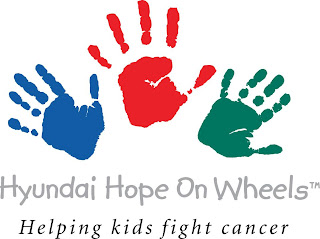 NEW YORK – April 5, 2012 – Hyundai Motor America and its dealers announced today, at the New York International Auto Show, a commitment to break through a major milestone of $57 million in total donations to pediatric cancer research through their nonprofit foundation, Hyundai Hope On Wheels®.  This level of funding places Hyundai among the leading funders of pediatric cancer research in the nation. As part of its 14th year in the fight against pediatric cancer, Hyundai’s President and CEO John Krafcik announced the 2012 effort and named C.J. George, a 13-year-old South Florida native and cancer survivor, the 2012-2013 Hope On Wheels National Youth Ambassador.

Hope On Wheels primarily provides research funds to non-profit children’s hospitals across the U.S. for pediatric cancer and seeks to build public awareness about the importance of this cause. The program is funded by Hyundai and its U.S. dealers. With every new vehicle sold in the U.S., Hyundai customers join Hyundai and its dealers in funding important life-saving research. Planned activities for 2012 will include a national grant donation tour, nationwide 5K race series, online social media campaign and a partnership with the Childhood Cancer Congressional Caucus. For the third consecutive year, during National Childhood Cancer Awareness Month in September, Hope On Wheels will conduct a comprehensive campaign to raise greater awareness about pediatric cancer and the need to fund critical research to find a cure.

"We see Hope On Wheels as a critical part of our mission at Hyundai,” said John Krafcik, President and CEO of Hyundai Motor America. "Pediatric cancer takes far too many young lives and impacts far too many families. We are proud to work with our Hyundai dealers to fund research to end this disease.  We congratulate each institution receiving our grants and commend them for the important work they are doing.”

In 2012, Hope On Wheels will donate $12 million to children’s hospitals nationwide for pediatric cancer research through its signature Hyundai Scholar Grant and Hyundai Hope Grant awards.  Hyundai Scholar Grants, in the amount of $75,000 each, will be awarded to 41 principal investigators who are pursuing innovative research early in their careers. As part of its Hyundai Hope Grant program, Hope On Wheels will award 36 grants to children’s hospitals across the country. This year’s Hyundai Hope Grants will be increased from $100,000 to $250,000 and winners will be announced in September.

Each of the Hope On Wheels grants will be presented to winning institutions at a Handprint Ceremony, where children diagnosed with cancer will place their handprints in colorful paint on a new Hyundai Tucson, the official vehicle of the program, to commemorate their battles with cancer.  Every Handprint Ceremony celebrates the courageous lives of the children faced with cancer and brings our community of supporters together.

The first grant award for 2012 was presented to the New York-Presbyterian/Morgan Stanley Children’s Hospital. The previous grant winner received its award as part of the kick-off activities and Handprint Ceremony that took place at the New York International Auto Show. The grant recipient Dr. Julia Bender has been named a Hyundai Scholar.

“Through research, we have made great strides in understanding pediatric cancer and treatments,” said Dr. Julia Bender, New York-Presbyterian/Morgan Stanley Children’s Hospital. “However, there is so much we don’t know about the late effects of treatment and we are researching ways to deliver care without any toxicity. I am proud to be a Hyundai Scholar and truly appreciate the resources Hyundai provides doctors like me to pursue my work to improve the lives of children.”

As part of this year’s program, Hope On Wheels’ newly-named National Youth Ambassador, C.J. George, will travel the country to share his message of hope with children, families and communities at Hope On Wheels events. C.J. was diagnosed with Stage III Acute Lymphoblastic Lymphoma when he was just 9 years old, and after his courageous battle and treatment at Joe DiMaggio Children’s Hospital in Hollywood, Florida, C.J. is now 13 years old and cancer-free.

“Every 36 minutes a child is diagnosed with cancer in the U.S. Through research 80 percent of those cancers can be cured. But that’s just not good enough,” said Gary Micallef, Hyundai dealer-owner of Hyundai of Everett in Everett, WA and newly-elected Chairman of the Hyundai Hope On Wheels Board of Directors. “The Hyundai dealers across America proudly join in this fight.  This is one we must win for our children, our communities, and our future.  We are proud to be a part of such an important cause.”

Also this year, research work will continue from Hyundai’s major investment in the Hyundai Cancer Institute at CHOC Children’s Hospital in Orange County. The hospital received its largest corporate gift in its history from Hyundai for the purpose of understanding DNA in young cancer patients through genomic medicine research.

Posted by Hyundai Dealer at 3:28 PM No comments:

You Are What You Eat

The President of the United States will host the annual White House Easter Egg Roll on Monday, April 9, 2012. Obviously, President Obama wants only the best for his guests. Therefore, he’s hired Willow Tree, a family owned business from Attleboro, Massachusetts to serve their famous chicken salad at this prestigious White House event.

While hearing about this prized dish makes you want to go all the way to Attleboro, Massachusetts just to try Willow Tree’s chicken salad, learning Starbucks’ key ingredient in their Strawberry Frappuccino may make you rethink your coffee store of choice. One would assume the red coloring of the Strawberry Frappuccino would be from the strawberries. Unfortunately, that’s apparently not the case. Starbucks uses cochineal, a red extract made from dried out cochineal bugs.

Starbucks says they want to move away from artificial ingredients. While this is a nice sentiment, the thought of drinking something that has crushed up bugs in it is a huge turn-off for me. While the FDA has announced cochineal as safe for consumption, one wonders what the Phantom Gourmet would have to say on the subject.

Thanks to the Phantom Gourmet team, Massachusetts passed its Restaurant Rejuvenation Act, which states that restaurants are allowed to serve alcohol Sunday at 10 AM. They then went on to form the Restaurant and BusinessAlliance, a state-wide trade association meant to give restaurants and businesses a strong voice in government and media.

Check out the Phantom Gourmet’s website, where you can find all you need to know about him, the various restaurants he’s visited, and any upcoming events.