Hyundai to Launch a Compact SUV, MPV and a new Hatchback: Official

In an earlier report published on CarDekho, we talked about Hyundai's plans of launching a new hatchback to rival Maruti Suzuki Swift. The said hatchback will sit between the company's flagship hatches i10 and the i20, taking the total no. of hatchbacks to five. Now a report published today on ET confirms the same, it also reveals that there will be "a slew of products for the Indian market , including a compact SUV, an MPV as well". This has been confirmed by none another than Hyundai's CEO and MD, BO Shin Seo.

Image used for represenation purpose only

Seo also said that the company's focus will be on diesel engines, the company has recently made investments in diesel engine capacity. Speaking to TOI, Seo said that "the HMI will launch a small SUV soon The SUV will COME earlier, followed by an MPV ".

Hyundai's arch rival Maruti Suzuki India has already launched the Ertiga MPV, while it still doesn't have anything in the growing compact SUV/MPV segment. On the other hand, the newly launched Renault Duster has already been doing superb in terms of sales, Ford is ready with its compact Crossover, the EcoSport and Chevrolet Enjoy MPV will be here anytime soon. So, it has become more a necessity now for Hyundai India to launch a good product to earn the market share in this space.

Hyundai India is keeping its focus on diesel run cars, diesel vehicles accounted for 28% of the company's total sales. "We have invested $ 300 million in a new diesel gasoline flexible plant which has a 3,00,000-unit capacity. The flexi assembly line future-proofs us from any changes in the government's fuel POLICY, the while at the same time it Protects us from currency fluctuation since we no longer import diesel engines, "he said.

Speaking about the new compact car, Seo says "between the i10 and i20. It will create a completely new segment and will have better pick -up and performance than the i10 segment ". Denying that Hyundai will get into sub-Eon segment, he said, "Our Brand POSITIONING is On all about modern premium, so we will not go below the Eon, "said Seo.

Stay tuned to CarDekho for all the latest updates on upcoming Hyundai cars, Cheers!
source
Posted by Hyundai Dealer at 3:12 PM No comments:

Hyundai Equus: A Few Rungs Up the Social Ladder 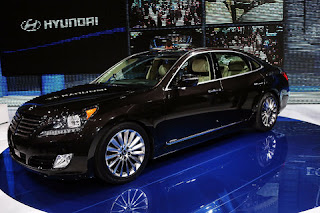 What is it? A refreshed version of perhaps the biggest social climber in luxury cars, Hyundai’s roughly $60,000, full-size sedan.


Is it real? Dismissed by some critics as a poseur, the Equus has established a modest toehold in a class dominated by far pricier models from Mercedes, BMW, Lexus and Audi.


What they said: John Krafcik, chief executive of Hyundai Motor America, said the Equus led every car in the industry – luxury or mainstream — in J.D. Power’s most recent customer satisfaction survey. Customer service has been an Equus hallmark, including free iPads and owner perks; dealers pick up cars from owners’ homes and return them following service visits.


What they didn’t say: How quickly Hyundai can advance the Equus from its generic large-car styling to something resembling its well-received HCD-14 Genesis concept car.


What makes it tick? The formidable 5-liter, direct-injection V-8 with 429 horsepower and 8-speed automatic transmission carry-over from last year’s model. The air suspension is retuned, hopefully lending the Equus the sophisticated dynamics it currently lacks. But the Equus is noticeably gussied-up inside, with more convincing wood, aluminum, leather, display screens and features.


How’s it look? No threat to design leaders like the Audi A8 or Jaguar XJ. But the Equus is more convincingly deluxe, especially inside, where it looks more Lexus, less Buick.

Posted by Hyundai Dealer at 10:02 AM No comments:

Mar 27, 2013 10:00 AM EDT
NEW YORK, March 27, 2013 /3BL Media/ PRNewswire/ -- Hyundai Hope On Wheels®, a nonprofit organization dedicated to helping kids fight cancer, today announced that Nolan Gould, star of the Emmy Award-winning comedy series Modern Family, will join the organization for its 2013 launch activities in New York City. Yesterday at the NASDAQ MarketSite in Times Square, Nolan Gould was on hand as Hyundai Motor America and its dealers rang the Closing Bell to commemorate their 15th year in the fight against pediatric cancer through Hyundai Hope On Wheels.

"Being in New York with Hope On Wheels, I'm learning firsthand the immense impact cancer has on thousands of kids throughout the country," said Nolan Gould. "I believe us kids coming together to help other kids can send a powerful message and bring greater awareness to this important cause. I congratulate Hope On Wheels on its 15th year in this fight and encourage everyone to give hope a hand."

To increase public awareness for childhood cancer, Hyundai Hope On Wheels has launched a new social media campaign called, "Give Hope A Hand." Throughout the year, supporters are invited to join the cause by snapping a photo of their hand and sharing it on social media outlets. Visit www.HyundaiHopeOnWheels.org/hope to find out more.

"We congratulate Nolan for participating in the Hyundai Hope On Wheels program launch this week," said Zafar Brooks, Program Director, Hyundai Hope On Wheels. "His celebrity status and willingness to be involved with such a worthwhile cause will no doubt help boost awareness for the program. We appreciate his support."

HYUNDAI MOTOR AMERICA
Hyundai Motor America, headquartered in Costa Mesa, Calif., is a subsidiary of Hyundai Motor Co. of Korea. Hyundai vehicles are distributed throughout the United States by Hyundai Motor America and are sold and serviced through more than 820 dealerships nationwide. All Hyundai vehicles sold in the U.S. are covered by the Hyundai Assurance program, which includes the 5-year/60,000-mile fully transferable new vehicle warranty, Hyundai's 10-year/100,000-mile powertrain warranty, and five years of complimentary Roadside Assistance.

Check us out on Facebook and YouTube. Our Holyoke dealership currently has 1,294 friends and our Enfield dealership has 552 friends. Join us and out and find out if our friends are also your friends.
Our Facebook pages are a place where we get to communicate with our
customers. We get to show what we are doing in our dealerships in real time. It gives
customers the opportunity to also communicate with us and share things that
they might have not otherwise share. With our Facebook pages, we are always
giving away prizes. It’s fun and helps us as a company to be with the Social Media movement. 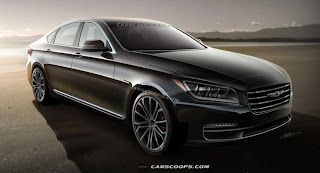 Now, when someone asks what type of car you drive, and you answer with 'Genesis', more often than not, you'll receive a puzzling blank stare. However, one need not to be offended; Hyundai'sentrant into the luxury car segment is still a relatively new player.


Revealed at the 2008 North American International Auto Show, it was Hyundai's interpretation of a luxury sedan to compete with the Euros. While sales of the first generation haven't exactly taken the world by storm, those enthusiastic boffins from South Korea are not waving the white flag just yet.


In fact, they're so intent on making inroads on the luxury sedan market that they're having a second attempt, with the reveal expected either later this year or early 2014. While the current Genesis Sedan has a reasonable amount of kit for the dollar, it struggles to exude a visual statement compared to its direct competitors.


Hyundai's next installment hope's to change that; so based on actual spy-shots depicting the real thing, we at Carscoops are providing an illustrated glimpse of how things have improved.


The Peter Schreyer-led team has translated a fair chunk of aesthetic punch from the HCD-14 Concept car that debuted at this year's Detroit motor show, and infused it into the bodywork of the next Genesis.
Hyundai's Fluidic Sculpture design language is complemented with smooth surfacing and shorter overhangs; while the long powerful hood and imposing 'Bentley-like' grill conceal what is expected to be either a 3.8L V6 or a 5.0L V8. Mated to an eight speed transmission (with a 10-speed unit to be introduced later on), the Genesis is also expected to offer both rear wheel drive and all-wheel drive configurations for those who live amongst the more slippery geography.


Detailed visual highlights start with the LED head and taillights; tackling Audi where so much design emphasis has been placed in the recent past, and strategic placing of chrome-work.
Even the shut-lines have been carefully thought out with fluidic intersecting joins at the base of the windscreen and rear bumper. Whilst the greenhouse could have been transferred from the latest Toyota Avalon or Chevrolet Impala, a prominent shoulder crease runs the length of the car linking head and taillights together in a broad sweep.
Compared with the likes of Jaguar XF, Mercedes E-Class, and BMW 5-Series, the next Genesis appears to be a strong contender. However, does it go far enough? One cannot help wonder if staying closer to the HCD-14 Concept in design would have yielded a greater statement. Tell us what you think in the comments below.

Posted by Hyundai Dealer at 8:08 PM No comments: