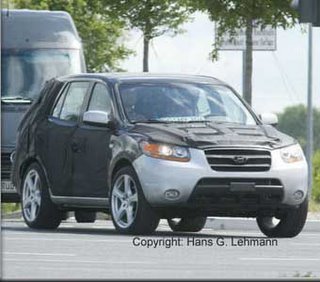 First Spy shot found, caranddriver.com/edmunds.com/thecarconnection.com
Spied! 2007 Hyundai Santa Fe
PHOTOGRAPHY BY HANS G. LEHMANN/HIDDEN IMAGE
August 2005
caranddriver.com
These photos capture a prototype Santa Fe without any front-bumper disguise, thus giving us a clear view of the SUV’s bold new looks.
With the new Hyundai Tucson filling the role of compact SUV in the model lineup, Hyundai is now free to grow the Santa Fe in size and move it up to compete with larger SUV’s like the Nissan Murano and Toyota Highlander. The increased size will allow the Santa Fe to have a third row of seats for the first time. The new Santa Fe will be built on a platform that is shared with the new Hyundai Sonata sedan, and the Santa Fe will also be built at Hyundai’s new plant in Montgomery, Alabama.
Styling is all new and ditches the quirky looks of the current Santa Fe in favor of a modern bold look with a large forward-sloping grille. The rounded shape of the front-end gives the new Santa Fe a unique design by eliminating the typical protruding bumper used on every other SUV.
2007 Hyundai Santa Fe Will Be Bigger, More Stylish By Phil Lienert Date posted: 07-14-2005
edmunds.com
The addition of the Hyundai Tucson compact SUV to the company's lineup has given Korea's top automaker the opportunity to expand its flagship SUV. As you can see from these photos, the 2007 Hyundai Santa Fe will be considerably larger than the current 2005 Santa Fe and will be positioned within the brand to compete with more upscale vehicles.
Also evident from our spy shots is the change in design direction for this upcoming version of the Hyundai Santa Fe, due out toward the second half of 2006. The company has more or less replaced the 2005 Hyundai Santa Fe's awkward lines with a more sculpted and distinctive look.
An increase in its overall length will allow the 2007 Santa Fe to contain, for the first time, a third row of seats, moving it more or less into the same class as larger Japanese SUVs such as the Honda Pilot and Toyota Highlander.
The 2007 Santa Fe's interior should be more refined than the current edition in order to match the exterior's move toward a less quirky appearance. Hyundai had more room to work with the Santa Fe this time around as the Tucson has now assumed the role of its entry-level SUV.
Hyundai was able to increase the 2007 Santa Fe's size by moving the vehicle's construction to the same platform that was used to build the brand-new 2006 Sonata sedan. And like the Sonata, the 2007 Santa Fe will be built at the company's recently opened facility in Montgomery, Alabama.
Don't expect any big surprises under the hood of the 2007 Hyundai Santa Fe. In fact, it's likely that the vehicle will carry over the 2005 Santa Fe's 3.5-liter V6, perhaps with a little bit more in the way of horsepower, though.
Look for the official debut of the 2007 Hyundai Santa Fe at the 2006 North American International Auto Show in Detroit. 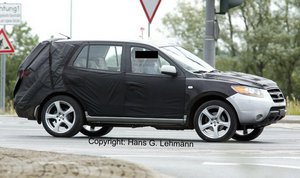 Spy Shots: ’07 Hyundai Santa Fe Coming to America, the long way. by Hans Lehmann/Hidden Image (2005-07-11) thecarconnection.com Hyundai has been on a new-product blitz, bringing to market one new vehicle after another. So far Hyundai has introduced the Tucson and the Sonata, and has put out official information on the Azera. Still to come is an all-new Hyundai Santa Fe sport-utility vehicle. These photos capture a prototype Santa Fe without any front-bumper disguise, thus giving us a clear view of the SUV's new looks. With the new Hyundai Tucson filling the role of compact SUV in the model lineup, Hyundai is now free to grow a larger Santa Fe and move it up a size class to compete with larger SUVs like the Nissan Murano and Toyota Highlander. The increased size will allow the Santa Fe to have a third row of seats for the first time. The new Santa Fe will be built on a platform that is shared with the new Hyundai Sonata sedan, and the Santa Fe will also be built in Hyundai's new plant in Montgomery, Alabama. Styling is fresh and ditches the voluptuous looks of the current Santa Fe in favor of a look with a large, forward-sloping grille. The rounded shape of the front end gives the new Santa Fe a unique design by eliminating the typical protruding bumper used on every other SUV. 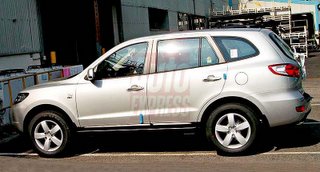 Bigger is better for Santa FE Tuesday 15th November 2005 autoexpress.co.uk Christmas has come early at Auto Express - our spy photographers have caught Santa Fe on film. This amazing picture reveals Hyundai's all-new SUV totally undisguised and ready for the road, months ahead of its official launch. Left exposed in broad daylight, the new Santa Fe's sleek lines are a radical departure from the bulbous look of the existing version, and help take the model upmarket. Set to go on sale in the UK next autumn, the 4x4 will be available with a choice of petrol and diesel engines. And the VGT - Variable Geometry Turbo - badge on the side of this car reveals it's the 2.2-litre oil-burner, which is likely to be the top seller. The new Santa Fe will be larger than the outgoing model in order to widen the gap between it and the smaller Tucson. The extra size has allowed engineers to fit a versatile seven-seat interior - making the off-roader a viable alternative to a full-size MPV. Expect plenty of equipment as standard, too, while Hyundai's pioneering five-year warranty will also be a major selling point. Prices have yet to be finalised, but more details are likely to be announced closer to the car's official unveiling at the Geneva Motor Show in March next year. Following the launch of the Santa Fe, Hyundai will then turn its attention to its larger 4x4s. While the Terracan will continue unchanged until at least 2008, a new big off-roader is already being developed in the US to offer a cut-price alternative to Land Rover's Discovery. Chris Thorp 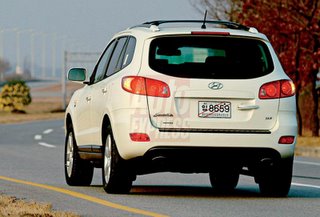 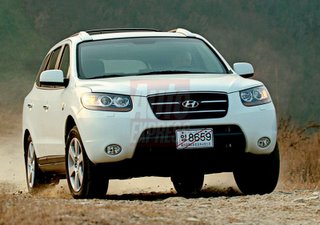 Hyundai Santa Fe December 2005 autoexpress.co.uk Getting established in the SUV market isn't easy - just ask Hyundai! The firm already has three 4x4s in its line-up, but only the entry-level Tucson is capable of challenging for class honours. That's a situation the all-new Santa Fe hopes to change. Designers have banished memories of the current bulbous and ungainly machine to the history books, and instead have created a distinctive looking five-door SUV. Inside, the makeover is almost as striking, but although the cabin has a more upmarket feel, and for the first time seven seats, the plastics still appear cheap. As with the Sonata saloon, the Santa Fe has a prominent centre console, but the layout has been brought up-to-date. While a 2.7-litre V6 petrol variant will be available, the 151bhp 2.2-litre diesel driven here should account for most sales in the UK. Replacing the outgoing 2.0-litre oil-burner, the new unit delivers an extra 36bhp and an impressive 343Nm of torque. From a standstill, the diesel engine is a little unresponsive, but once on the move it provides smooth acceleration whether mated to manual or automatic gearboxes. A part-time four-wheel-drive transmission system also ensures the Santa Fe is never short of traction, as it feeds power to the rear wheels when the front tyres slip. Engineers have fitted stiffer suspension to the new model, and as a result the Santa Fe doesn't offer as smooth a ride as the class-leaders. The benefit comes in the corners, where body roll is more controlled and handling is impressive in all but the tightest of bends. Safety hasn't been forgotten either, with six airbags, EBS, ABS, traction control and active headrests all available. Prices are expected to rise over the current version, with the line-up likely to start at around £21,000. We'll have to wait until we drive the Santa Fe in European specification to see if Hyundai has got a potential class-leader in its ranks, but the early impressions are encouraging. Charley Chae 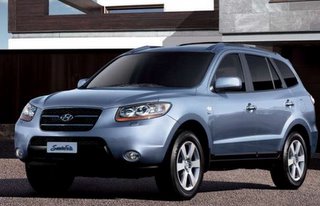 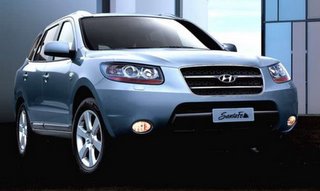 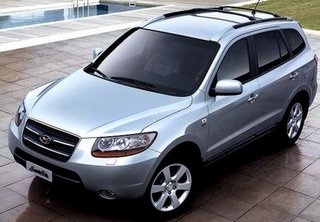 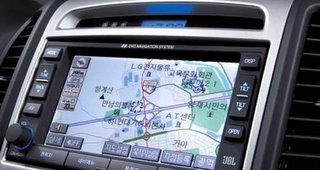 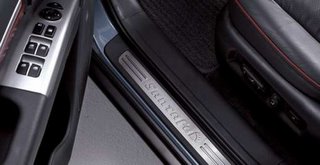 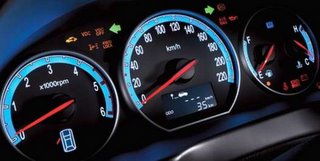 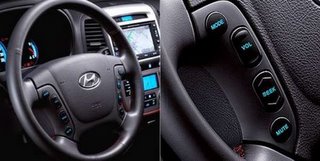 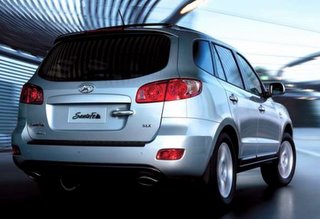 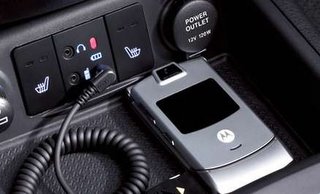 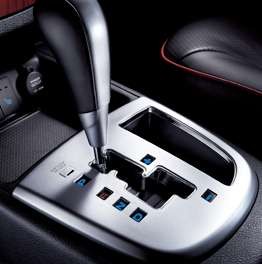 2007 Hyundai Santa Fe launches in Korea Posted Nov 22nd 2005 3:30PM by Stuart Waterman Filed under: SUVs autoblog.com Little information other than what we can glean from the pictures, but what we can see shows that the new Santa Fe is a huge improvement over the current version. Hyundai's Santa Fe-dedicated website is here (warning - lots of Flash). Autoblog reader Source1 reports that a Hyundai dealer told him that we can expect two engines, a 3.3-liter putting out 240-250 hp, and a 3.8-liter with 275-285 hp. Much more after the jump!
Pictures from the Hyundai Official Santa Fe webstite here. 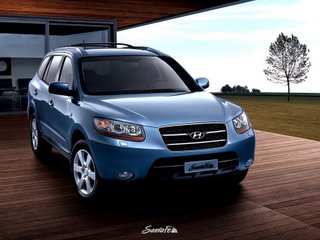 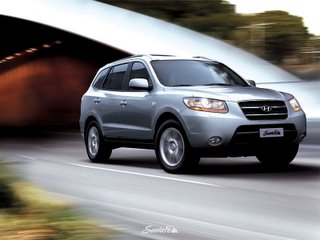 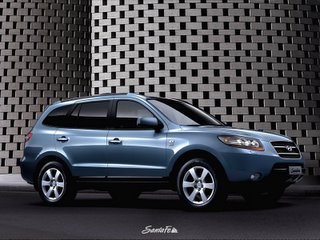 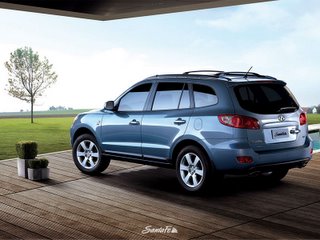 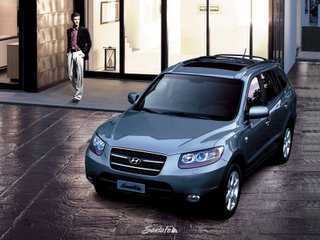 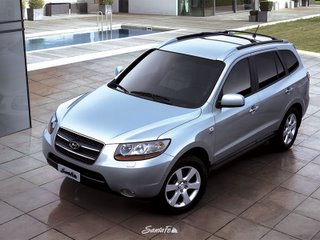 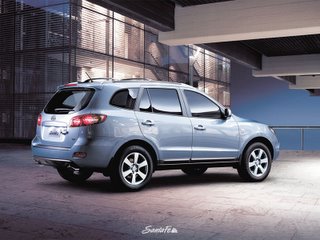 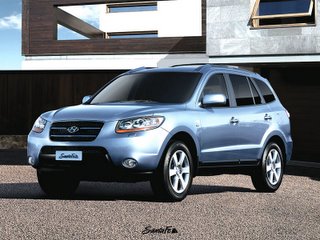 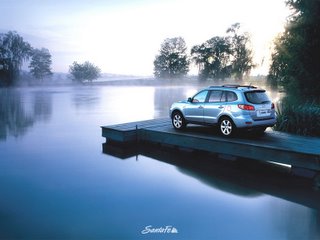