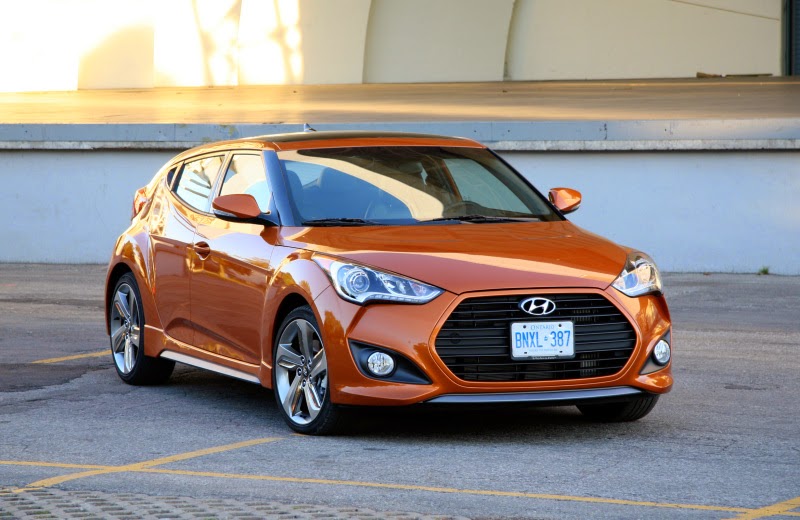 It’s been just over three years since Hyundai unveiled its Veloster, and yet it still looks as fresh as the day it debuted.

While obviously related to the Accent and Elantra, the Veloster is the most extreme example of Hyundai’s Fluidic Sculpture design ethos and one of the most original looking vehicles on the road today.

For 2014, the Veloster is largely unchanged – all models now come with LED driving lights, a backup camera system and driver’s blind spot mirror. Turbo models, such as this week’s tester, and those equipped with the Tech package, boast heated steering wheels and power adjustable lumbar support. 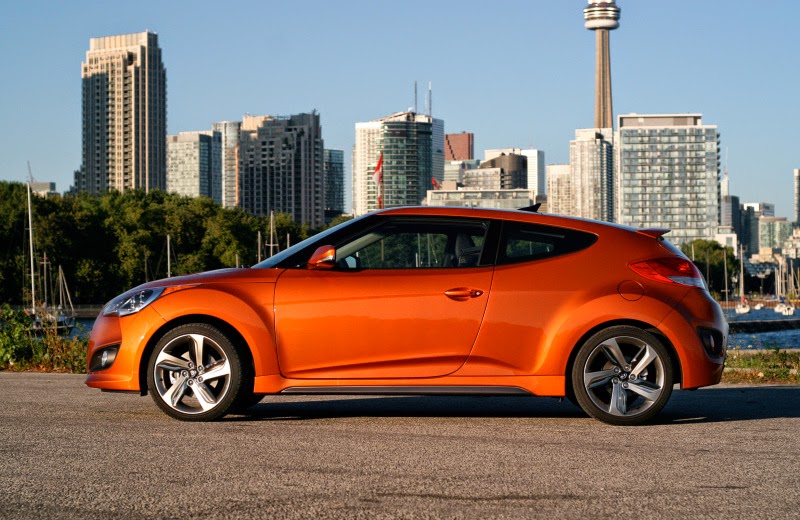 There was a lot of buzz surrounding the Veloster’s arrival, and given its radical styling, many were anticipating the birth of a brand-new hot hatch to go up against the likes of the Volkswagen Golf GTI, Mini Cooper S or Ford Focus ST. Count me among those who were disappointed by their initial test drive – while I liked the Veloster well enough, what I really wanted … was to love it.

Not that there’s anything wrong with it. On the contrary, the Veloster is a most agreeable little car, offering a lot of value, and decent fuel economy wrapped in a refreshingly creative design. But it was really hard for it to overcome the buildup preceding its arrival. “The Veloster was never meant to be a hot hatch,” said Patrick Danielson of Hyundai Canada. Conceived as a playful, affordable coupe-slash-hatch to appeal to a younger demographic, the Veloster obviously resonated with the performance crowd, which, of course, immediately began clamouring for a high-performance version.

At the time, Hyundai was loath to confirm whether a hot hatch Veloster was in the works. But during a visit to the company’s Namyang Research and Development Centre in South Korea, a curious colleague and I wandered too close to a tarp-covered shape that we suspected was the rumoured-to-exist Turbo Veloster, unleashing an irate volley of Korean from the security guards. 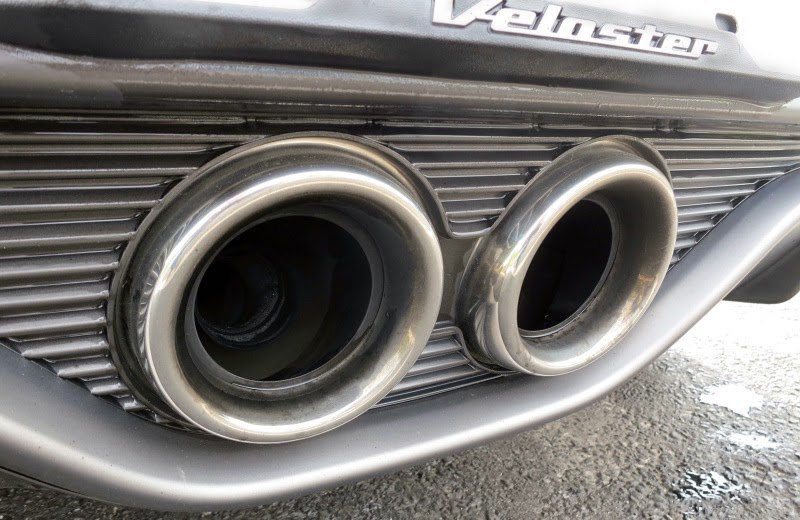 The Veloster Turbo did indeed receive an injection of power, bringing its output to 201 horsepower from 138, but it was essentially the same vehicle as the non-aspirated model. While the base suspension was perfectly adequate for trundling around town, it was overwhelmed by any “spirited” driving.

There are no suspension upgrades on the Turbo for 2014 – for that you’ll have to opt for the Turbo R-Spec, a stripped down version with specifically tuned suspension and steering, a B&M short shifter, and all the outlandish design cues a boy-racer’s heart could desire. 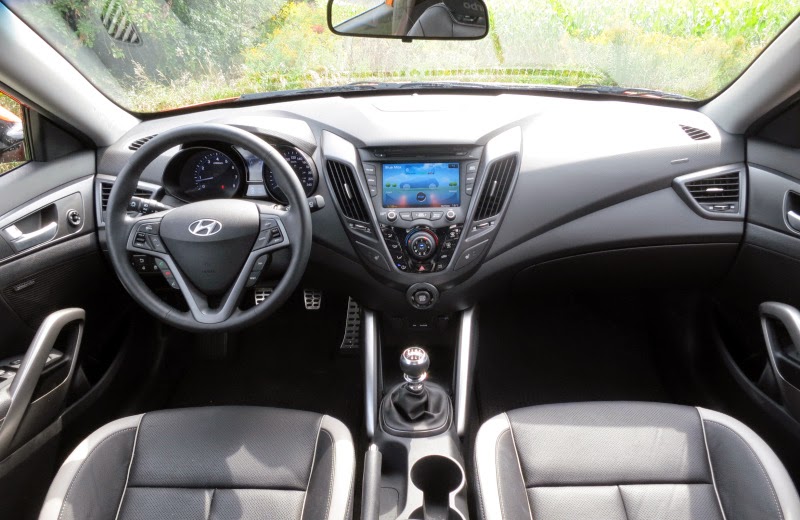 Turbos and base models have the same front strut, and rather archaic torsion beam rear axle setup – which limits its athleticism considerably.

However, both the Turbo and R-Spec models now come with a torque vectoring control system called “Active Cornering Control”(ACC). Using the wheel-speed sensors and electronic stability control, ACC applies braking to the inside front wheel during hard cornering – driving the power to the outside front wheel for improved grip and quicker acceleration upon exit.

With its bright copper sheet metal, my coupe-meets-hatchback tester is funky enough to appeal to a younger demographic, but not so outrageous that a more “mature” driver would feel ridiculous in it. Courtesy of a blacked-out, hexagonal grille, side skirts and unique rear diffuser, the Turbo projects a more aggressive attitude than the base Veloster. 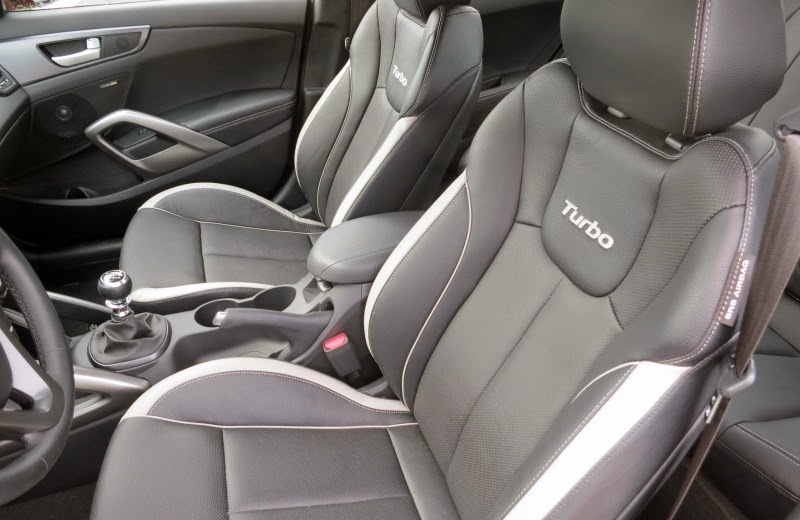 The playful design theme continues inside, with enough geometric shapes, splashes of colour, and technology to make a gamer feel right at home. Hyundai’s a perfect example of what creative minds can do with budget materials. Although there’s an abundance of cheap, hard plastics – there’s no shortage of shapes and textures and, overall, the atmosphere is lively and fun.

Of course, given its targeted demographic, the Veloster Turbo’s cabin is packed with technology. Standard is a backup camera, touchscreen navigation, Bluetooth, USB input and iPod connectivity. There’s an eight-speaker and a 450-watt sound system with a thumping subwoofer. 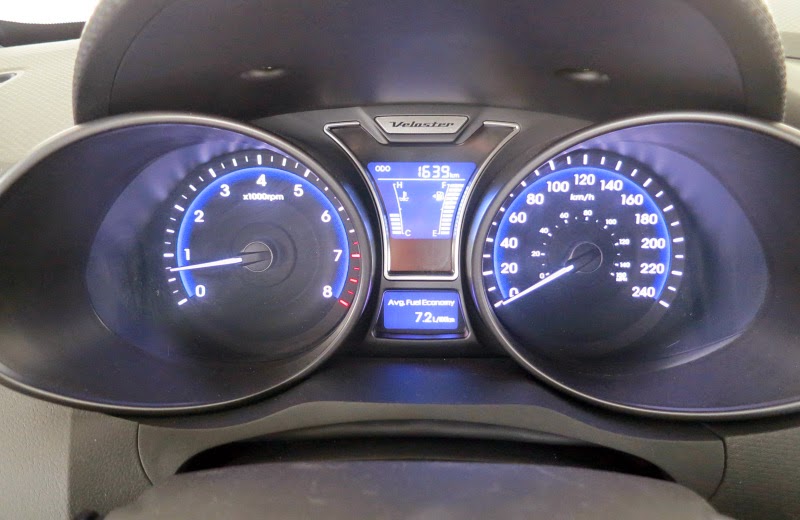 Turbo-embroidered sports seats are quite supportive and comfortable, and the driver’s seat is height adjustable.

The signature, asymmetrical third door makes clambering in and out much easier for rear passengers, but the raked roofline does cut into their headroom space.

For such a compact car, you can certainly stuff a lot of baggage into its rear boot. Cargo space is 440 litres, but that increases to 983 when the 60/40 split rear seats are dropped. 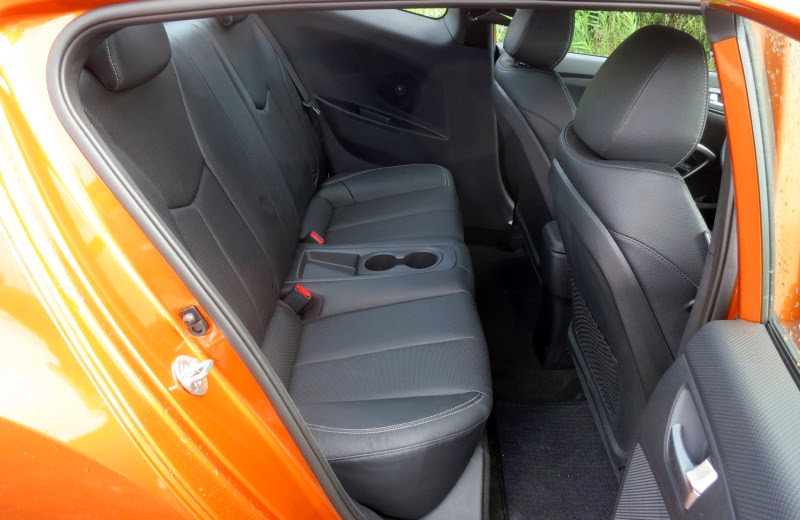 While it’s usually more engaging to operate a stick shift, rather than leaving it to an automatic transmission, swapping cogs on the Veloster Turbo really isn’t all that fulfilling. The clutch take up is vague and the shifter itself lacks the satisfying snickery of a true driver’s car. Without a modulated use of the gas pedal, the short first gear had me leaving stoplights with an embarrassing screech. But it certainly is forgiving. The neophyte driver will find this gearbox nearly impossible to stall.

Drivers looking for genuine engagement would be better served by a Fiesta ST. However, the Veloster Turbo offers more features, and a lower price tag than competitors like the Mini Cooper S or Volkswagen GTI.

Personally, I’d forgo the Turbo in favour of a six-speed base model with Tech Package, an equally pleasant little vehicle that’s nearly $5,000 cheaper and easier on fuel.

Source
Posted by Hyundai Dealer at 8:29 AM