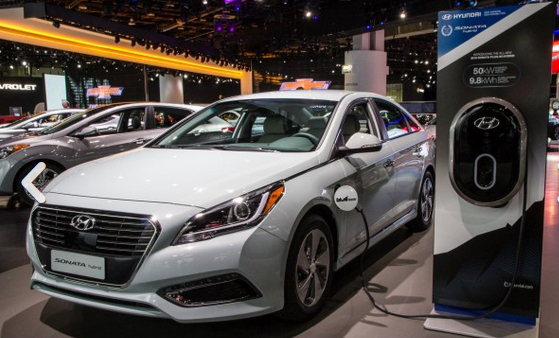 The Hyundai Motor Group, encompassing both the Hyundai and Kia brands, is known as one of the most aggressive competitors in the global auto business.

And the company has big plans for expanding its lineup of green vehicles, as we learned in an interview last week with Ki-Sang Lee, a senior vice president who's head of its R&D Center for "eco-friendly vehicles."

We spoke with Lee and several other company executives at last week's Detroit Auto Show, at which the company launched its 2016 Hyundai Sonata Hybrid and Plug-In Hybrid models.

The following questions have been condensed and reworded from a wide-ranging interview. They summarize the points made by Lee and his colleagues about future green vehicles from Hyundai.

How does the 2016 Sonata Plug-In Hybrid differ from the regular hybrid model?

We have increased the output of the electric motor from 38 to 55 kilowatts (51 to 74 horsepower), so it can power the car alone in charge-depleting mode.

We consider this system to be the second generation of our hybrid technology, after we launched our first hybrid for 2011 and revised it for 2013. The engine is smaller (it is now 2.0 liters), and the battery is more compact.

For the plug-in hybrid, drivers always want more electric range, but they don't think about the price. They just say they want a range that's as long as possible.

Extra battery capacity in a plug-in hybrid is often unnecessary, something that drivers don't use often, and it increases the weight and the price of a vehicle.

We think about the price of the whole system. We believe that up to 30 miles of electric driving can be provided at a reasonable price, and it will cover more than half of the daily driving people do in the U.S.

How will you evolve that system in years to come?

The third generation of our hybrid system will come next year, in our dedicated hybrid vehicle.

That will use our dual-clutch transmission (now offered in the U.S. only in the 2015 Hyundai Sonata Eco model), rather than the adapted six-speed automatic transmission in today's hybrids.

We have developed range-extended electric vehicles in our research labs, but only to prepare for possible future use.

We have not decided yet if that is a technology we would offer.

So Hyundai will have hybrids, plug-in hybrids, and a dedicated hybrid-only vehicle soon; what about electric cars? 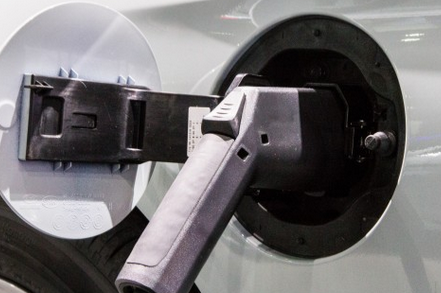 The platform we will use for the dedicated hybrid can also be used for plug-in hybrids and battery-electric vehicles, with only minor changes to the exterior.

But these are relatively small vehicles, for use as city cars. For larger vehicles that cover longer distances, we believe the hydrogen fuel cell is the solution.

But we are also preparing higher-capacity batteries. Perhaps we will offer optional systems that provide more range, but they will come at a higher price.
Lithium-ion batteries still have room to improve. We guess that by 2040 or 2050, we will have a next generation of energy storage for vehicles with a dramatic increase in energy density.

That will allow pure electric vehicles to increase their range beyond 180 miles. But we still feel hydrogen fuel cells will be at the top of the range.

How do you see hydrogen fuel-cell vehicles evolving?

Infrastructure is a challenge, of course. We are a car company, and we will work with partners--like First Element Fuel. We have been talking to many partners for several years.

Each country will have its own strategy for providing hydrogen fuel. Right now, government agencies in Korea and in the state of California are very supportive.

But the infrastructure is very complicated--and we have to make a profit on the cars we sell.

What led Hyundai to choose a one-motor hybrid system, rather than the two-motor design used by Toyota and Ford?

We think that hybrids will rise to 10 to 15 percent of the global market in the future. But customers are still hesitant, based on the price of the cars.

We decided to use one electric motor to reduce the total system cost. That gives us more room than the competition in pricing the overall system.

Also, our setup allows the electric motor to assist even at highway speeds.

Perhaps we have a little bit of a handicap in city driving, but at higher speeds, our hybrids can use both the engine and the motor. In two-motor systems, one of those motors is used only to control engine speed.

So we may have efficiency that's slightly lower in the city--perhaps 3 to 5 percent--but we gain 10 percent or more at highway speeds over the efficiency of the twin-motor design. For American use in particular, that's important.