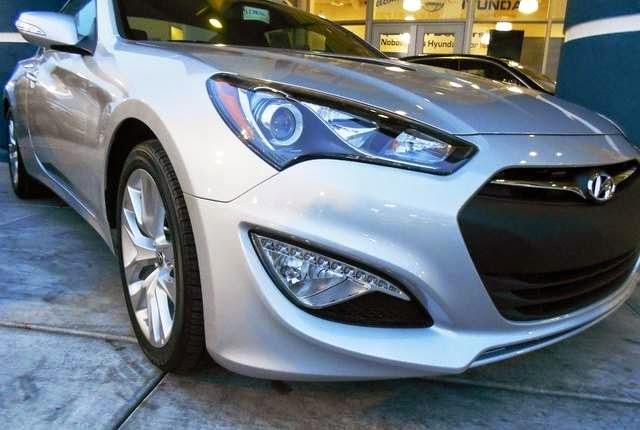 The car has daring design and a 3.8-liter direct-injected 348-horsepower V6 engine that generates a throaty growl the result of a tuned exhaust and a direct-injection technology.

The Genesis Coupe, which comes with a six-speed manual transmission or an eight-speed Shiftronic transmission, has created a long list of impressed customers at Planet Hyundai Centennial, 6200 Centennial Center Blvd.

The Coupe was tested at Pikes Peak International Hill Climb west of Colorado Springs, Colo., where competitors race to the clouds. In the 2013 competition, a Genesis Coupe prototype built by Rhys Millen Racing beat the record set the year before by 44 seconds.

With the 2015 Genesis Coupe, Hyundai improved on an already popular car.

“I really like the laser dynamic cruise control,” dealership Internet manager Chris Rooney said. “It also has a lane departing warning system that includes a video. If you go outside the white line, it will flash a warning to let you know you’re going into the other lane without your turn signal. If you’re drifting and not paying attention, it will counteract that, let you know what’s going on and pull you back into the right lane.

“The Genesis Coupe almost drives itself. It’s almost like autopilot.”

Rooney said an auto hold feature keeps the driver in the position until the gasoline pedal is engaged — another key Hyundai safety feature.

“If you’re in bumper-to-bumper traffic and come to a full stop, you can take your foot off the brake because auto hold keeps you stopped until you put your foot on the gas pedal.”

Cross traffic alert warns of traffic coming from in front, behind or beside the car, Rooney added.

As with all new Hyundais, the car comes with a 10-year and 100,000-mile power train warranty along with the five-year, 60,000 bumper-to-bumper warranty.