This year the Hyundai Santa Fe is basically two different vehicles; one seating 5, and the other up scaled to seat 7. The smaller being called a Sport, and the larger taking the place of what was formerly the Veracruz, now named just Santa Fe. The Sport is being built here in America in Hyundai’s Georgia plant, with the larger Santa Fe being imported from Korea.

Our week was spent inside the American made Sport model equipped with a turbo charged engine and exterior looks, that in our opinion are the best yet to come from the Hyundai designers. The sheet metal that wraps the vehicle is now more masculine and well defined that which ever should in effect turn the heads of more men…. encouraging them to take a look at this new crossover.

Up front, the Sport features a hexagonal grill that has become synonymous with the Hyundai brand; with this they have two toned the sport model grill to add a more aggressive and sporty look. Accented on each side with fog lights, new HID headlamps and LED daytime running lights that rounds out the new look. We were very impressed with the new look up front on the Santa Fe, as it tied the whole vehicle together with the new lines running down the sides to a now lower rear roofline that produced one fine looking crossover that will have other manufactures taking note of this strong new design.

We really enjoyed the peppiness of the 2.0 liter turbocharged power plant that produced a very nice 265 horsepower and 269 ft.-lbs. of torque. It was surprising to us how much power that small of a motor provided to a midsized crossover like the Santa Fe. This should have come as no surprise as our test a couple of weeks ago in the Kia Sorento proved to be quite the same in a similarly sized crossover, but with no turbo charger. EPA put the Santa Fe at 21 mpg combined, we however hit 22.9 combined for the week of normal driving with one trip to Salt Lake. 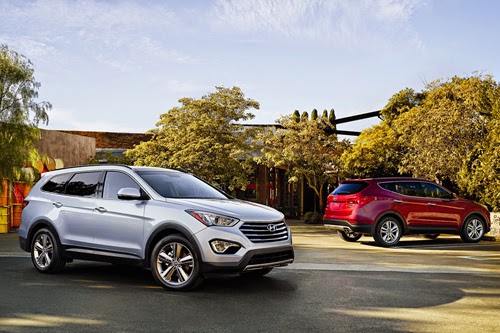 The Santa Fe had no problem getting up to speed on the freeway or having all the passing power we could have asked for when overtaking other vehicles. We had the opportunity to retrieve our son JaCaoby and his wife Hailey from the airport and even loaded up with 4 adults that sport at no problems with the drive home.

The folks at Hyundai have included a three different steering setting on the Santa Fe, called driver selectable steering modes, they were comfort, normal and sport, we found the sport setting the best setting to drive in as the steering response was stronger and more defined, normal was okay, but comfort just seemed a bit sluggish to us.

The Santa Fe Sport comes with all kinds of standard features, many of which we would not have expected to be standard as they are usually an upgrade of some kind. Leather seating surfaces are usually not a standard option, but with the sport they were and included heat, there was also blind spot monitoring and rear cross path detection to add to the safety of the drive, also not a usual standard feature.

There were also windshield wiper deicers included, but with the warm winter we have been having, we didn’t’ have the opportunity to try them out, the heated side mirrors come in quite handy on a frosty morning. Push button start and keyless pushbutton doors are becoming more expected, and included standard on many vehicles, but the exterior illumination when approaching the vehicle certain is not…. but the Santa Fe had it standard.

Our favorite option included in the standard package was also something we had experienced with the Sorento, if your hands were full of bags, boxes whatever, just approaching the rear of the vehicle and standing the for a second or two would start the rear hatch opening automatically! There are vehicles out there that will open the hatch with a wave of the foot underneath, but this was even easier. The designers had also included a large storage compartment under the rear carpet that was full of different sized bins, turned out to be the perfect place for groceries, and they wouldn’t roll or slide around the back on the way home from the store.

There were some other standard features that caught our eye, manual sunshades that we could put up in the two rear doors, a great feature for those with little ones to help keep the sun out of their eyes, and more than that something we have only seen in very luxury oriented vehicles, and yet it is such a simple thing to add. There were also the standard Bluetooth connections to phone and music, although the voice commands were a little cumbersome to make a phone call, mostly the system just asked too many questions before actually making the call.

Both of the front seats were powered and the rear seats did adjust with a slide forward and back, and would recline some to help with rear passenger comfort. Another design element that we noticed was that the rear seat split 40-20-40, not the usual 40-60 as most vehicles. This allowed for the center to be folded flat and longer objects transported, while still allowing plenty of room for two adults, we had to give this idea two thumbs up for being very unique and innovative.

The only addition to our Santa Fe was what Hyundai called the Ultimate package, and at over $4000 it added pretty much everything else we could have wanted to make it stand out. The wheel size went to 19 inches instead of 18, LED taillights appeared in the rear, and a huge panoramic sunroof dominated the roof and was very nice even in February with the warmer weather we experienced a definite must for summer driving.

Both of the front seats upgraded to have ventilation with the drivers actually acquiring a memory function to accommodate two different drivers, and the rear seats go heated! A new 8- inch touch screen replaced the 4- inch screen, and came with navigation and a new Infinity surround sound system. We felt the cost was definitely worth it with all the creature comforts that came making driving that much more enjoyable.

Hyundai also comes with one of the best warranties in the business, with a 5 year 50,000 mile new vehicle warranty along with a 5 year roadside assistance warranty, really a great deal when most manufactures are only offering 3 year 36,000 miles, say that Hyundai is ready to back up their products with more than just talk. They do take care of their customers, as our son Landon found out 3 years ago when his Sonata had a problem down in the Payson area, and Hyundai paid to have it towed back to the dealership!

See the new Hyundai Santa Fe Sport today at Murdock Hyundai at 452 S Lindon Park Dr, Lindon (866) 623-1120. You won’t be disappointed in what has gone into this new vehicle, it is a must see.