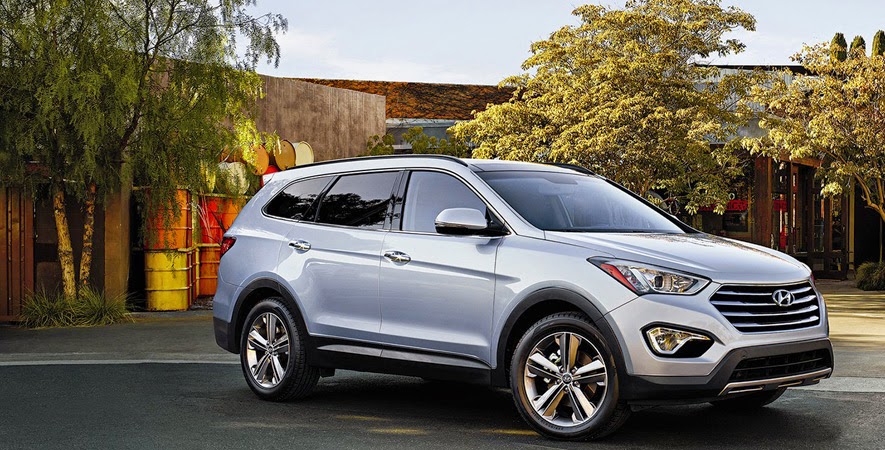 MALBAIE, PQ: With February officially being one of the coldest months on record in several provinces, having the benefit of all-wheel-drive is becoming a must-have feature for an increasing number of Canadians.

During February, I took part in four winter driving events in Quebec involving six cars and CUVs where the advantages of AWD left me in no doubt what I will have on my next vehicle.

The transparency, cost effectiveness and ease of operation without the high fuel consumption of first-gen systems is what makes AWD so attractive.

One of those vehicles tested was the 2015 Hyundai Santa Fe XL.

There are actually two Santa Fe models, the five-seater Sport and the six- or seven seat XL as driven in Quebec.

All XL models use the well known and reliable 3.3-litre direct injection V6 shared with Kia, putting out 290 hp and 252 lb/ft of torque through a six-speed Shiftronic automatic transmission with manual shift mode.

In addition, all Santa Fe models have an Active Eco system that changes engine and transmission mapping for smoother shifting that results in real world fuel savings by up to seven per cent.

Except for the base model, all Santa Fes are equipped with a hydraulically actuated all-wheel-drive system developed in partnership with Magna International.

This advanced system is designed to select the best torque distribution without the driver adjusting anything. In normal driving, the system distributes power only to the front wheels, helping to reduce fuel consumption.

The AWD system on the Santa Fe incorporates Active Cornering Control (ACC), integrated with the Vehicle Stability Management (VSM) system, which helps the vehicle handle acceleration in a corner. To improve traction and cornering performance, braking is applied to the inside rear wheel when accelerating through a turn.

To enhance the driving experience, the Santa Fe also comes with Hyundai’s Driver Selectable Steering Mode, controlled by a rocker on the steering wheel.

It gives the choice of Comfort, Normal and Sport with the first decreasing steering input by 10 per cent below Normal for greater parking ease in city driving. 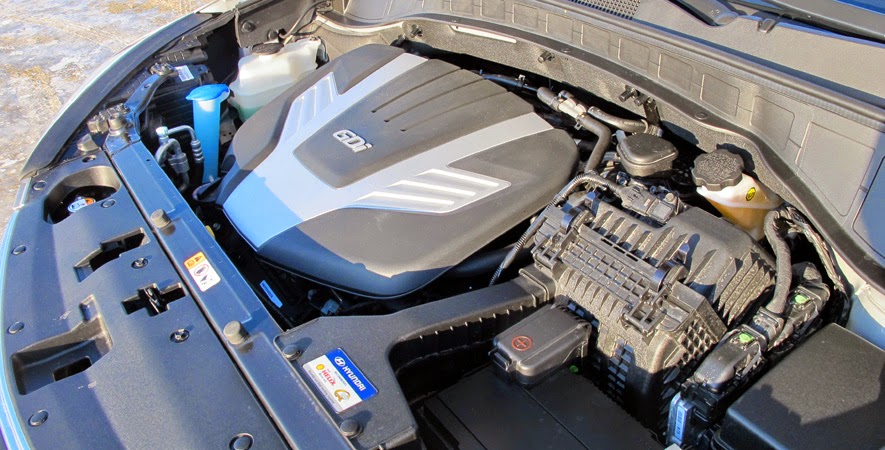 Normal is considered the best blend of driving conditions while Sport increases steering effort by 10 per cent for higher speed highway driving.

The Santa Fe comes with a battery of safety features that includes a Vehicle Stability Management (VSM) system that incorporates a Rollover Protection System and optimally manages the ESC (Electronic Stability Control) and the Motor-Driven Power Steering (MDPS) to help the driver maintain control of the vehicle in slippery conditions or during fast cornering.

If traction is lost and spin starts to develop, VSM can deliver up to eight Newton-meters of counter-steering effort to help keep it on the road. A Traction Control System (TCS) is also included.

All this was comforting to know as my co-driver and I drove through a brief but intense snowstorm just to the west of Malbaie, PQ, as part of a Hyundai program featuring the AWD capabilities of the Santa Fe and the new Genesis AWD sedan.

My Montreal-based co-driver knows these roads well and called the section of Highway 138 we drove on one of the most dangerous winter routes in the province, due to all the elevation changes because of the mountainous terrain.

With a set of top tier snow tires, our drive was almost leisurely, stopping off at several points to enjoy the view and visit the wonderful cheese stores. Yes I bought a bunch.

Another enjoyable part of the ride was listening to Phlash Phelps on SiriusXM 60s on 6 and all the crazy people he talks to which brings me to the third-generation audio/entertainment systems on the XL.

And then we come to the premium navigation system, which adds a 550-watt Infinity Logic 7 audio system with 10 speakers, including an eight-inch subwoofer. An XM satellite radio interface is integrated into each head unit, as is a Bluetooth hands-free phone system with voice recognition, address book download, and audio streaming. Both LCD screen-equipped systems integrate a rear-view camera.

One of the main reasons for buying an XL is about the cargo and passenger volume.

Despite making room for a third row seat, the XL wheelbase is only 100 mm longer than the Sport, yet the back seat is quite useable for short hauls.

Legroom in the second row is 50 mm longer and cargo goes up 240 litres compared to the five-seater. 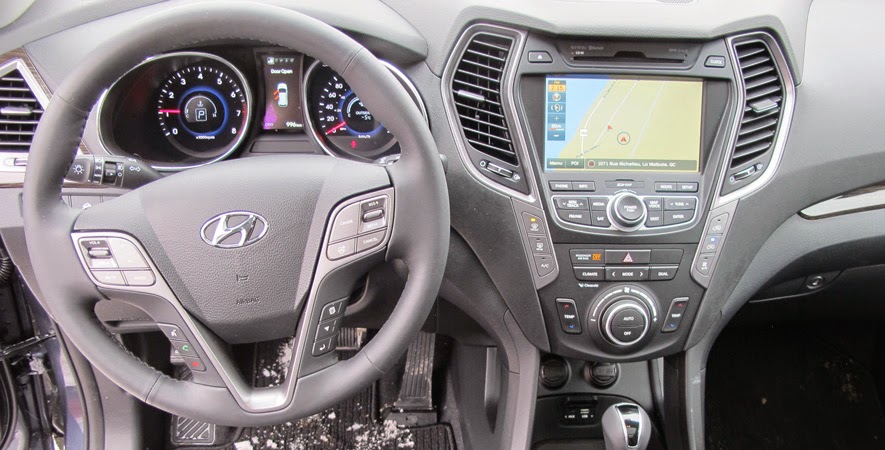 To visually make the larger XL stand out, the rear side window has a different shape and also features its own bodyside character lines from the B-pillar back. XL has a unique grille design, different alloy wheels, dual chrome asymmetrical exhaust outlets integrated into the rear bumper and a flush-mounted tow hitch design.

Prices start at $29,999 for the FWD base model up to $43,299 for the Limited AWD with Saddle Leather seating which several trim choices in between.

My drive in the Santa Fe XL certainly proved why there is such interest in AWD, proving that for many consumers, it is the way to go.