The 2015 Hyundai Elantra GT is one of the best examples of the current hatchback renaissance. Curmudgeonly critics like us have carped for years about America's hatchback aversion, but we'd better find a new routine because our fellow Americans have apparently seen the light. The affordable-hatchback segment is an embarrassment of riches these days, teeming with sexy specimens that boast all the latest technology, and with the arrival of the Elantra GT, the most appealing hatchback of all might be a Hyundai. 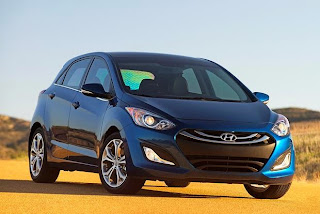 Derived from the Euro-market Hyundai i30 hatchback, the Elantra GT has a shorter wheelbase than the Elantra sedan, and it's tuned for sportier handling. Unlike the sedan's bare-bones starter model, the base Elantra GT comes with plenty of equipment, and plenty more is available via the two simple options packages. Plus, just look at the thing: The Elantra GT is an exceptionally attractive economy car. The hatchback is back, and as we've come to expect, Hyundai's at the front of the pack.

The Elantra GT carries over unchanged for the 2015 model year.

The front-wheel-drive Elantra GT features a 2.0-liter 4-cylinder engine that puts out 173 horsepower and 154 lb-ft of torque. The transmission choices are a 6-speed manual and a 6-speed automatic.

The 2015 Elantra GT receives an Environmental Protection Agency rating of 24 miles per gallon in the city and 34 mpg on the highway with the manual or 24 mpg city/33 mpg hwy with the automatic. That's not very impressive for a compact hatchback these days.

The 2015 Hyundai Elantra GT comes in one well-equipped trim level. 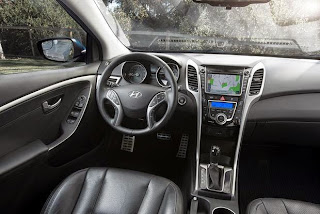 The Tech package ($3,950) requires the Style package and tacks on automatic headlamps, dual-zone automatic climate control, keyless entry with push-button starting, a navigation system with a 7-in touchscreen, a rearview camera and premium audio.

The Elantra GT received five stars out of five in government crash tests, including four stars for front impacts and five stars for side impacts.

The Elantra GT's front seats have been beefed up from regular Elantra duty with more aggressive side bolsters, a nice touch in an inexpensive compact. The available power driver's seat is exceptionally adjustable and supportive. The deeply hooded gauges feature Hyundai's standard-issue clear numerals and blue accents. Surprisingly, the Elantra GT's dashboard and control layout is less stylized than the Elantra sedan's. Compare the two side by side, and you'll find that the GT plays it safe with fewer complex curves and surfaces. Happily, most of the controls are no-nonsense and easily learned, while materials quality is satisfactory.

The Elantra GT's shorter wheelbase takes a small bite out of back-seat space, but there's still room for full-size adults there if the adults in front play nice. Trunk space is 23 cu ft., while folding down the rear seatbacks opens up a healthy 51 cu ft. 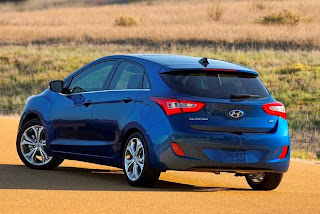 Under the hood, the 2.0-liter 4-cylinder delivers reasonably peppy performance in most situations. It feels strained at times, but it's a definite improvement over the old 1.8-liter unit that was discontinued after 2013. As for transmission, the precise 6-speed manual gives a more responsive feel, but at least the optional 6-speed automatic's downshifts are quicker than the norm these days. We do wish the 1.8-liter motor was still available, as we're sure there are folks who would rather have less power and an extra 3 mpg.

On the road, the Elantra GT handles crisply atop its sport-tuned suspension. The standard driver-adjustable steering effort is a first for this class, and it illustrates one of the main technological advantages of electric power steering: customizability. We'd still pick a Ford Focus or Mazda3 first for enthusiastic driving, but those models don't offer the Elantra GT's value. The Elantra sedan is already a nimble little car, and the shorter Elantra GT feels even more resourceful in tight spots. In part because of its relatively light weight, the Elantra GT can get a little out of sorts on rough roads, but we're generally impressed with the smoothness of its ride.

Other Cars to Consider

2015 Ford Focus -- You usually get what you pay for when it comes to economy cars, and the Focus is one of the most expensive. Sure enough, it drives almost like an entry-level luxury car, with uncommon refinement and athleticism for this class.

2015 Mazda3 -- With its smooth SkyActiv 2.0-liter engine (not to mention the spunky optional 2.5-liter version), the 3 has vaulted to the head of the class in fuel economy without losing Mazda's traditional performance edge.

2015 Volkswagen Golf -- The 2015 Golf feels amazingly solid at highway speeds, and it has top-notch interior quality. We like the new turbocharged 1.8-liter engine, too.

Used Audi A3 -- We're not talking about the current A3 sedan but rather the previous-generation hatchback, which can easily be found in gently used condition for Elantra GT money. You're going to want a warranty, though.