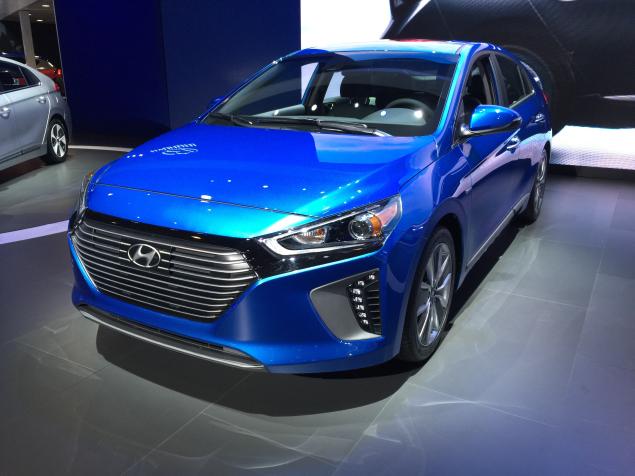 Hyundai has named its new alternative three-pronged powertrain strategy Ioniq and it is: full electric, hybrid and plug-in. It’s worth a trip to the auto show to see the interactive illustration of how the powertrains interchange. While trying to create mobility without restrictions for us consumers, they have put their engineers’ noses to the grindstone to combine efficiency and technology. (Don’t worry. Engineers love that.)

You immediately know which Ioniq is fully electric because the front end sports a panel that looks like an electric stove top with no burners—electric cars don’t need vents to cool the powertrain.

The Ioniq Hybrid and Ioniq Plug-in Hybrid both feature a new 1.6-liter, direct injected four-cylinder engine that delivers an estimated 104-horsepower and 109 lb.-ft. of torque.

The hybrid’s accompanying electric motor, powered by a lithium ion polymer battery, delivers about 43-horsepower with an estimated 125 lb.-ft maximum torque. The motor powers the car at low speeds and assists at higher vehicle speeds.

The plug-in provides an estimated all-electric range of about 25 miles and is powered by a 8.9 kWh lithium-ion polymer battery. The plug-in’s estimated 45 kW (60 horsepower) electric motor is combined with the 1.6-liter four-cylinder engine.

These polymer lithium-ion batteries are lighter and take up less space than cell type batteries. Hyundai has managed to tuck them under the rear seats, allowing for more cabin space. Charging up to 80-percent takes about 20 minutes using a fast charger system.

The Ioniq Electric has a range of 110 miles and is powered by a 28 kWh lithium-ion polymer batter. The electric motor has a estimated maximum output of 120-horsepower and 215-lb.-ft. of torque.

The interior has been laid out to achieve a clean look that is logical and clutter-free. Careful attention has also been paid to safety. Use of high strength steel, active safety features like blind spot detection, lane change assist, rear cross traffic alert, automatic braking, pedestrian detection and tire pressure monitoring are available or standard.

While it has arrived late to the alternative fuel party, Hyundai has been on a roll with new and improved vehicles like Sonata, Santa Fe, Elantra and Azera. They’ve even spun the Genesis nameplate into a separate luxury division. Will the Ioniq now take the fight to green machines like the Chevrolet Volt, Nissan Leaf and Toyota Prius? Time will tell, but you can get your first glimpse of what's to come here in New York.