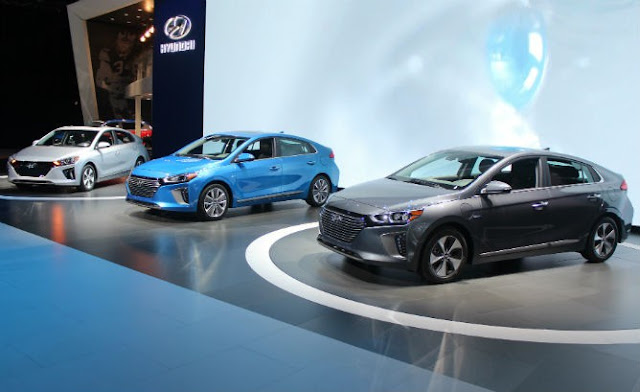 This week in New York Hyundai’s Ioniq was introduced to the U.S. market.

The car with choice of electrified powertrain will begin sales with the 2017 hybrid and battery electric versions in the fourth quarter of this year, and a 2018 plug-in hybrid version will follow a few months into next year.

Having been revealed on the world stage early this month in Geneva, Hyundai says the trio of green cars is a significant “milestone” in its play to take on Toyota, anyone else, and the growing green car market.

The Ioniq is also the world’s first dedicated electrified platform for which Hyundai can receive credit while also having saved billions in development costs that would have been incurred if it had separately developed three new cars. 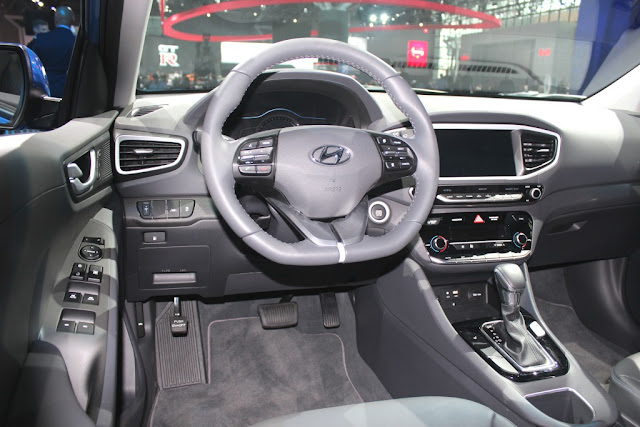 Shared by all three variants therefore are core specifications including significant use of aluminum and high strength steel to cut curb weight, seen as mission critical for maximum mpg.

These inaugural cars representing a new model line for Hyundai are intended to stay relevant through the next decade and are designed with expected creature comforts.

The Ioniq Hybrid was benchmarked against the Toyota Prius and is projected by Hyundai to be certified by the U.S. EPA at 57 or 58 mpg. This is not official, but assuming it becomes so, it will surpass the most-efficient 56 mpg Eco version of the 2016 rival from Japan, and take the top mpg spot among non-plug-in U.S. market cars.

The plug-in Ioniq builds on the Hybrid’s powertrain but adds an 8.9-kilowatt-hour lithium-ion polymer battery for emission-free driving.

Manager of Product Planning, John Shon says it will offer more than 25 miles EV range, but less than 30. In Europe it’s rated 32 miles (50 km). The new Prius Prime plug-in hybrid also launched yesterday has an 8.8-kwh battery and is estimated for 22 miles.

Toyota has said its new Prius line is more sporty than the previous model, touts an independent rear suspension, and wouldn’t you know, the Korean upstart also speaks of sportiness with independent rear suspension. Do you think Toyota knew who was going to come knocking on its back door when it redesigned the fourth-generation Prius for this year?

Other Hyundai specs mirroring Toyota’s best-selling hybrid is an engine with “unsurpassed thermal efficiency” of 40 percent – unsurpassed that is, except it equals the 40 percent Toyota also claims.

This engine built for hybrid applications is a direct-injected 1.6-liter Atkinson cycle serving up 104 horsepower, 109 pounds-feet of torque.

The electric motor in the hybrid versions provides an estimated 43 horsepower (32 kilowatts) with maximum torque of 125 pounds-feet.

In the regular Hybrid is a lithium-ion polymer battery with 1.56 kwh capacity.

Where Hyundai deviates from Toyota’s Prius and other hybrids which use a continuously variable transmission (CVT) however, is with a six-speed automatic manual, also known as a dual clutch transmission (DCT).

This unit promises superior highway mpg, while giving up some efficiency in city compared to the Toyota’s CVT, said Mike O’Brien, vice president of Corporate and Product Planning.

The Ioniq’s actual highway/city/combined numbers will be competitive with the Prius, but Hyundai’s choice of DCT follows its existing hybrids’ avoidance of CVTs – a move favored by traditionalists who like the sound, feel, and potential control of stepped gearing.

Hyundai’s Ioniq further mirrors Toyota however with its coefficient of drag – a “class leading” 0.24 helps the Ioniq slip through the wind and save fuel. Here too, it is class leading, but also happens to equal the Prius’ 0.24 cd, which itself matches that of the Tesla Model S.

Dimensionally the Korean and Japanese hybrid (see Prius hybrid spec sheet in gallery) are within inches or a fraction of an inch and ride on the same 106.3-inch wheelbase.

Hyundai figures maybe between October and November, or maybe by December the Hybrid will go on sale. It will be marketed and stocked in all 50 states.

The plug-in hybrid will follow and will be marketed just in the 11 and counting ZEV states following California rules, but Hyundai dealers in all states may choose if they wish to stock and/or special order the PHEV for buyers who want it.

Nearly everything structural and design-wise about the Ioniq Hybrid and Plug-in Hybrids is true also of the battery electric Ioniq except, of course, it burns no gas.

As intended from its inception, it is a case of delete engine; insert all-electric powertrain.

Centered around a 28-kilowatt-hour lithium-ion polymer battery mostly under the rear seats, the EV pending EPA certification is expected to deliver 110 miles range.

Its electric motor is estimated at 120 horsepower (88 kw) and 215 pounds-feet of torque. As is customary, a single-speed reduction gear transmission is employed.

Hyundai is also touting a very high 125 MPGe estimated rating. If this is so, it will edge out the 124 MPGe BMW i3.

The Ioniq trio appears to be the closest rendition yet to a jack-of-all (electrified) trades, and master of some – not “none” – as it does promise efficiency and performance in all three versions that could lead to a respectable value proposition.

As noted above, the Ioniq Hybrid is predicted to beat the 2016 Prius in mpg, if only by a little bit, and with variances between city efficiency and highway.

The Plug-In Hybrid likewise beats the 2017 Prius Prime with more than 25-plus miles range versus 22 estimated – but again, neither Toyota nor Hyundai have announced EPA-certified numbers yet.

In hybrid mode, the Hyundai also stands to edge out the Prius Prime, though this is to be determined, as the Ioniq Plug-in Hybrid’s MPG is expected to be slightly lower than the Ioniq Hybrid due additional curb weight.

Otherwise, its e-range will beat the 19-mile Ford C-Max and Fusion Energis, should fare well against the 27-mile Hyundai Sonata and Kia Optima PHEVs, but other plug-in hybrids may eventually surpass its e-range, and the 53-mile 2016/2017 Chevy Volt already does.

As for the Ioniq Electric, some EV fans – already jaded by future products like the 2017 Chevy Bolt, Tesla Model 3, and next-generation Nissan Leaf – have been less than kind in assessing Hyundai’s EV with just three miles more range than the new/old 2016 Leaf.

Hyundai was not caught sleeping at the wheel, however, and offered some views on how it sees things working out.

“The main thing that we saw for electric vehicles is, you know, 200 miles range like the Chevrolet Bolt is planning,” began Shon when asked about the Bolt. “What are the real advantages to that other than the fact that you’ll go 2-3 days without charging?” he posed rhetorically.

“We already have all the data for electric vehicles, plug in hybrid owners – 90 percent plug in over night and at home,” he said. “So if they are buying it for commuting purposes, 200 mile range, what are you really gaining from that?”

This is not to say Hyundai declares 200 miles irrelevant or superfluous, but speaks mainly to certain buyers who are fine with low-100s while saving on weight, potential battery cost, and potential packaging complexity, as the case may be.

At the end of the day, Hyundai is fully aware the new benchmark is about to leave 110 mile EVs and O’Brien said what EV fans have suggested – it may price the car to make it still worthwhile.

“Remember one key point is manufacturers don’t set the price, the market does. If you look at a Fiat 500 Electric – now below $100 month payment – it wasn’t Chrysler’s wish to price it below $100 a month. Right? It was the market,” said O’Brien of a lease payment for that limited-market car. “So they had to adjust. So all manufacturers end up – in the final analysis they’re going to price to what the market will absorb. 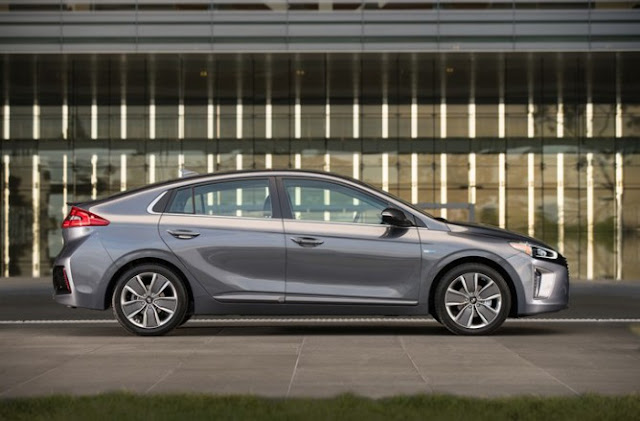 “We are fully cognizant to the fact that people will compare range, and the vehicle size, and other attributes, and we are going to have to price to that.”

Major manufacturer EVs have only been on the market since the 2011 model year, and how this will all shake out remains to be seen, but O’Brien suggested varying performers will settle similar to how conventional vehicles have.

Today there are internal combustion vehicles ranging from economical four cylinders, he said, to V8s and buyers have to choose how much engine they want.

A similar corollary might be seen with EV range and inexpensive but effective 110 mile or so EVs may work for some while others will want 200, 225, 300 and whatever else may come along.
Not All Eggs In One Basket

The Ioniq line itself was intended to try to be closer to a normal alternative that happened to be green. The drive experience will not be weird, but rather O’Brien said the car is not much different than a sharply tuned Elantra.

For all the talk of “sportiness” between Toyota and Hyundai, the qualifier is they are speaking of hybrids not normally associated with that trait at all.

“Is it a Porsche? No,” said O’Brien of how the Ioniq will impress drivers, “but people will get into it and not feel lke they are giving up anything.”