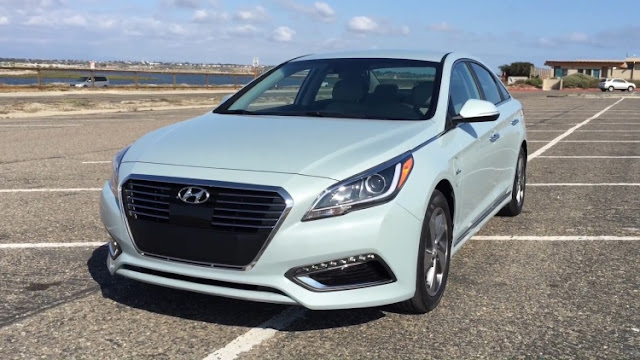 The maturation of the Sonata sedan has been remarkable. Initially a cobbled together four-door using engines from Mitsubishi and pieces from smaller Hyundai cars, the Korean product was an entry-level midsize offering based on price.

Today, the newest Sonata is among the five top-selling midsize sedans in America. The very popular Hyundai comes in five trim levels, with four different powertrains, including both hybrid and plug-in hybrid models that are honored on Ward’s Ten Best Engines list — the first hybrid-powered vehicles to earn that distinction.

In 2011, Hyundai brought a radically redesigned Sonata into production, the second generation of the car to come from the Montgomery, Ala., assembly plant. American buyers gravitated to the new look, an expressive, radical departure from previously staid designs. Unfortunately, buyers back in Korea did not embrace the new look quite as readily and Hyundai elected to tone down front and rear fascias with a mild mid-cycle makeover last year. Sales have stabilized — more a factor of the assembly plant’s production limitations than customer desires, as the latest Sonata packs a lot of punch in a well-stocked package.

The Sonata Plug-in Hybrid features a 2.0-liter Atkinson-cycle four-cylinder engine married to a 50-kw/67-hp permanent magnet electric motor powered by a lithium-ion battery pack. Running through a conventional six-speed automatic transmission, the Plug-in earns a 99-MPGe electric operation range as well as a 40-mpg combined city/highway mileage rating. Capable of covering up to 27 miles purely on electric-only power, the Sonata Plug-in can also travel up to 600 miles on one charge/tank of fuel — the best in class range.

Charging the Sonata is easy, and just as simple as other plug-ins. A heavy-duty cord attaches to a socket in the front fender and a charging station/outlet in your garage, at work, or outside at home. Snow and rain did not deter the charging effort while the Sonata visited, while we also learned that the cord cannot be disconnected if the car is locked. Apparently there are a lot of power cord thefts in more urban areas? 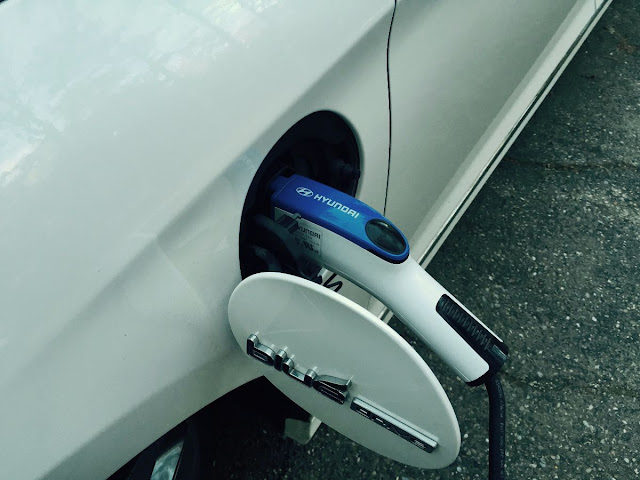 Charge time is less than three hours for 240-volt power sources, slightly less than nine hours for regular 110-volt charging, essentially overnight for the regular commuter.
During our usage, the Sonata revealed a high of 60-mpg on the extensive info panel before all-electric power was exhausted and the gasoline engine became my primary power source. Even with the initial battery juice consumed, the Sonata Plug-in still functions as a hybrid vehicle, with regenerative braking and battery power held in reserve for passing and peak power requests, so there are still some electric driving assists. Peak efficiency for a 284-mile trip came to 42.4 mpg — combined electric and gas use, (easily beating the EPA estimate) while the Sonata still had more than half a tank of gasoline left. Like Chevy’s Volt, range anxiety is nonexistent in this electric hybrid.

Operation is quiet in electric mode, just some whirring of the electric motor. Throttle response is smooth. Low-rolling resistant 17-inch tires did create some worn pavement noise, but otherwise, the Sonata is a solemn road partner.

This is where buyers will have to weigh the pros and cons to spending the extra money for the Sonata’s Plug-in model. The Plug-in asks little in the realm of compromises; the Sonata’s limousine-like rear seat proportions remain, the trunk still has ample room for cargo and the car’s front drive chassis delivers ride and compliance composure that match the rest of the midsize sedan segment. Stocked with the usual plethora of Hyundai features, creating lofty price/value quotients, the Sonata Plug-in’s sticker price may give pause despite a hefty $4,919 potential tax rebate.

The Sonata Plug-in starts at $34,600 ($39,610 as shown here in top Limited trim). That is a big retail leap for a modest gain in overall efficiency, even if you qualify for the tax rebate. Given the state of today’s fuel prices, it is reasonable to understand that hybrid and plug-in hybrid vehicles are facing considerable market resistance. 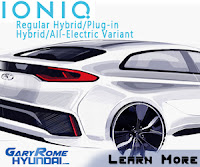 But we know the current conditions won’t last — everything oil-related runs in cycles, some better than others. Hyundai is banking on that reality, as well as ever-increasing fuel economy standards, and has also created the Ioniq, a compact hybrid car meant to challenge Toyota’s Prius. The Ioniq looks more like a conventional car, apparently gets about the same fuel economy as the Prius while delivering more power, and we know that it will be priced less than the Prius — that is just how Hyundai rolls. Look for the Ioniq at Hyundai dealers this fall.

Hyundai also builds the Tucson Fuel Cell Crossover, but that little trucklet is only available, currently, in very limited markets — like California — as there are very few re-fueling sites, a condition that doesn’t look like it will change in the short term.

Two other pieces of Hyundai news are worth noting here as the whole brand reflects the maturity evident in this Sonata. Going forward, all of Hyundai’s luxury models — Genesis and Equus — will be sold under the single Genesis label and only at conventional Hyundai stores as the automaker eschews the expense of creating a stand-alone luxury retailer. Makes perfect sense as both Acura and Infiniti are having difficulty separating consumer recognition as well as the products they sell from the cars and crossover upon which they are based (from Honda and Nissan respectively).

A great interior on the Sonata, complemented by extended driving range and urban electric commuting, give the Hyundai sedan an edge over some rivals. Low gasoline pricing may make market success a longer-term proposition however.

Other powertrains: a 2.0-liter, 245-hp turbo-four is available on Sport and Limited trim models while the 1.6-liter 178-hp turbo-four used in the new Tucson is also available.

The Sonata Plug-in hybrid is assembled in Korea.