Hyundai Motor Company has denied reports in the South Korean media claiming that it has cancelled plans to add diesel engines to its Genesis sedan range. The company in fact now says it will add diesel versions of two models in 2017.

The G80, which is the new name for the former Hyundai/Genesis Sedan, will be one of the first vehicles to gain the option of diesel power in the home market. The other car will be the EQ900, which is sold in other markets as the G90. 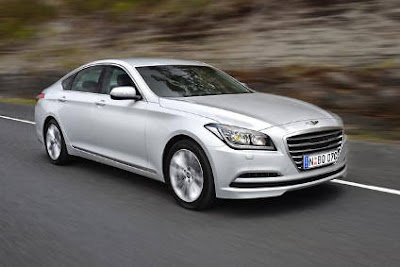 The addition of compression-ignition engines comes despite a backlash against diesel vehicles in South Korea, following the Volkswagen scandal and resultant bad publicity over the danger of particulates.
"We are going to launch diesel models of Genesis EQ900 and G80 as planned," a senior official of Hyundai Motor told The Korea Herald.

A company spokeswoman for Hyundai told just-auto that for the moment, there are no official plans to add any diesel engines to the European market Hyundai Genesis sedan. Hyundai has thus far restricted the launch of its luxury brand to South Korea, North America, China and the Middle East, initially at least. Europe, Australia, New Zealand and other markets should, however, follow from 2017 as the model range is expanded.
In related news, owners of certain gasoline-powered Volkswagen vehicles are now seeking criminal charges against the German firm in South Korea.

"We are gathering customers to file class-action suits as well as criminal charges against the automaker. (For criminal charges), the system manipulation may cause an engine breakdown, which may lead to physical damages to users," Ha Jong-sun, a lawyer who represents those customers, told The Korea Herald.

Earlier in June, 956 Volkswagens and Audis were confiscated by the prosecutor. It is alleged that 606 of these cars either failed to obtain certification from the Ministry of Environment or exceeded the limit for harmful gas emissions. The Seoul prosecutor's office has also found that Audi Volkswagen Korea faked 48 fuel economy averages submitted to the Korea Energy Agency between 2012 and 2014.