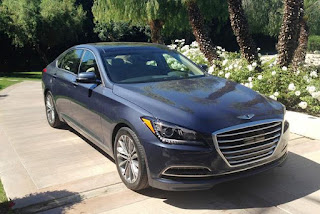 When an old friend announced that he'd be getting married in La Quinta, California, this spring, my thoughts naturally turned to what car I'd be driving out to the desert from Los Angeles. Having thoroughly enjoyed the 2015 Hyundai Genesis 5.0 in a previous test, I decided to set my sights on the cheaper, V6-powered 2015 Hyundai Genesis 3.8, which I had only driven briefly. The scheduling worked out, and the Genesis did yeoman's work throughout the 4-day event, ferrying four to five adults around in exceptional comfort and even schlepping a trunk's worth of libations from Costco to the wedding site. Here are the three most memorable impressions the high-class Hyundai left during its visit.

The V6 Is Probably Enough

In my Genesis 5.0 review, I concluded that "the Genesis feels truly special with the big V8 rumbling contentedly under the hood, and you don't get that same feeling with the V6." Now that I've spent an equal amount of time with the V6, I want to amend my position slightly. Don't get me wrong; the quoted statement is still true. The V8 has 420 horsepower to the V6's 311, and that's a difference you can definitely feel on the road, especially with a full load of passengers or cargo. But the V6 is pretty forceful in its own right, and it sounds sophisticated too, even if it can't match the V8's mellow baritone. Although I love that Hyundai builds its own V8 with 400-plus hp, I bet most test drivers will find the V6 more than adequate for their needs. 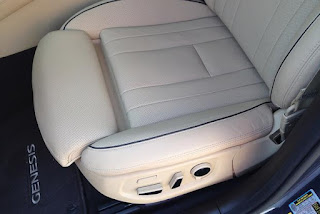 I was a bit disappointed in the Genesis 3.8's real-world fuel economy, though. I went through one full tank of gas during my loan, and I'd say it was about 40 percent city driving and 60 percent highway. Based on the Environmental Protection Agency's fuel economy estimates of 18 miles per gallon in the city and 29 mpg on the highway for the V6, I'd expect around 24 to 25 mpg for that kind of mix. Instead, the math worked out to about 21 mpg. To be fair, I had a lot of extra weight in the car on a regular basis, so that extra strain could have been the culprit. But based on this 1-tank sample, my jury's still out. In real-world driving, the easy-going, torque-rich V8 might come closer to the V6's efficiency than you'd think.

Because of its remarkably reasonable pricing, which is $38,950 for the entry-level 3.8 and was $49,950 for my fully loaded Ultimate Package test car, the Genesis is often compared to midsize luxury sedans such as the BMW 5 Series. But if you look at the Hyundai's exterior dimensions, it actually slots in between the 5 Series and the full-size 7 Series. And in terms of how it feels inside, the Genesis is a proper executive car all the way. Road noise is barely noticeable; you can listen to talk radio at highway speeds without ever straining to hear a word. Rear-seat accommodations are generous even for 6-footers, with wonderfully shaped seats that my passengers were still praising after a few hours on the road. The Genesis feels big too, though not in a bad way; you just get the sense that there's a whole lot of car underneath and around you, and no midsize sedan can match that. Plain and simple, this Hyundai has the character of a car the boss would drive, never mind its middle-manager pricing.

The Driving Feel Is First-Rate 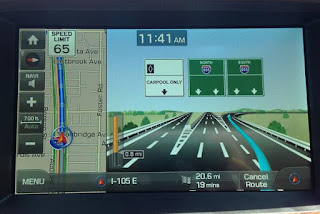 When it comes to my personal taste in cars, I put a premium on how I feel in the driver's seat. One factor is the driving position itself: Do the controls fall readily to hand? Is outward visibility a strength? In the Genesis, the answers are "yes" and "yes," but that's not all; I also like how everything seems to wrap around me, almost like I'm driving a luxury coupe. I'd look forward to driving this car every day for that reason alone.

Then there's the way it tackles the tarmac, and here again the Genesis proves its worth. I've never shied away from calling out Hyundais on their dynamic shortcomings, but the thing about the Genesis is that it doesn't really have any. The ride is buttery-smooth, as you'd expect, but the car also stays pretty flat in corners, and the steering is surprisingly precise. The engaging driving position creates high expectations for the on-road experience, and as it turns out, that's a check that the Genesis has no trouble cashing.

The 2015 Genesis 3.8 hits all the notes that luxury-sedan shoppers are looking for, and I'd be remiss not to mention the styling, too. I think this is the best-looking Hyundai ever, with a distinctively upscale shape that's not nearly as derivative as the company's previous designs. It's the kind of car you're proud to put in your driveway. As a power junkie, I'd still target the V8 myself, but you're certainly not settling if you choose the 2015 Hyundai Genesis 3.8.