HARTFORD — Quinn Ostergren chose green for her first handprint, to match her dress. Then she switched to blue, when she snuck up behind Connecticut Children's Medical Center oncologist Dr. Eileen Gillan and landed a bright, child-size print on the back of Gillan's white coat.

During a signature handprint ceremony, pediatric cancer patients were allowed to paint their hands and make a handprint on a white Hyundai Santa Fe Sport, including Kiley Sullivan, 6, of West Hartford. Sullivan was diagnosed with rhabdomyosarcoma in April 2014 and is in remission.  (Cloe Poisson / Hartford Courant) 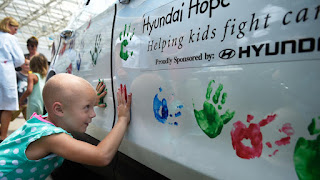 Including Tuesday's award, Hyundai Hope On Wheels has donated $650,000 to CCMC since 2006 and just over $100 million to pediatric cancer research funding since 1998.

This award, planned for infrastructure to build a comprehensive neuro-oncology program, will help the program continue to provide "state of the art treatment," Gillan said.

"We want to treat every patient as if they were our own child," she added.

Ostergren, now 5, has firsthand experience with this personalized treatment. She was first diagnosed with a brain tumor in August 2012, and the cancer recurred a year later. She finished 18 months of chemotherapy last fall.

"This is not a journey anyone wants to go through, but we're so happy we could do it here," Alyssa Ostergren, Quinn's mother, said. "They're not just doctors, they're our family."