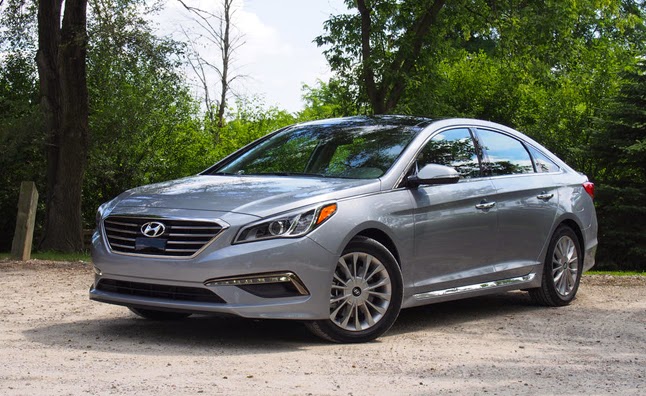 It’s hard to envy midsize-sedan shoppers. They’ve got one of the toughest jobs around. Brand-agnostic buyers are literally overwhelmed with excellent choices; their cups runneth over. Automakers are building the best family cars they’ve ever offered. How’s the typical consumer supposed to choose?

FAST FACTS
Engine: The 2.4 Limited is powered by a four-cylinder engine with 185 hp and 178 lb-ft of torque.

Is an Accord appreciably better than a Camry? Is Chrysler’s all-new 200 a smarter choice than the Ford Fusion or Volkswagen Passat? Questions like these are tough to answer because every family sedan is so gosh-darn competitive these days.

Hyundai is giving customers yet another excellent option. The South Korean brand is fielding its all-new seventh-generation Sonata, which delivers advanced features, more refinement and a better driving experience than it ever did before.
Outside …

But perhaps one area where this car took a step backwards is design. The previous-generation featured dramatic exterior styling with swooping surfaces, sharply angled headlamps and a tapering roofline.

Wearing the company’s “Fluidic Sculpture 2.0” design theme the 2015 model looks considerably more buttoned down. If the previous generation wore a flowery Hawaiian shirt and worked at Trader Joe’s the latest Sonata is more like a member of the Geek Squad with creased slacks and a necktie.

Overall the car looks more grown up and its styling will probably age a lot better than the sheet metal its forebear was dressed in, but I kind of wish it didn’t lose all of its youthful charm.
… Inside …

It’s the same story inside; the car has matured, though fortunately it hasn’t gone gray. Its dashboard is flatter and comprised of simpler forms. Where the previous model had curving shapes and busy angles this one is cleaner and more elegant, if a bit dull.
Hyundai gets points for its attention to detail. The cabin is extremely well built, with no noticeable fit-and-finish flaws. Everything was properly screwed together and functioned as it was supposed to; even the materials quality was surprisingly excellent with soft, low-gloss plastics and creamy leather, though there was one exception.

The simulated wood trim found in certain models is cheesier than the Wisconsin State Fair. From a distance (three miles) this plastic “timber” is ok, but when you get closer (less than 10 feet) it starts to look extremely low-rent. Prominent dots form the “wood’s” grain, though they make it look like a newspaper photo that’s been enlarged about 10 times. 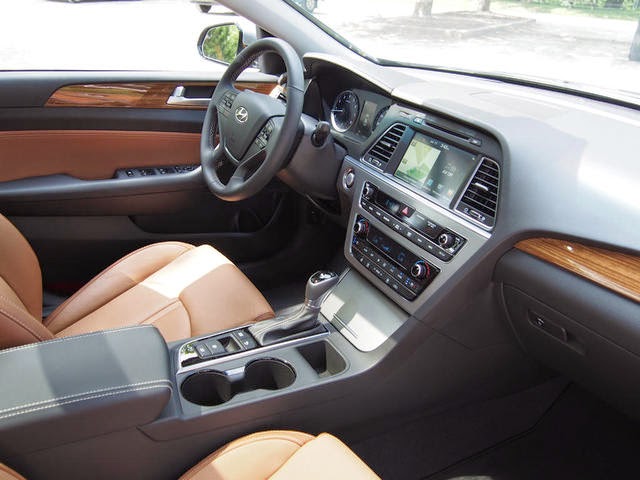 The passenger compartment is nice and wide, perfect for generously portioned American customers. It’s also quite spacious in steerage. Back-seat passengers will have little to complain about in the 2015 Sonata, unless of course they want swiveling, conversion van-style buckets, a frozen-drinks dispenser or space for a bluegrass jug band.

As for storage, this car’s trunk is quite commodious; it’s able to handle a maximum of 16.3 cubic feet of junk. That’s more than the Toyota Camry, Nissan Altima, Honda Accord or Ford Fusion, if only slightly.

The Sonata also brandishes and available feature called Smart Trunk. It’s a hands-free way of accessing the car’s aft-most cargo hold. Simply stand at the rear of the vehicle for three seconds with the key fob in your pocket and the trunk will automatically open. It’s like Ford’s foot-activated liftgate system but does not require you to gesticulate one or more of your lower extremities.
… And Upside Down

Thanks to its generous trunk and spacious passenger cabin the 2015 Hyundai Sonata is actually classified as a large car by the U.S. EPA. Its total interior volume is 122.4 cubic feet, which makes it bigger than its core competitors; it’s even more capacious than the Texas-sized Honda Accord.

Providing a solid foundation on which to build, this car’s underlying architecture is comprised of more than 50 percent high-strength steel. This makes the structure 41 percent stiffer and gives it 35 percent improved bending strength; fancy numbers that mean the new Sonata is really sturdy. 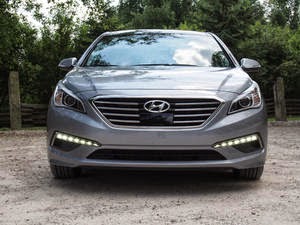 Customers have a generous menu of powertrains to choose from with the new Sonata. The smallest engine is a 1.6-liter turbocharged four-cylinder found in the Eco model. Estimated output figures check out at 177 hp and 195 lb-ft of torque. This unit is matched exclusively to a seven-speed dual-clutch automatic transmission for maximum efficiency.

This drivetrain configuration is expected to return 28 MPG in the city and up to 38 on the interstate. More importantly its combined rating should be 32 MPG.

The 2015 Sonata’s most powerful propulsion option is a 2.0-liter turbo. This little dynamo puts out 245 hp with 260 lb-ft of low-end torque, a 29-pony reduction compared to the same engine in today’s car. That extra oomph was traded for more low-end twist and better drivability.

Paired with a standard six-speed automatic transmission this drivetrain results in a combined consumption score of 26 miles per gallon, a figure that’s derived from its city rating of 23 and its highway score of 32. 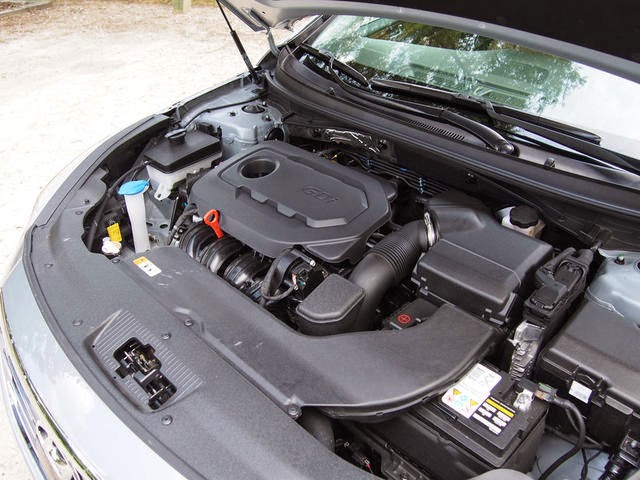 Finally, there’s the engine that’s stuck in the middle, a 2.4-liter naturally aspirated four-cylinder, the unit I’m focused on with this review. Like its force-fed little brother this powerplant has received some modest attention. Engineers worked to improve cylinder-head cooling and redesigned the camshaft phasers for quicker response.

Busting out our trusty AutoGuide.com abacus, this engine tallies up 185 hp and 178 lb-ft of torque. That’s a five-horse drop, but a sacrifice that was, again, made to boost responsiveness. Fuel economy measures up to 25 MPG city, 37 highway and 29 combined, though Sport- and Limited-trim cars are slightly less efficient. They drop to 24, 35, 28.
2015-Hyundai-Sonata-2.4-Limited-10.JPG
The Drive

One thing that’s immediately obvious about the new Sonata 2.4 Limited is just how competent it is. No, it’s not a sports car nor is it something you’d want to drag race on weekends, but it is really well done.

The ride strikes a nice balance between firm and flaccid; you get a good sense of what’s going on down below yet there are no harsh impacts or jiggling sensations. Beyond this the tiller is appropriately weighted with nice on-center feel … finally.

Engineers revised the car’s electrically boosted power-steering system by beefing some parts up, switching to a 32-bit ECU and reinforcing the rack bar. Models powered by the turbocharged engine feature a dual-pinion setup for even greater high-speed stability and improved responsiveness.

Power from the smooth-running 2.4-liter four-cylinder engine is more than adequate for family duty. Its 185-horse stable is plenty capable of getting the vehicle up to speed, though drivers will probably crave a little extra gusto if the car is loaded with passengers and parcels. The six-speed automatic is a treat as well because of its smooth, responsive performance. From a driving perspective it’s everything you could want in a self-shifting gearbox.

On the other hand the car’s available 2.0-liter turbo is downright muscular. Like a nougat-filled candy bar this engine is loaded with torquy goodness. It’s extremely potent at low RPM, delivering diesel-like thrust just past idle. Of course the trade-off for this is a less-than-inspiring top-end. Sure, it pulls to redline but the thrust tapers off noticeably at higher engine speeds.
Pricing and Features

Like all Hyundais the 2015 Sonata comes standard with a host of attractive features. Even drivers that opt for the cheapest SE model get air conditioning, a cabin filter, cruise control, power windows and locks as well as various connectivity ports for the audio system. Beyond the basics, a raft of high-end options are also on offer. You can get smart cruise control, heated and ventilated front buckets, a navigation system with an 8-inch display and much more. Is this a luxury car or a family sedan? It’s getting harder and harder to tell these days.

You can drive off the lot in an entry-level SE-trim Sonata for just $21,960 including $810 for destination and delivery fees. That’s 300 bucks less that an equivalent 2014.

From there you can step up to a Sport model, which runs from the mid 23s to about 27 grand. Next comes Limited and finally Sport 2.0T. The priciest model should top out around $34,335 with all the proverbial chimes and claxons. 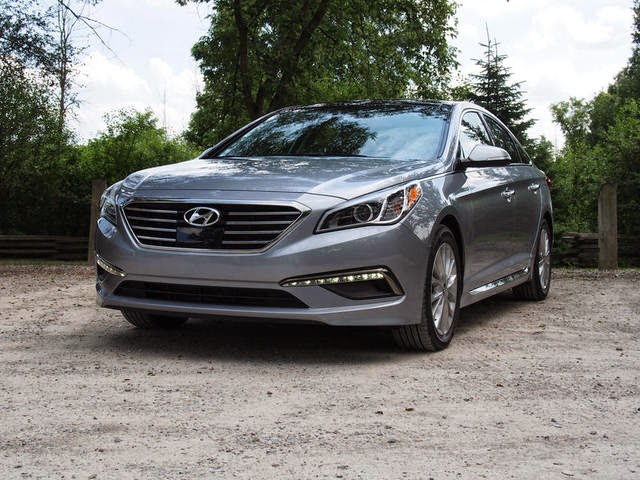 And in traditional Hyundai fashion the car is backed by an unbeatable warranty. Owners are shielded by a five-year/60,000 fully transferrable new-vehicle guarantee as well as 10-year/100,000-mile powertrain protection.
The Verdict

Aside from its exterior styling, which has taken a step back as well as its detuned engines, the 2015 Hyundai Sonata is a competitive entry in the midsize segment. It’s a car that’s easy to recommend and hard to ignore. It drives about as well as any of its rivals, its interior is comfortable and spacious plus the whole package is a compelling value. Maybe shopping for a family four-door isn’t that hard after all.

Source
Posted by Hyundai Dealer at 8:56 AM