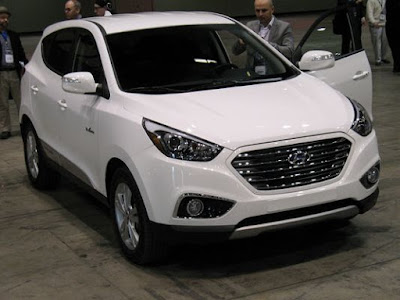 Introduced last year, the Hyundai Tucson Fuel Cell vehicle debuted in the Southern California marketplace. For the first time, retail consumers will be able to put a mass-produced, federally certified hydrogen fuel cell vehicle in their driveways. Availability of the Tucson Fuel Cell will expand to other regions of the country consistent with the accelerating deployment of hydrogen refueling stations.

The prime mover for this very special Hyundai crossover is a combination of an electric motor, high-density battery pack and hydrogen fuel cell which emits nothing but water vapor.

The Tucson Fuel Cell can only be leased from the manufacturer, but the lease includes unlimited free hydrogen refueling and At Your Service Valet Maintenance at no extra cost. Should a Tucson Fuel Cell require any service, a Hyundai dealer will pick up the vehicle and provide a loaner, then return their vehicle after service to their home or business at no charge.

The Tucson Fuel Cell represents the next generation of electric vehicles – those that create their own electricity, on-board, from hydrogen. According to UCI's Advanced Power and Energy Program's 2013 study, the hydrogen fuel cell provides lower total well-to-wheel emissions than a battery electric vehicle. For the Tucson Fuel Cell driver, this social benefit is achieved with greater utility, versatility and without compromises.

The benefits of hydrogen are well known -- required supplies for the U.S. market can be produced domestically and its supply is virtually unlimited. It can be produced by varied means – including renewable sources such as biogas. In fact, Hyundai's Fuel Cell prototypes have relied on hydrogen generated at the Orange County Sanitation District near its Fountain Valley headquarters, where methane from sewage is turned into hydrogen. Hydrogen can even be sourced directly from water, using electrolysis to split hydrogen molecules with electricity from renewable sources such as wind and solar.

All vehicle measurements are in inches