The 2015 Hyundai Tucson isn't your typical jack-of-all-trades compact crossover. Hyundai also has a larger affordable crossover, the Santa Fe Sport, so the Tucson doesn't have to be everything to everyone. Instead, the 2-row Tucson trades on its tidy dimensions, which give it an unusually nimble, sporty feel. It's a crossover for folks who aren't ready for a hulking family vehicle just yet. 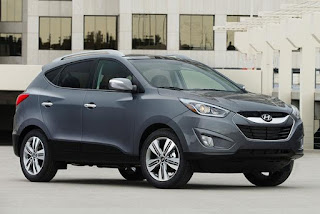 Don't get us wrong, the Tucson still provides enough room for four full-sized passengers to ride in comfort. And while cargo capacity is unimpressive by segment standards, there's a useful amount of space when you fold down the rear seatbacks. Our only consistent complaint concerns what's under the hood: The base 2.0-liter engine fails to provide confident passing power, even with a recent overhaul that added direct fuel injection. The 2.4-liter engine is the pick of the litter, though fuel economy isn't stellar either way.

Overall, the Tucson remains one of the more pleasant crossovers at this price. It's up to date in most respects, and its manageable size makes it an enticing alternative to larger rivals.

The Tucson adds a Popular Equipment package for the GLS model that includes a touchscreen interface and a power driver's seat.

The 2015 Hyundai Tucson is offered in three trim levels: GLS, SE and Limited. 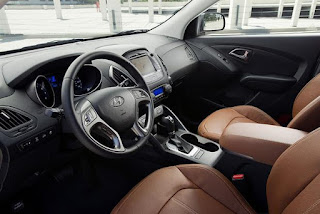 Limited options include LED taillights, a panoramic sunroof, a 7-speaker premium sound system, HD Radio and a revised navigation system with a 7-in touchscreen. The GLS is eligible for a Popular Equipment package that adds the automatic headlights, a rearview camera, a power driver's seat, cloth and leatherette upholstery, and a 4.3-in touchscreen.

In government crash-testing, the Tucson garnered four stars out of five overall, including four stars for front impacts and five stars for side impacts. The independent Insurance Institute for Highway Safety awarded the Tucson its highest rating of Good in every category except the small-overlap front test, where it earned a Poor rating. 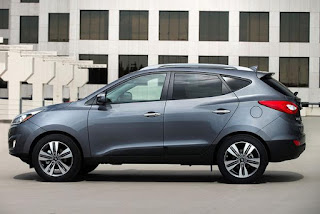 It's refreshing to hop into a Tucson and remember how fun a genuinely compact crossover can be. With its 103.9-in wheelbase and 173.2-in overall length, the Tucson is actually smaller than the compact Elantra sedan, so it's no wonder that this thing drives like a hatchback on its tiptoes. The Tucson does ride rather firmly, but we're not offended. Impact harshness rarely registers, and the payoff is that this little crossover can actually dance in the curves. Road noise can be an issue, however. There are definitely quieter crossovers in this class.

Other Cars to Consider

2015 Kia Sportage -- Mechanically similar to the Tucson, the Sportage boasts more angular styling and the availability of an awesome turbocharged 2.0-liter inline 4-cylinder.

2016 Mazda CX-5 -- Mazda's new compact crossover goes toe-to-toe with the Tucson across the board, and it's even more fun to drive.

2015 Volkswagen Tiguan -- If you're considering the Tucson Limited, know that the same money could get you into a decently equipped Tiguan, and the VW is both faster and generally nicer.

Used Hyundai Santa Fe Sport -- The 1-size-up Santa Fe Sport offers more space and turbocharged power, and Hyundai's certified pre-owned program can get you into a low-mileage example for the price of a new Tucson.