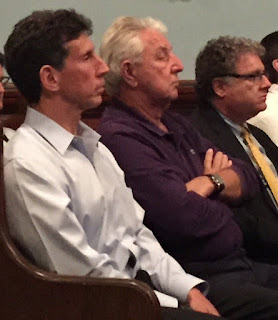 
The committee also will discuss developing an ordinance that would give the Fire Department a more organized way to track whether restaurant kitchen exhaust systems are being cleaned properly to reduce chances of grease fires.

The Ordinance Committee meeting is at 6:30 p.m. at City Hall.

Pursuit of the special permits are followup steps after the City Council voted 14-0 May 19 to grant Rome a zone change so he can build the dealership on nearly 19 acres across from Autumn and Lynch drives. The site is up the road from the Holyoke Mall at Ingleside.

One special permit is to allow for a motor vehicle repair garage on nearly 19 acres Rome is buying on Whiting Farms Road across from Autumn and Lynch drives. The other is for new and used cars and trucks and marine and recreational vehicles.

Rome is buying the property from the Holyoke Gas and Electric Department for $2,050,000.
His project will provide 50 new full-time jobs, some part-time jobs, thousands of dollars a years in property tax revenue and an increase in employee payroll to more than $7 million from the current $4.6 million, he said.

His current dealership at 1000 Main St. here will stay open, he said.

The proposal would require that companies that are licensed to clean the so-called hood and exhaust areas in restaurants and other commercial kitchens first get a permit from the Fire Department. The permits would cost $25.

The permits would help the department monitor where and when such systems around the city are scheduled for cleanings. The permit would require that cleaning companies submit photos of the hood and exhaust systems before and after the cleanings. The Fire Department would use the list of permits to inspect and ensure the cleaning was thorough, Michael Boucher, Holyoke Fire Department fire inspector, told The Republican and MassLive.com last week.

Currently, with 236 establishments with commercial kitchens here, no organized schedule exists to make sure kitchens' hoods, ducts, filters and fans are free of grease and combustible contaminants, he said.

Also, he said, restaurants and other businesses here with commercial kitchens such as daycare facilities have been getting shortchanged by companies they hire to clean such systems. In every case in which Boucher has inspected kitchens after companies supposedly did cleanings, the hood and exhaust systems clearly had weeks or months of grease accumulation remaining, he said.

Sometimes the outer areas and parts most visible are cleaned but the harder-to-see areas farther inside a duct might have dangerous contaminant build-up, he said.

In such cases, the Fire Department is authorized to shut down a restaurant if public safety is at risk. The department can hit the cleaning company with fines of $100, $500 and $1,000 each time they are ordered to redo the cleaning and the job remains insufficient, he said.