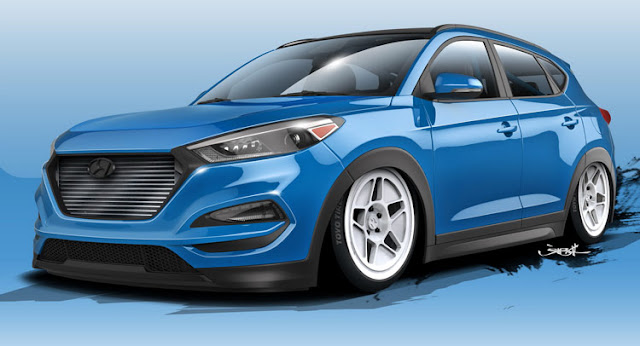 We've barely finished reporting on the Frankfurt Auto Show and we're already moving on to the next big event of the season, the 2015 SEMA Show. Hyundai is one of the first brand's to communicate their plans for this year's tuning show in Las Vegas with the 2016 Tucson “Brute Ute” developed in partnership with Bisimoto.

Teased here in a digital render, the "Brute Ute" does not validate the term 'ute', which was originally coined in Australia and New Zealand to describe passenger cars turned into pickup trucks like the Holden Commodore-based Ute, but it does promise to be a 'Brute', thanks to its heavily modified powerplant.

Bisimoto took Hyundai’s 2.4-liter “Theta-II” four-pot and gave it "strengthened internals with fast-burning flex-fuel, a high-boost turbocharger and an upgraded engine management system to put down more than 700 horsepower to the wheels" via a 6-speed manual gearbox.

Bisi Ezerioha, owner and chief enginee of Bisimoto Engineering commented: “After hundreds of hours of testing and developing new engine components, we’re confident that this power plant can handle what we’re asking from it, delivering a fresh, race-bred take on the 2016 Tucson with performance and reliability at its core.”

The powerful mill under the hood is only one part of the tuning-equation, with Bisimoto hunkering down the Tucson that rides on a custom air-ride suspension with white race-spec wheels and performance rubber. It will also get an aero kit and a custom roll cage.

SOURCE
Posted by Hyundai Dealer at 8:00 AM