Hyundai Says Not So Fast on Self-Driving Car 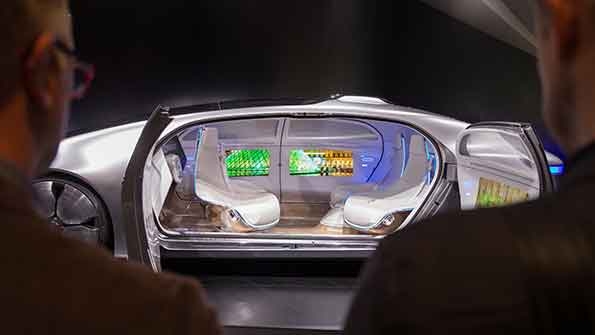 FRANKFURT—The self-driving car is coming, but not as rapidly as people think, said the head of the European operations of South Korean carmaker Hyundai, Thomas Schmid, on Wednesday.
"My personal belief is that autonomous driving might come, but by far not as quick as everyone says in 10 or 15 years," Schmid said in an interview on the sidelines of the IAA motor show.
Alongside the connected car, autonomous driving is one of the new buzzwords in the automobile sector. And futuristic vehicles that soon may be able to drive themselves are among the technological highlights of the 66th edition of the Frankfurt Motor Show, which opened its doors to the world press on Tuesday and will be accessible to the general public from Saturday.


Already, many of the latest models on the road are equipped with assistance systems to help drivers accelerate or brake in traffic.
"I'm 100% certain that this (technology) will be part of future products," Schmid said.
Electronic car parts suppliers, such as the German group Bosch, expect "highway pilots" —which can essentially take over all driving tasks with only occasional need for human intervention—to be ready for the market by 2020. And full auto pilot systems without any human involvement could be ready by 2025.
Big Legal Challenges
But such technology would also bring with it "huge, huge challenges for our legal systems," Schmid cautioned.
"Who is responsible for what? I'm not convinced until now that is a process which can be done in the next 10-15 years."
People's relationships to their cars and individual mobility are undergoing dramatic change, Schmid said.
"The kids today have a different approach to individual mobility. The importance is much lower than in my generation and the need to have an own car is also lower," he said.
The younger generation no longer define themselves via their cars.  And in big cities, car ownership was becoming less and less attractive in view of costs and well-developed public transport systems.
"There's a tendency all over Europe, both in urban areas and even in rural areas where fewer and fewer people are actually getting a driving license," Schmid said.
So, in the future, autonomous driving could be administrated by local authorities and be integrated into cities' public transport systems, Schmid said.
Feeling the Pinch
Turning to Hyundai's current prospects, Schmid conceded that "as a global manufacturer, we are affected" by downturns in emerging markets such as Russia, Brazil and China.
"In Russia, we are doing relatively well. We are one of the manufacturers almost losing no volume. That means we increased our market share" to 0.7% in the first half, Schmid said.
Nevertheless, the weak ruble and the economic downturn was leaving its mark on Hyundai's profit margins.
In Brazil, "we are still doing very well," but growth was slowing as the market fell.
"And in China, this affects us as well as all other big manufacturers."
Nevertheless, "I don't believe that the Chinese market will collapse. But it will slow down."
Last year, Hyundai sold nearly two million vehicles overall in China, giving it a market share of 19%, Schmid said.
"The market in China is still not full. Around 450 million people there would like to have a car. That means from the market side, there are still huge opportunities."
In Europe, Hyundai reported its "best-ever first eight months this year. And we're looking forward to having the best year ever," Schmid said.
"In the European market, I would say by year-end we will be at 3.0%. Our aim is to become the number one Asian brand. And that should mean we go up to 4 or 5%. In concrete numbers we're talking about 700,000 vehicles," Schmid said.