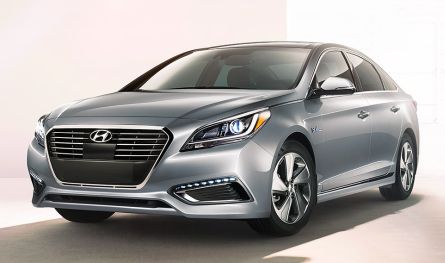 On the heels of the Sonata's redesign for 2015, Hyundai is updating its midsize sedan for 2016. Changes include a minor face-lift for the grille, a larger touch-screen for its multimedia system, a revised suspension and slightly higher prices.
Outside, the Sport model gets a tweaked bumper with a three-bar grille and new 17-inch alloy wheel design. Inside, there's a new 7-inch touch-screen compatible with the Android Auto smartphone integration system and a standard backup camera.
One of the biggest changes is under the skin, however. Some of the 2016 Sonata's suspension components are now aluminum instead of steel, which Hyundai says not only helps the sedan shed weight but will also improve handling.
Powertrains are unchanged from model-year 2015's four-cylinder lineup, but Hyundai says fuel economy is up for 2016 from its 2.4-liter four-cylinder: It was previously rated at 37 mpg on the highway and bumps up to 38 mpg for 2016.
SOURCE
Posted by Hyundai Dealer at 3:01 PM