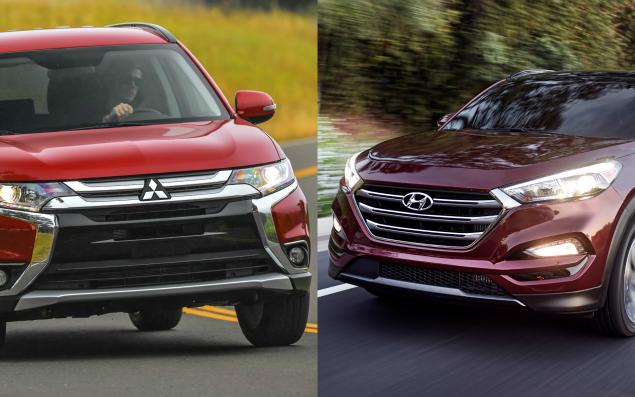 We’re nearing the end of a year spent driving high-performance supercars, tanks, old cars, toy cars, and forbidden fruit, so it seems only natural to return to our control measure for the waning weeks of 2015: a comparison of two midsize crossover SUVs.

The midsize crossover is the new family sedan, targeted at parents with growing families who shun minivans as much as they do larger, gas-guzzling sport-utes. That’s territory where players like the Hyundai Tucson and Mitsubishi Outlander do battle.

Both crossovers were reintroduced for the 2016 model year, and each was restyled and reengineered to lure car buyers. The Hyundai Tucson, as we learned earlier this year, has matured into a refined and stylish offering with one very attractive bottom line. Sitting at the opposite side of the spectrum is a revised, but not completely rethought, Outlander, which Mitsubishi is positioning as a larger, low-cost alternative to other smaller crossovers.

Can a smaller, less powerful crossover from South Korea hold up against a proven nameplate from Japan? Read on to find out: 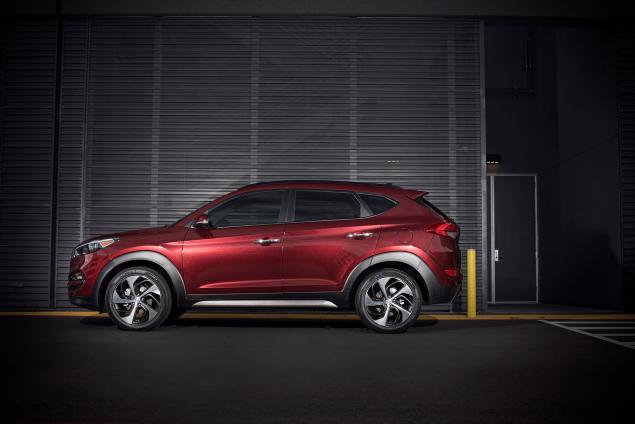 If the Mitsubishi Outlander feels outclassed among midsize crossovers, the Hyundai Tucson is exactly one of the reasons why we have this impression. In our first drive of the Tucson, we found it to be a stylish, powerful, and refined reason to skip over top-selling Japanese and European SUVs. With styling cues clearly borrowed from more expensive vehicles, the Tucson represents where the midsize crossover segment is going...and it’s a direction we like, a lot.

While most press cars arrive decked out to the nines, completely loaded and in the highest-spec trim available, it was a refreshing surprise to receive the mid-level Tucson Eco–as opposed to the Tucson Limited and Sport we got to know earlier this year. The “Eco”name is a bit of a misnomer, considering it’s infinitesimally more economical than the other Tucson variants. At its core, this model is one step up from the base variant, but you’d never know it.

Build quality and style remain the same, but you get slightly smaller alloy wheels and less in-your-face chrome trim. There’s something eerily empty about the interior of the Tucson Eco, however, considering its lack of a large infotainment system screen a steering wheel that’s heavy on the plastic, hold the soft-touch leather wrapping from other models. If you absolutely need more space and cargo room, Hyundai will happily sell you a Santa Fe.

No matter, because the Tucson still feels and drives even smaller than it is. Its turbocharged 1.6-liter four-cylinder engine is gutsy, performs quietly, and more than enough power to compete against the Honda CR-V and its ilk. The 7-speed dual-clutch transmission is tuned for fuel economy, but clicks off seamless shifts when engaged manually for quicker performance. No complaints about ride quality here: the Tucson isn’t perfect, but the Eco’s smaller wheel-and-tire combo showed off a softer, more favorable ride than Tucsons equipped with larger rims.

If we could suggest one improvement, it would be for Hyundai to rejigger the trim levels. The Tucson Eco isn’t available with any option packages, eliminating the possibility of factory-installed navigation, a better stereo, larger wheels, heated seats, keyless ignition, and driver assistance tech–that is, unless you upgrade the entire trim level. If you resist that urge, the Tucson still remains a really compelling choice.

Conclusion: Simply a cut above.

The first thing you need to know about the Mitsubishi Outlander is that you can probably do better. It’s a tough pronouncement, but our hopes were relatively high for the heavily refreshed version of the Outlander that debuted in our backyard, at the New York auto show, last spring. After years of peddling bland products in the U.S. through a sparse dealer network, Mitsubishi seemed finally ready to compete again.

The Outlander, never a particularly strong seller for Mitsubishi at 13,068 units in 2014, was going to lead the charge for a reinvigorated brand. (For comparison, Ford sold 306,212 Escapes over the same time period.) It would be priced at just over $23,000, placing it in the competitive set of smaller, less powerful vehicles. And its styling was new, too! No longer would the Outlander live under the shadow of the cheapskate Mirage.

Execution fell short of expectations, however, as the Outlander has not emerged as the value-laden success story Mitsubishi pitched to us. On the positive side of the ledger, the Outlander does offer plenty of room for people and cargo, as well as a gratuitous third row, meant only for use by small children. (Hoist up the third row, however, and cargo space disappears.)

The darkness of the black interior feels cold and uninviting, and material quality–from leather to plastics–feels cheap. There is no redeeming the Mitsubishi’s outdated infotainment system, particularly in a market with some pretty stellar options. The Rockford Fosgate audio system was mostly bass. The leather felt slippery. Need we go on? (Yes, we will)

The Outlander we drove was equipped with the optional, 3.0-liter V-6 and all-wheel drive: a strong powertrain let down by lifeless steering, rough-riding suspension, and an inattentive 6-speed automatic transmission. All but top-trim Outlanders are powered by a four-cylinder engine paired with a continuously variable automatic. That’s at least worth considering, if space (not pace) is your main object at this price point. We were let down more than slightly by the Outlander’s active cruise control system, which could benefit from recalibration in braking and accelerating.

In a way, we’re searching for reasons to venerate the Outlander’s sheer competency in a field of extremely worthy competitors. We’ve seen and riven the rest of the market, however, and it’s far more interesting.

Conclusion: Feeling out of its league amongst hard-hitting competition.