In late October, the four top HMA technicians traveled to South Korea to compete in the 11th Hyundai World Skill Olympics. After week-long training sessions in Chicago and at HMA’s headquarters in California, the team was primed for success. The guys returned with two medals. 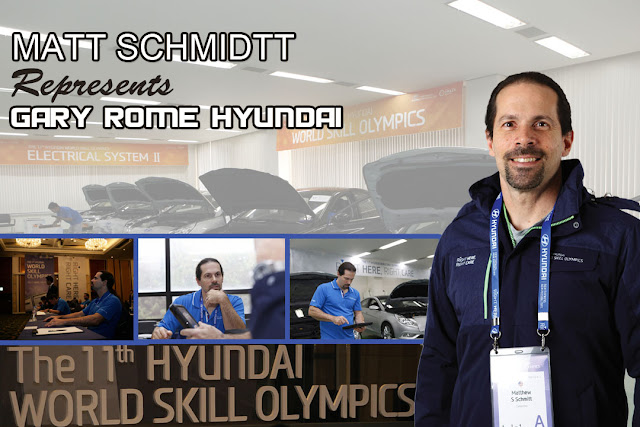 A team chosen at last year’s HMA National Skills Competition featured: Jafte Caldera, Burlingame Hyundai in California; Michael Gyory, Motorworld Hyundai, Pennsylvania; Matt Schmitt, Gary Rome Hyundai, Massachusetts; and Rick Byrne, Pearson Hyundai, Virginia. The team acknowledges that the time together was something special. Team alternate, Erik Koonce from Bill Hood Hyundai in Louisiana said, “The training for World Skill was impressive. From the coaches to the help of HMA administration, it is definitely a once in a lifetime experience.”

Gary Rome Hyundai is proud to have Matt Schmitt on our service department team for over 13 years. We are incredibly happy for his success. This is the second time Matt has participated in the Hyundai National Skills Competition and the Hyundai World Skill Olympics.

“I love repairing vehicles for our customers because it puts a smile on their faces. Whether its maintenance or engine work, I love making our customers happy. HMA does a National Skills Competition every year where they choose 15 of the best technicians throughout the United States to compete; I was one of them and I won.” With the top four spot coveted, Matt’s next step was to compete in South Korea. Matt is also a Mensa member. Mensa is a high IQ society.

Former all-around gold medalist, Jasen Nowacki and Jason Emerson joined with regional trainers to prepare the team. Coach Jeff Wienberg spearheaded the vehicle bugging efforts. Some of the exercises were quite “nasty.” Additionally, the team had to get familiar with a few diagnostic tools not used in our market.

The training was not all work. The team enjoyed a few extra activities. Rick Byrne earned the top spot in go-kart racing. The guys also compared the finer points of Korean barbecue and good ol’ American barbecue.

Once in Korea, the team again had a full slate of activities. Tours and dinners accompanied the competition. It was a chance to rub shoulders with the technicians Hyundai recognizes as the best in the world. In the competition, Jefte Caldera took the gold medal in the Written & Component portion. Michael Gyory garnered Silver in the Chassis section. Congratulations to both men in their success against the best.

Our Gary Rome Hyundai family is filled with hidden gems. Individuals who are interested in self-improvement and helping others. We are very fortunate and love having Matt Schmitt as a member of our service department team.

Parts of this article originally appeared in TechTimes Magazine