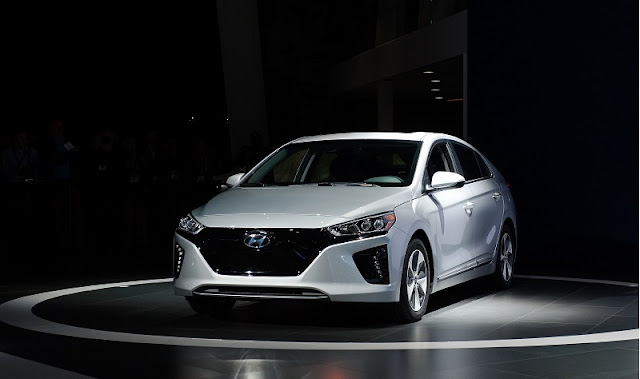 The first Hyundai electric vehicle has yet to hit the U.S. market, but the automaker has revealed plans to set a new standard for the lower end of the segment. Like Tesla and General Motors, the Korean manufacturer has plans on launching a 200-mile EV by 2018. That will only be the first step. According to a new report, an electric model capable of 250 miles of range will follow two years later.


Byung Ki Ahn, Hyundai’s director of green vehicles, told Autoblog about his company’s plans to push the range envelope to unprecedented levels in the affordable class. While Tesla blew past 250 miles years ago and Audi has expressed confidence in its ability to make it to 300 miles, lower-end car makers have been content to stop at 200.
Considering the longest-range model remains the 107-mile Nissan Leaf, the mark of 200 miles is enough of a benchmark for most automakers. The Chevy Bolt EV due in 2016 will get there first. Tesla CEO Elon Musk says the Model 3 (at least 215 miles) will join the club in 2017. Nissan and Ford are expected to follow with their own models sometime in the following year or two.
In the case of each of those manufacturers, we have seen their first offerings in the segment. While the Tesla Model S has established its reputation worldwide, the volume-selling Nissan Leaf has achieved its own loyal following. Ford Focus Electric and Chevy Spark EV have made the acquaintance of consumers as compliance cars. But an all-electric Hyundai has yet to appear.
The 2016 Hyundai Sonata PHEV is the brand’s first model to run on battery power alone. Among all plug-in hybrids on the U.S. market, this model’s 59 miles per gallon combined economy (99 miles per gallon in electric mode) is bested only by the BMW i3 REX and Chevrolet Volt. In that respect, Hyundai has proven its ability to compete with the best in plug-in efficiency.
Of course, Hyundai subsidiary Kia has shown its mettle with the Kia Soul EV that has been around on the U.S. market for a few years. Due to limited availability and relatively little promotion, we never saw this model take off in America, but the Korean motor group proved it has the capacity to produce a highly efficient (120 miles per gallon city) and long-range EV (93 miles) at a competitive price point.
Nonetheless, the real test comes when the Ioniq series begins arriving in different world markets this summer. Hyundai laid down the gauntlet by saying the hybrid model would top Toyota Prius in efficiency. After Prius Prime set a new standard for plug-in hybrids, we wonder if Hyundai plans to make that model’s elite economy numbers (120 miles per gallon equivalent) its next target. Either way, much is riding on the Ioniq’s three-pronged debut.

As Hyundai officials made clear at the U.S. debut of the Ioniq, this car must be a success to bode well for future electric products from the brand. Consumers are already comfortable/happy with the Prius if they want a standard hybrid or plug-in; they are likewise happy with the Nissan Leaf if they want an EV with about 110 miles of range, as the Ioniq will feature.
In order to have an edge over the competition, Hyundai must deliver on that fun-to-drive element consumers once complained Prius did not have. (New models have enjoyed a better reception.) Stylistically, the automaker did excellent work in trying to remove the dorky EV stigma from the Ioniq line. These cars don’t scream “it’s electric!” and that is exactly how the designers planned it. Having a lower price than the competition wouldn’t hurt.
There is still no clear recipe for the success of a plug-in vehicle in America; some quality cars failed because the automaker saw limited profit potential and kept them as compliance vehicles, others simply failed because the drive or range was not good enough for the cost. Before a Hyundai electric vehicle shoots for 200 miles followed by 250 miles in the lower end of the segment, its first effort will have to make a great impression on consumers.