Hyundai's new wearable robot turns you into a mech pilot 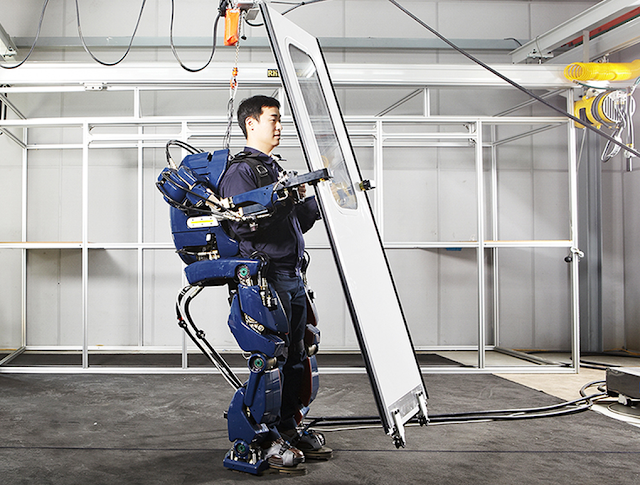 South Korean automaker Hyundai has unveiled what is apparently a new robotic exoskeleton. In a blog post the company compares its "wearable robot" prototype to an Iron Man suit, saying it gives the wearer extra strength, allowing them to lift objects "hundreds of kilograms" in weight. The company says that in the future the exoskeleton could be used in factories, by the military, or to help with physical rehabilitation.

It's not entirely clear from the blog post (thanks Google Translate for doing what you can), but the suit appears to be a development of Hyundai's H-LEX platform — a similar exoskeleton the company unveiled last year. The H-LEX suit (it stands for Hyundai Lifecaring ExoSkeleton), is more lightweight than the prototype in these new pictures, but had near-identical functionality, designed to help senior citizens and the physically disabled.

Hyundai isn't the only company working on robotic exoskeletons, of course. Panasonic is developing similar suits for factory workers; some researchers are working on lightweight, leg-only contraptions for everyday use; and car companies like Audi and BMW are already trialling exoskeletons that let engineers sit in mid-air without straining their backs. It's not exactly Iron Man, but it'll do for now.