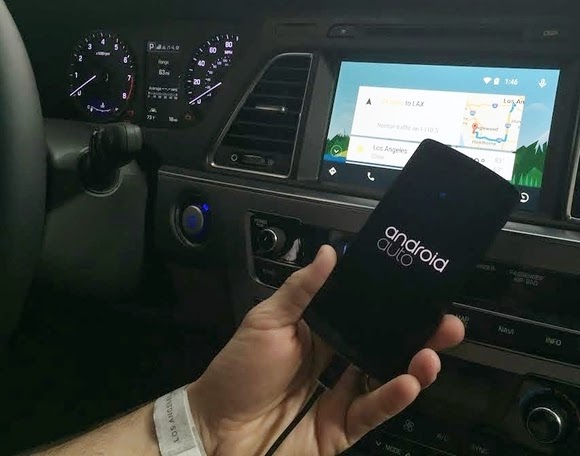 LOS ANGELES—I went to the LA Auto Show in search of Android Auto and Apple CarPlay, Google and Apple’s bids to bring your smartphone’s screen to your car. CarPlay’s so far appeared only in a Ferrari and a Pioneer aftermarket line, while Android Auto is still in beta. Still, at a small Hyundai booth in the South Hall, two separate 2015 Hyundai Sonatas demonstrated the technologies. No other automakers were showing them.

In the CarPlay-equipped Sonata, the Apple rep plugged in her iPhone 6 Plus and showed me how Hyundai has integrated CarPlay into the automaker’s own BlueLink infotainment system. A small icon for "CarPlay" appears at the bottom of the main screen, which you tap to enter CarPlay.
apple carplay main screen la auto show 2014 Sarah Jacobsson Purewal

Apple CarPlay's main screen shows buttons for the CarPlay-specific functions, as well as a button to get to Hyundai's own BlueLink infotainment system. 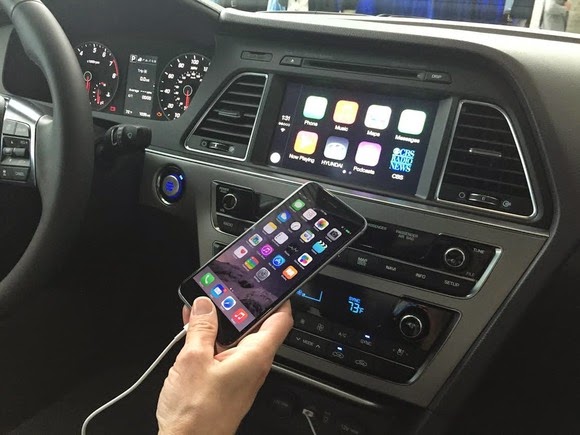 CarPlay looks a lot like your iPhone's home screen, minus all the extraneous, not-car-friendly apps, of course. On the left side of the touchscreen there's a small bar that shows the time, your phone's signal strength, and the Home button, which looks like the Home buttons of older iPhones. The rest of the screen is dominated by apps, which appear the same as they do on the iPhone, just larger. Each screen holds eight apps, and you can swipe to the left to see more apps.

Apple has optimized iOS 7.1 (and higher) for CarPlay. When your iPhone is plugged into the car, phone-based tasks run a little smoother. For example, when you tap the phone icon, Siri asks you who you want to call right away. "We figured that you wouldn't be tapping the phone icon unless you wanted to use the phone," the rep tells me. "So you don't have to go through a litany of commands every time." To talk to Siri via CarPlay, you can either tap and hold the Home button on the touchscreen (like you'd do on your phone), or you can tap the voice button on the Sonata's steering wheel. It was noticeably easier than other in-car voice systems I’d tried. 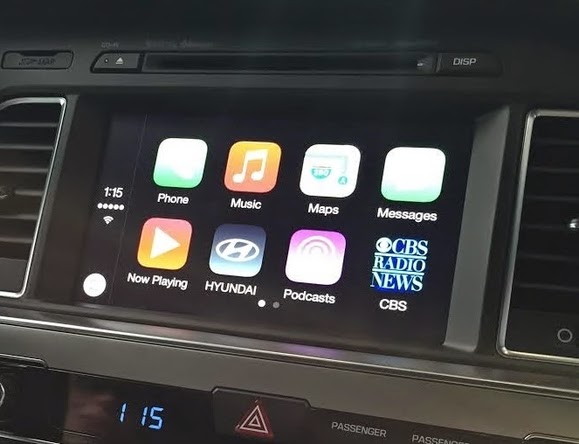 Apple has also optimized its maps program to scour your emails and texts for important addresses. When you open up the Maps app on CarPlay, you'll see a list of places you might potentially want to go, such as offices, people's homes, and restaurants. According to the rep, Apple makes sure to pick out addresses only from people who are in your contacts list, so you won't end up with addresses to random stores in promotional mailings, for instance.

While your iPhone is connected to the car, it won't light up unless you want it to. The default screen is black, but if you tap the phone accidentally, you'll see a mirror of what's showing on the touchscreen. You can also bypass this screen and start using the phone to its full extent, but Apple doesn't recommend that. Still, the rep tells me that ultimately they figured it was safer not to lock people out of their phones, lest they get frustrated and stop using CarPlay altogether. 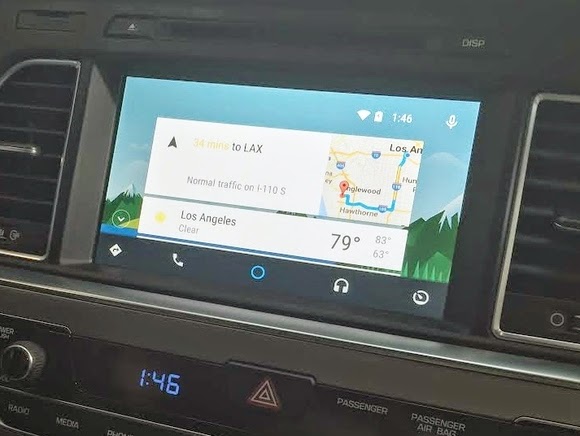 Android Auto’s still in beta, but the Google rep in the second Sonata showed me how all you have to do is plug your phone into the car to launch it. There's no button from the main screen, as with CarPlay.
android auto beta main screen la auto show 2014 Sarah Jacobsson Purewal

Unlike CarPlay, Android Auto doesn't look at all like what you have on your phone. Android Auto hews more closely to Google Now. The main screen has Google Now cards, which pop up with information or features that Google thinks you want at any given moment. For example, when I got into the car there was a Google Now card for a trip to LAX. "I scheduled a flight out of LAX at 3 p.m.," the Google rep tells me. "So Google figures that I probably want driving directions to LAX."

To get those directions, all he has to do is tap the card, and Google Maps automatically opens up, full-screen. The rep walks me through a scenario where he asks Google to tell him the weather in San Diego, and then follows up with a question about what time the zoo is open. Although he never says "San Diego Zoo," or "the zoo in San Diego," Google assumes (this time, correctly) that he's talking about the San Diego Zoo, because of his previous question.
android auto beta music la auto show 2014 Sarah Jacobsson Purewal

You can also pick a main function by tapping on one of the five icons at the bottom of the screen for maps, phone, home, and music. Android Auto lets you stream music from various sources, make phone calls, and even text people via voice. 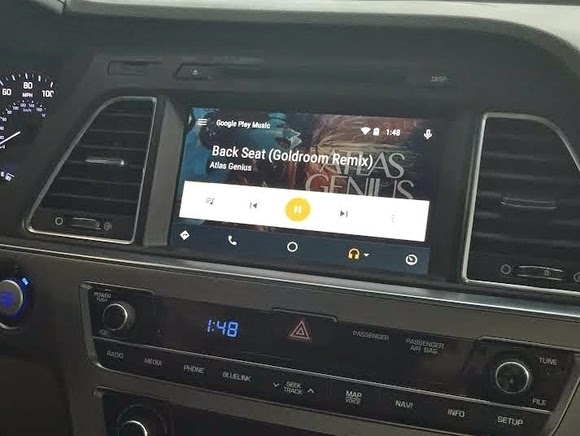 The fifth icon onscreen looks like a speedometer. Eventually, and tantalizingly, that icon will take you to the car’s diagnostics systems. With CarPlay, you'd have to exit out of CarPlay to find the internal diagnostics; with Android Auto, you can go straight to the source.

Unlike CarPlay, Android Auto does lock you out of your phone. If you want to use your phone for non-approved activities (such as playing games or watching videos), you won't be able to unless you unplug it from the car.

Hyundai wouldn't tell me when Apple CarPlay or Android Auto will be available in its cars, but it will debut in the 2015 Sonata model and be pushed out as an update to current owners. It’s not certain whether the 2015 Sonata will be the first car on the road to have both, but it's definitely the first one we've seen.