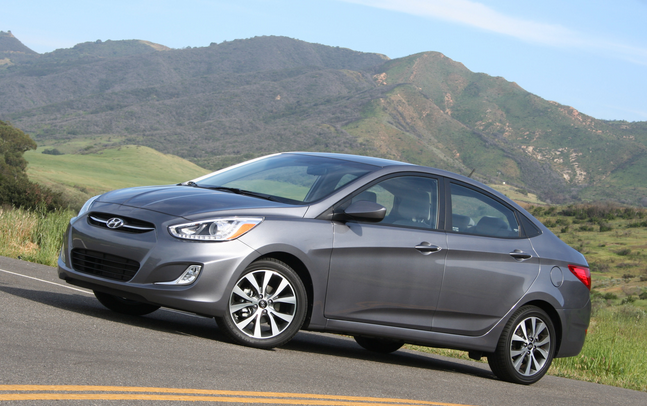 We’ve been stunned — stunned, we say! — to see what the South Koreans hath wrought: The high-lux Genesis sedan, the sporty Genesis coupe, the well-sorted Sonata, and even the weird-but-lovable Veloster. But what ever happened to their small, affordable cars? That standard is currently borne by the Accent. It received a major re-do in 2012, when it was transmogrified from a bargain-bin special to a credible and capable subcompact. We last checked in with the Accent in 2013 when we compared it to the Chevrolet Sonic. Our verdict: The Sonic was more fun, but with its lower price, better fuel economy, and longer warranty, the Accent was the better buy. 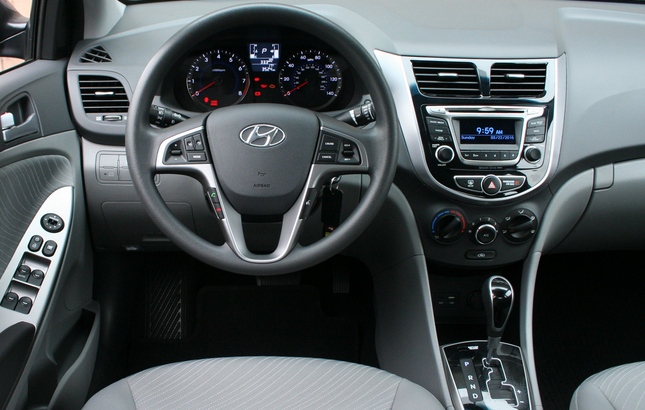 For 2015, the Accent gets a mild refresh consisting of minor styling changes and an equipment reshuffle. There’s no question what Hyundai was going for here: The sedan’s new taillights bear a passing resemblance to those found on Mercedes sedans, and the white stripe along the upper edge of the headlights looks at first glance like the light-pipe “eyebrows” used by Mercedes, BMW and others. We’d like to be cynical — didn’t Chrysler attempt to dress up their 1980s-era K-cars with German styling cues? — but the truth is that the Accent looks pretty classy for an inexpensive car. Our test car looked surprisingly mature with its sober gray paint, though it was helped out by an $800 Style package, which includes 16-inch alloy wheels, projector-beam headlights with LED running lights, and rear disc brakes.

Inside, the Accent’s center stack has the plunging-neckline look initiated by the previous-generation Sonata (and one that we miss in the new version). The aforementioned Style package adds gloss-black trim and nicer seat cloth. But the black trim around our test car’s transmission shifter had already pitted quite badly; whether this was a defective finish or use of a non-compatible cleaner, we don’t know. And while we’re complaining, it’s too bad that features like leather and navigation aren’t offered on the Accent as they are on some of its competitors.

We liked the front seat accommodations, and the back seat wasn’t too bad; it felt a bit tight on legroom compared to some of the roomier subcompacts on the market, but the seat itself is comfortable and supportive. The deep trunk holds 13.7 cubic feet of cargo, quite generous for a compact sedan, though the lining material doesn’t look terribly substantial. 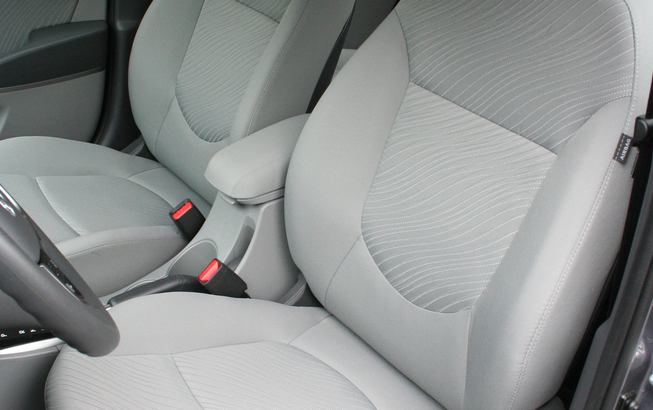 We found the Accent surprisingly satisfying (if not particularly thrilling) to drive. The 1.6-liter engine gets direct fuel injection, and its 137 HP and 123 lb-ft of torque bests nearly all of its competitors (the Sonic bests it by one hp and two lb-ft). The Accent has an Active Eco mode that tones down the accelerator response to help you save fuel, but it leaps forward when you push the pedal to the carpet, and once out on the road it settles down to a quiet cruise. EPA fuel economy estimates are also at or near the top of this competitive class: 27 MPG city and 38 MPG highway with a six-speed automatic transmission and 26/37 with the six-speed manual. We were perfectly happy with the 33.2 MPG average we saw in our automatic test car.

The Accent’s ride is consistent and comfortable, though it does take the bumps a bit hard, a reminder of its cheap-car roots. We were surprised by the handling — not that the Accent is a wannabe Corvette, but it wound its way through our favorite curvy road with composure, though it quickly hit the limits of its economy-minded tires. Too bad about the steering, which feels lighter and less precise on-center than we’d like.

The sordid matter of coin

Accent sedans are sold in a single trim level (GLS), while hatchbacks can be had in GS or Sport (formerly known as SE) trim. The Accent GLS sedan we tested starts out at $15,555 (including an $810 destination charge), and while that puts it far away from the least expensive car in this segment, it does include a lot of nice-to-haves, including power windows and locks, remote keyless entry, air conditioning, and an iPod-compatible USB port for the stereo. The GS hatchback is similarly equipped and priced just $250 higher. 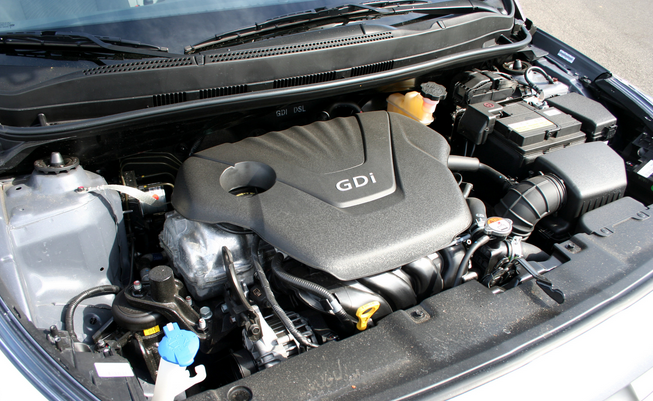 Along with the aforementioned $800 Style package, our test car had an automatic transmission ($1,000) and a Preferred Equipment Package (Bluetooth, cruise control, center armrest, adjustable steering column, and stereo controls on the steering wheel, $600). That brought our car’s total to $18,080. For comparison, a similarly-equipped Nissan Versa SV lists for $16,855, while a comparable Chevrolet Sonic LT goes for $18,665. The Sonic is better to drive and better protected (with 10 airbags versus the Accent’s six) and the Versa gives you better value-for-money (even if you add navigation, it’s still cheaper than the Accent), but neither can touch Hyundai’s warranty, which covers the whole car for five years or 60,000 miles and the powertrain for 10 years or 100,000 miles.

When the Accent first showed up for our test drive, we didn’t think we would walk away impressed given how many competent competitors it has. But a few days spent behind the wheel changed our mind. The Accent may not be the greatest to drive, but we came to respect the little Hyundai for its mature looks, comfortable interior, deep trunk and good real-world fuel economy. The Accent may not be as stunning as some of the cars in Hyundai’s lineup, but it’s a solid subcompact that is good as its job. Evidently, Hyundai hasn’t forgotten what small cars are all about.