Hyundai launched its first plug-in hybrid vehicle today at the Canadian International Auto Show in Toronto. The 2016 Hyundai Sonata Plug-in Hybrid Electric Vehicle (PHEV) is expected to travel up to 35 km on electric power and can recharge in as little as two and a half hours with a Level 2 charger. Once the maximum electric-only range has been reached, the Sonata PHEV goes on to perform just like a regular hybrid vehicle.

The company also introduced an all-new Sonata Hybrid. Sonata Hybrid continues to visually differentiate itself from other Sonata models with purposefully unique wheels and front and rear fascias that improve aerodynamics while highlighting its advanced technology and efficiency. The 2016 Sonata Hybrid is expected to deliver improved fuel economy over the previous generation Sonata Hybrid. 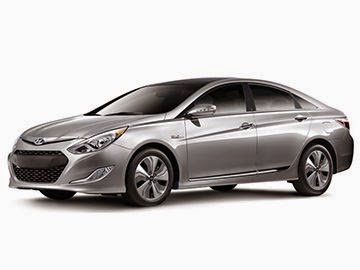 Sonata PHEV and Hybrid will be built at the Asan plant in South Korea and will go on-sale later this year. Prices will be announced closer to the vehicles’ on-sale date.

Although the Sonata PHEV is very technologically advanced, it will behave much like the regular Sonata Hybrid from the driver’s seat. A 9.8 kWh lithium-polymer battery pack, roughly five times larger than the Sonata Hybrid’s battery, is expected to give Sonata Plug-in Hybrid an all-electric range of up to 35 km, farther than any other intermediate PHEV sedan.

Sonata Plug-in Hybrid uses a six-speed automatic transmission with Hyundai’s Transmission-Mounted Electrical Device (TMED), a 50 kW electric motor, in place of a torque converter. This electric motor is 32 percent more powerful than the motor used the in regular Sonata Hybrid and allows EV operation at higher speeds and for greater duration.

The Sonata PHEV will be available nation-wide later in 2015. Sonata PHEV buyers will be eligible for a provincial tax credit in Ontario and Quebec.

The heart of the 2016 Sonata Hybrid is the downsized 2.0-litre Nu GDI four-cylinder engine (replacing a 2.4-litre MPI engine) paired with a six-speed automatic transmission that houses a more powerful 38 kW electric motor and clutch where the torque converter would normally be found. Sonata Hybrid’s Transmission-Mounted Electrical Device (TMED) delivers the same responsive, engaging driving characteristics Sonata owners expect while improving fuel economy through the use of the larger electric motor.

Sonata Hybrid and PHEV use the same functional design changes to improve their drag coefficient to a class-leading 0.24 as well as provide visual cues to distinguish the hybrid models from other Sonatas. Visual changes to the PHEV’s exterior include a charging port on the driver front fender. Both models feature a unique grille, front and rear bumpers, front fenders, front and rear lights, chrome side sill moldings, badges and new wheels from the regular gasoline-powered Sonata.

Hyundai engineers implemented many active safety and convenience technologies for the 2016 Sonata Hybrid and PHEV to assist drivers and help prevent collisions. No longer reserved for luxury cars, advanced technologies such as Forward Collision Warning, Blind Spot Detection, Rear Cross Traffic Alert and a Lane Departure Warning System are all available in the Hybrid and standard on the PHEV.

All 2016 Sonata Hybrid and PHEV models come standard with iPod/USB and auxiliary input jacks, SiriusXM satellite radio and Bluetooth phone connectivity with phonebook transfer and voice-recognition. An 8.0-inch navigation system, HD radio and Infinity premium audio system are available on the Hybrid and standard on the PHEV.