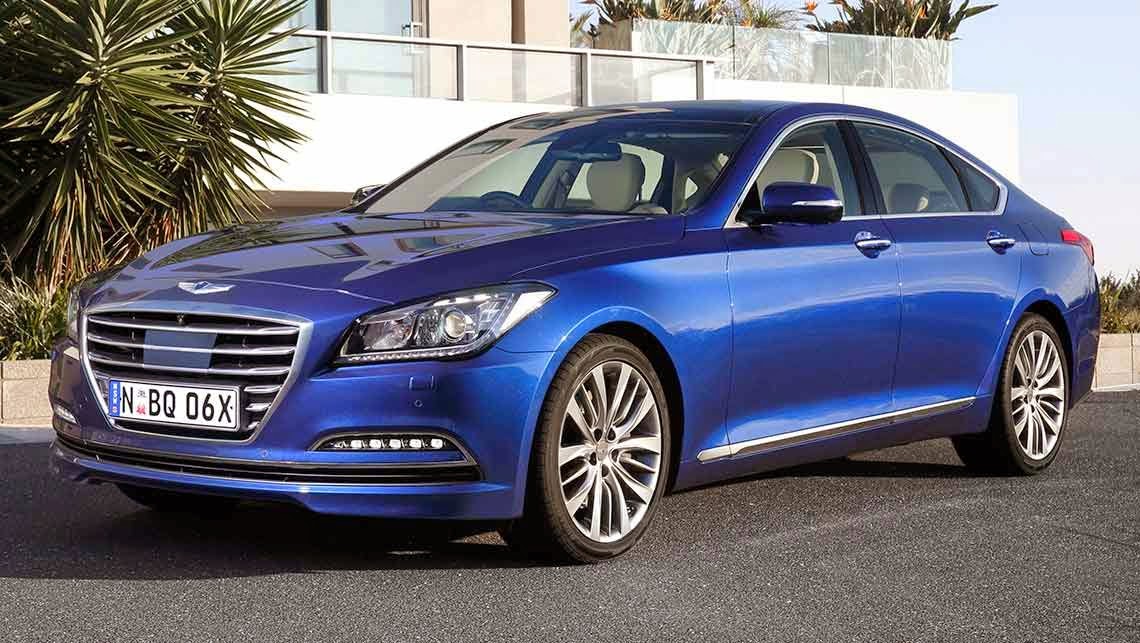 Anybody who doubts that Hyundai is gunning for the number one in the world has rocks in their head. Big heavy ones. Korean companies do not settle for anything less than number one. The second-generation Genesis (our first taste here in the Antipodes as the gen-one had its steering wheel on the wrong side) is proof.

What's different about Hyundai's unstoppable rise is the way they're going about it. They've always done their own thing in Korea, reinventing themselves time and again when they strayed off the beaten path.

The Genesis is a gamble for a Korean company in foreign markets whose default setting for luxury is marked, Britain or Germany. If Hyundai gets the Genesis wrong there will be howls of derision, or at best patronising pats on the back - "Nice try, you'll get there one day". But if they get it right...

The only way to describe the Genesis' pricing is aggressive - kicking off at $60,000, it's the most expensive Hyundai money can buy, but with a spec list like this, you won't feel at all short-changed.

Your sixty large buys you a huge cabin with a seventeen speaker stereo, auto headlights and wipers, LED ambient lighting inside and out, dual-zone climate control, keyless entry and start, powered front seats which are heated and cooled, satnav, front and rear parking sensors, and plenty of other bits and pieces.

You can have a lot of the more useful features in the $11,000 Sensory Pack. It's a good middle ground that, for example, features the excellent heads-up display.

The Genesis is like no other Hyundai. For a start, it's gigantic - it looks easily as big as a BMW 7 Series (it isn't) with the road presence to match. There's a lot of BMW from most directions, but with a sharper approach to the creasing and character of the sheet metal.

Towards the rear it's more BMW 6 Series Gran Coupe and is all the better for it. The style is understated and technocratic.

The big wheels from the Ultimate pack help make it look lower and sleeker, too. 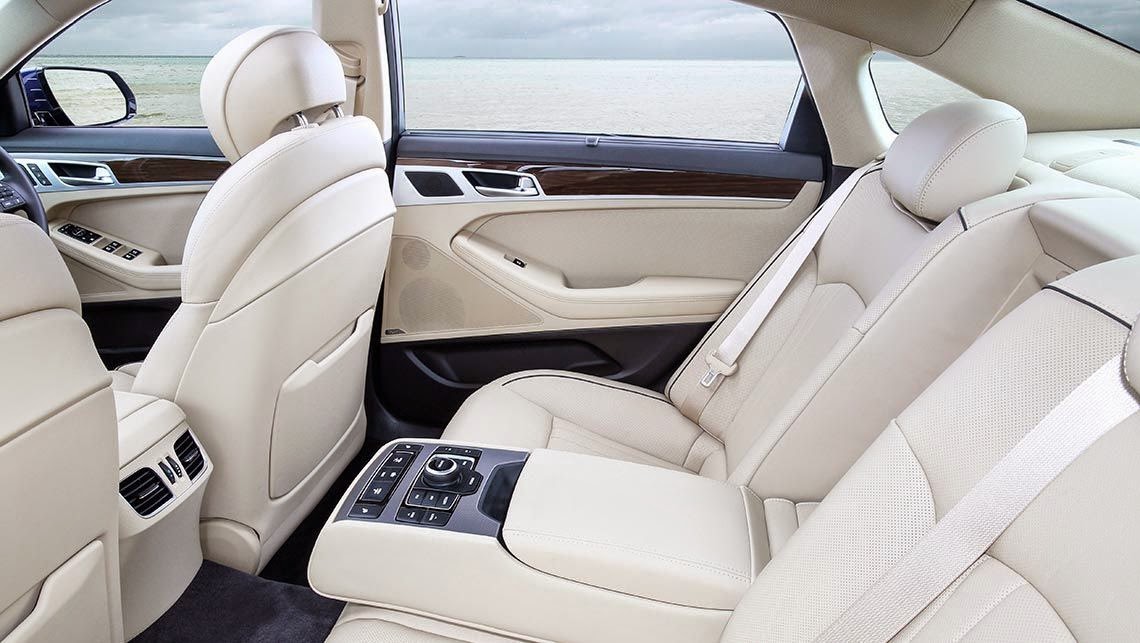 Inside is also very Germanic, but with a bit more of a Lexus feel. Our car had the lighter leather which meant that the wood and the metal materials didn't necessarily work well together.

The interior is expertly put together and feels like it will last forever.

The only jarring moment is the gear selector is shared with our long-term Hyundai i30 - it looked a bit cheap in what is otherwise a beautifully executed cabin - it needs more heft.

On Australian-delivered cars there is just one Hyundai badge, sitting proudly on the boot - you get the feeling this was debated long and hard and when the decision was made to go for it, a big one was chosen.

However, the winged Genesis branding takes pride of place everywhere else. When you approach the car at night and the puddle lamps come on, the Genesis logo is projected on to the ground, crisp and clear.

The Sensory and Ultimate packs add blind spot sensors and around view cameras.

The 9.2-inch screen splits the asymmetric air-conditioning vents. The software is unique to the Genesis and a huge leap forward over the rest of the Hyundai range - classy, smooth graphics, a good responsive screen.

You control the seventeen speaker stereo from here, which kicks out a rich sound and an impressive Bluetooth performance - rear seat passengers can also run the stereo from their armrest. The satnav is detailed and chatty, while the excellent heads-up display shows a configurable information set in strong, clear graphics.

The Genesis is powered by Hyundai's own 3.8-litre V6 developing 232kW and 397Nm, mated to Hyundai's eight-speed automatic transmission.

Despite weighing just under two tonnes, the Genesis completes the dash to 100km/h in 6.5 seconds.

It has a claimed 11.2L/100km on the combined cycle. In what must be a first, we got below that, averaging 10.8L/100km over two weeks. And that's without stop-start fuel-saving to blunt the effect of lot of city driving.

We'd still like to try the V8 - only available in left-hand drive markets - though. 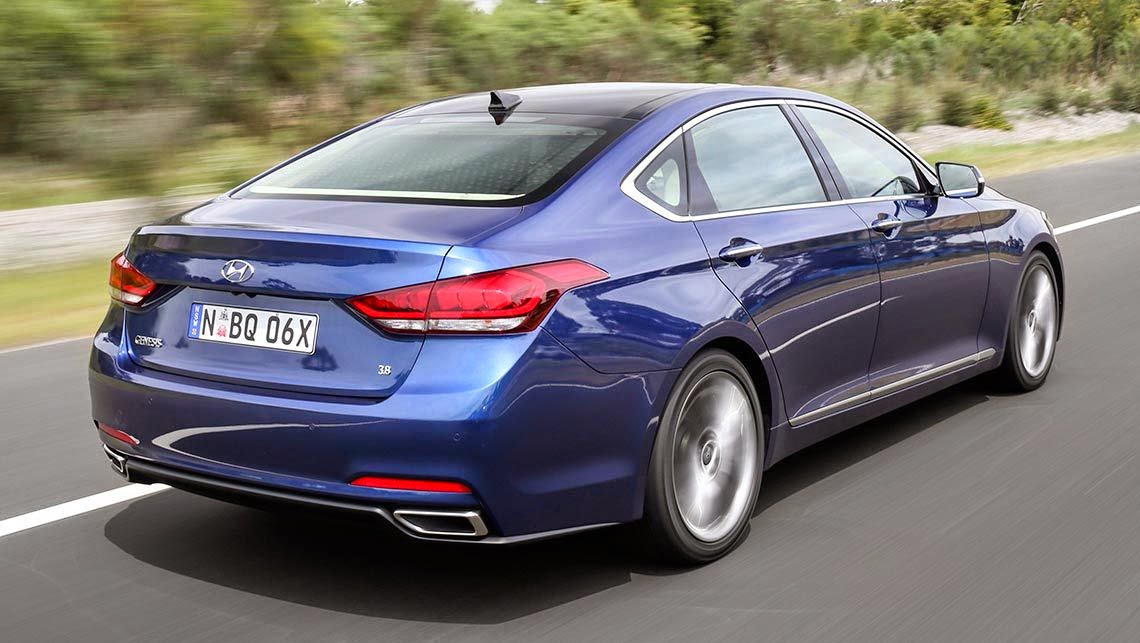 At five metres long, with a ride firmly pitched in the luxury camp, the Genesis is not going to tempt you into a track day, even with rear wheel drive.

Blindfold your passengers and swap them between a Lexus, a BMW and a Genesis and the overwhelming impression they'll get is one of incredible smoothness.

Sitting in the back of the Genesis, it's easily as good as the German and luxury Japanese competition. The seats are hugely comfortable, there's ample head, leg and shoulder room and it feels lot nicer than anything within a bull's roar of its price.

No matter where you sit, it's an incredibly quiet car. The engine is distant whoosh, the tyre noise muted and there's almost no wind or ambient noise. It's supremely comfortable and the excellent stereo will wash away what little noise does invade.

It certainly feels its weight from the driver's seat, with a competent, soft turn-in, but if you're wanting sudden movements, this isn't the car for you.

On fast flowing roads you can have some fun, but things will get floaty and that will quickly kill that fun. The ride and isolation from the rest of the world is completely worth it.

The Genesis is not quite a match for cars twice its price but it makes you think what's possible. It doesn't have the dynamic brilliance of a BMW or the self-assured faultless execution of a Mercedes. Lexus ought to be worried, though - why would you have an LS when you could have this? The only answer is 'badge'.

The Genesis is an epoch-making car for the Korean manufacturer. As the company has got better, there are fewer excuses for overlooking it. While the Genesis is pitched into a shrinking market, it's not really meant for the average i30 buyer to buy, but to see.

It's bristling with tech and is not only a halo car but a shot across the bows of both Lexus and the Germans. Attached to that shot is a note: "We're coming for you." In other words, Hyundai got it right.