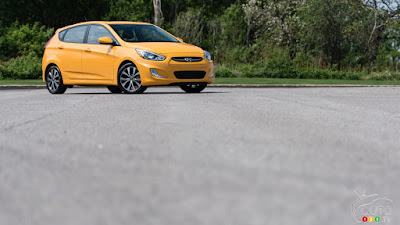 Hyundai’s Accent has kept momentum going in showrooms since it first arrived in 1995. Cute, inexpensive (perhaps even cheap…), economical and fun (enough) to drive, the subcompact 4-door sedan and 3-door hatchback allowed many people to become mobile, much like the Pony did a little over a decade previously.

Although it was not the most reliable of cars, the return on the small investment for buyers turned out to be worthwhile and the car’s reputation as transportation ensured survival.
Hyundai readjusted the Accent over the generations, and this 4th iteration of the car is the best equipped, most stylish of them all. It is with this car (along with Kia and their Rio) that the Koreans turned the tables on all by offering amenities never before seen in “econo-boxes.”

The 2015 Hyundai is a worthy buy and here are 5 key points in its favour:
Styling
The Accent is spared over-the-top design faux pas’ that are found on the Toyota Yaris and Honda Fit, to name a pair, where their anime-like fasciae are laughable and distracting.

In my opinion, the hatchback is a more attractive proposition than the sedan, for both aesthetic and usability aspects. The higher the trim, the nicer the car looks thanks in large part to the 16” alloy wheels. My tested SE also included fog lights and a rear spoiler.

The Accent’s fluidic design is handsome and clean. The cabin was conceived with ergonomics in mind and the result is a place where passengers find what they need and are looking for easily and quickly.

Amenities and value
Not so long ago, power windows and door locks (along with air-conditioning) were big deals in small cars. In 2015, they are all essentially standard.

What may surprise is that for under $20k, features like satellite radio, Bluetooth, front heated front seats, leather-wrapped steering wheel, keyless entry, a power sunroof, LED headlights and fog lights are all included.

A basic Accent sedan starts at $13,249 while the hatchback requires $250 more. The Accent is actually one of the least expensive cars on the market at the moment. There is the issue known as the Nissan Micra, but beyond that the Accent offers loads of value for the money.

At $18,849, the SE automatic is a worthy consideration. Hyundai will generally throw in an incentive to make the deal that much sweeter.

Some of the Accent’s competitors include amenities like leather seating surfaces, navigation, rearview cameras, and more. The next Accent, expected later on this year, will likely have all of these items and more on offer.

Roominess
Many subcompact cars, such as the Ford Fiesta and Toyota Yaris, skimp on interior space. Front room and access will be good, but leg, shoulder and headroom will be limited for two adults in the rear. Meanwhile, the trunk is barely large enough to hold a lunchbox.
The Accent plays a different card. Its cabin is spacious enough in the rear to squeeze three adults width-wise for a short period of time. What’s more, the hatchback’s 600 litres of boot space are generous enough for a good-size amount of weekend gear.

Powertrain
In this department, the Accent shines. Its 138 horsepower 1.6L 4-cylinder engine is one of the more powerful in the segment. As well, transmission choices are between a 6-speed manual and automatic.

The mill is more than at home under the Accent’s bonnet. Its power is well managed by the smooth-operating autobox. The latter will downshift at the driver’s whim. Despite some occasional hurried driving, the cabin remains sufficiently quiet for a normal-volume conversation to take place.

Despite being one of the more horsepower-rich cars in the category, its fuel consumption numbers are reasonable. I averaged 7.5L/100km during my weeklong test.

On the road
Where the Accent takes a mild tumble is on the road. Steering lacks precision and its assistance is random or so it seems.
The car’s ride quality is not great, either. The suspension soaks up surface imperfections well enough, however, it disposes with the compressed dampers’ and springs’ energy poorly, upsetting the car’s otherwise fairly neutral behaviour. The Accent prefers easy driving to anything resembling spirited action behind the wheel.

The 2015 Hyundai Accent
On a typical commute, the Accent displays all the right moves and proves to be well-suited for family duty.
In the segment, the Honda Fit may be ugly but provides the best interior space of the group. The Micra is the price leader, while the Ford Fiesta and Honda Fit are the better drivers.