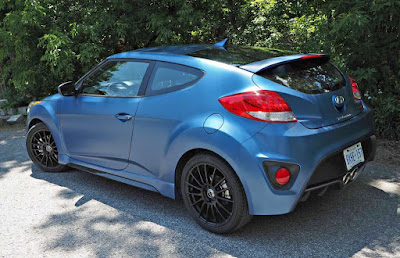 A three-door (yes, three-door) hatchback with a little more style than power

Pros Good looks (inside and out), newfound handling prowess, fair pricing
Cons Ride is a little stiff, engine a little flaccid and I wish they hadn’t jettisoned the navigation system
Value for money Pretty darn good considering the equipment
What would I change? There’s nothing here that a lighter flywheel, bigger turbo and boosted compression won’t fix
How I would spec it? Other than more power, the only thing I miss is the navi system. Unfortunately, it’s not available even as an option.
Let me state, from the very start, that I am not even remotely the market demographic for a Hyundai Veloster. I have never been — nor will I ever be — hip. I couldn’t distinguish an Arcade Fire lyric from a Fleet Foxes melody, haven’t pretended to like single malt for at least 30 years now and every time I try to grow a beard, I break out in eczema. I am, for wont of a better description, well past my sell-by date.
But were I 32 years old, fashion-impaired and prone to promoting obscure indie bands, I might be tempted by Hyundai’s latest Veloster, the turbocharged 2016 Rally Edition. For one thing, it’s a delicious combination of cute and menacing. The shape is all rally car bump and grind but the matte blue finish adds a certain approachability. Where something like the Fiesta ST might hide its hot-rod heart under a plain brown wrapper, the Veloster Rally Edition wears its devotion on its sleeve.
That allusion to performance is not completely illusory. Those RAYS 18-inch wheels may seem just another tarting up of the proverbial handbag, but they do indeed augment performance, each one weighing some 2.2 kilograms less than a standard Veloster rim. That’s unsprung weight, folks, the most important weight to be reduced, ensuring all kinds of benefits like improved handling and a better ride, not to mention helping acceleration through the gears.
Any improvement in ride they might offer is much appreciated because the Rally Edition also gets a serious suspension upgrade, the springs being stiffer, the dampers firmer and the sway bars even thicker. Hyundai Canada says the whole plot has been lowered as well but are not quite sure by how much: I’d say about 10 mils but I didn’t get out my trusty Stanley tape measure to confirm. Whatever the exact figure, lowering of the centre of gravity is always a boon to handling.
Indeed, my one question about the Rally Edition is the following: Why didn’t Hyundai bring this sportier version out sooner? The base Veloster came out in 2012 and was all show and absolutely no go. Two thousand and thirteen’s Turbo version helped solve (some of) the power paucity, but it was still a bit of the aforementioned tart’s handbag, all style and very little (handling) substance.
Not the Rally Edition. It’s not going to challenge the Ford’s Fiesta for the hot hatch handling crown, but roll is largely mitigated, grip from the low-profile Kuhmo tires is superior (probably attributable to that lower centre of gravity and the aforementioned wheel weight reduction) and, will wonders never cease, this is my second Hyundai tester in a row with something bordering on communicative steering. Like the Spec-R version of the Genesis Coupe I drove two weeks ago, that greater feedback comes hand-in-hand with heavier steering meaning the Veloster occasionally requires some manhandling. But it seems that Hyundai has genuinely discovered that “sporty” means more than just adding a racing stripe.
Unfortunately, there’s been no boost in the 1.6-litre Turbo’s power output. In complete contrast to the standard Veloster Turbo’s performance — not enough handling for the power — it now seems that it is torque that is in arrears. What’s weird, however, is that the Rally’s spec sheet would seem to promise more. The 1.6L claims 201 horsepower and only has to motivate 1,335 kilograms. That’s roughly the same power-to-weight ratio as the 197-hp/1,224-kilo Fiesta ST, yet the Hyundai feels decidedly flaccid by comparison. It’s not about the torque, Hyundai’s turbocharged four producing its 195 pound-feet (a creditable number for such a small engine) at a stump-pulling 1,750 rpm.
Perhaps it’s just a matter of a sedan flywheel in hatchback engine. Whatever the case, the Veloster simply doesn’t squirt forward with the authority of the Ford. There’s just no oomph to its vroom. A little quicker response to the throttle, a little more twist in the crankshaft and a little bark to the exhaust pipe is needed if the engine is to match the chassis. For its part, the standard six-speed manual transmission does its bit to help, one of the modifications for Rallyfication being a B&M short-throw shifter that promotes rapid-fire gear changes. 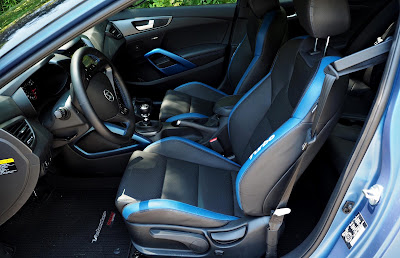 Perhaps the best news, however, is that the Rally Edition is, at $26,999, the cheapest version of the Veloster Turbo, something of a feat considering the upgrades and the fact that Hyundai Canada usually charges about $1,000 for matte paint (yes, in another triumph of style over substance, hipsters have been convinced to pay more for less gloss, not to mention less durability). The main sacrifices to cost consciousness are the panoramic sunroof (not missed) and the onboard navigation system (somewhat yearned for).


On the other hand, a 450-watt Dimension audio system belts out halfway decent tunes and the Rally Edition’s interior gets all manner of matte blue colour matching trim bits — “Turbo” trim in the seats, door handles and centre console grab handle — that prove surprisingly tasteful. I suspect that interior decor, like exterior styling, will prove the Rally’s main attraction.
The sacrifices to style, meanwhile, are that single rear door; though the rear seat accommodations are roomy, access to the passenger seat behind the driver is definitely not convenient. And the high-mounted rear “wing” may look tres chic, but it significantly reduces rearward vision, Countach-style, in the name of WRC authenticity.
Nonetheless, despite its obvious focus on style, there are finally some substantive upgrades to the Veloster’s capabilities. Indeed, save for a paucity of power, Hyundai has pumped some serious moxie into its hot hatch. And you don’t have to be a slave to oversized, fake eyeglasses and plaid sweater-vests to appreciate that.