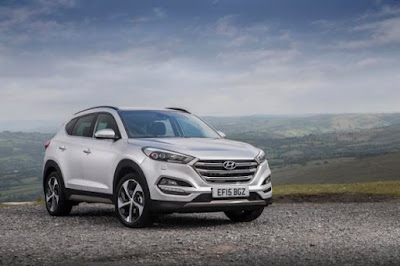 What’s new?
The new Tucson is newer than a very new thing indeed. It’s rare for a car to be completely new, but the Tucson has a new exterior, new chassis, new engines and transmissions and a new cabin, as well as some new options and features inside and out.
But more importantly a substantial proportion of the development was carried out in Europe, which should make it a better prospect on the more challenging roads in this country.
Looks and image
You only need to compare the new Tucson with the old ix35 to see where the progress has been made. The Tucson is big but sits confidently on the road with smart detailing and a quality feel; Hyundai are aspiring for premium car status and the Tucson has the looks to pull it off.
Where the Hyundai badge majors on good value the Tucson is sufficiently smart and stylish to look more expensive than it really is, which is a clever trick if you can pull it off.
Space and practicality
The Tucson is a sizeable machine and it makes the most of the space it has to offer. In the front there’s more legroom than most people will need and the headroom is good too. It’s a similar story in the back with sufficient head and legroom for full-size adults. The boot is large and well-shaped, with the option of an electric tailgate and a false floor to give a little more space. In the cabin there are plenty of useful storage areas including a generous centre console box.
Behind the wheel
With lots of new bits underneath you’d expect the Tucson’s road behaviour to be improved, but the step forward from the old car is huge. The ride quality is very impressive, soaking up bumps with ease and delivering excellent comfort for its occupants, but this doesn’t come at the expense of handling either. The steering is accurate and much more responsive than before, and although it’s no sports car it is much easier to place on the road and more relaxed to drive as a result.
The 2.0-litre diesel engine is pleasingly quiet, only really making its presence felt when recced hard, but the slick gearbox and healthy torque figure means you can make good progress without having to work it hard.
Value for money
The fact that the cheapest version of the Tucson checks in at under £19,000 is impressive, especially when you take into account the standard kit list. All models get alloy wheels, air conditioning, Bluetooth and DAB radio amongst others, while moving up to the SE model for an additional £1,500 adds tons of extra like bigger alloys, heated seats, climate control, LED brake lights, cruise control and rear parking sensors.
Who would buy one?
The Tucson is a thoroughly modern Hyundai in that it appeals on more than just price. It looks smart, is good to drive and well-equipped, and delivers a package strong enough to tempt people out of rival products that might have shinier badges. It’s the kind of car that would suit families big and small with its space and utility but it’s smart enough to cut a dash in the company car park. The price also means it’s a realistic alternative for anyone considering a mid-specification medium hatchback, which is a very tempting prospect.
This car summed up in a single word: Likeable
If this car was a…: bit more expensive it would still be a great buy.
FACTS AT A GLANCE
Hyundai Tucson Premium 2.0 CRDi, £28,945
Engine:2.0-litre diesel unit producing 182bhp and 295lb/ft of torque
Transmission: Six-speed manual gearbox driving all four wheels
Performance: Top speed 125mph, 0-62mph in 9.9 seconds
Economy: 47.9mpg combined
Emissions: 154g/km of CO2