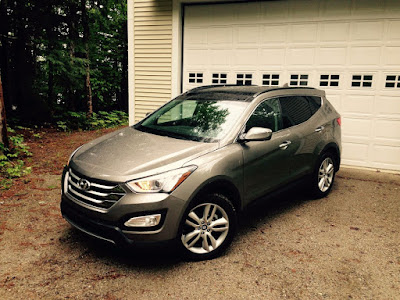 It may seem strange to think about this, yet Hyundai has only been selling cars in America for thirty years. The number seven selling brand, overall, in America, Hyundai has achieved mass success after meager beginnings. The brand has conquered doubters, increased market share, and followed a steady path of improvement, growth and viability in a very challenging marketplace.


To add further perspective, drivers younger than 30 years old have never known a marketplace without Hyundai. This is reminiscent of the challenges that Honda first faced when it came to these shores during the early 1970s. Drivers younger than 45 have never known the new car market to not have Honda’s available. The path of these two Asian automakers is not all that different.
Both automakers started with small inexpensive cars for sale in the USA. Honda arrived during the first fuel crisis years in the early 1970s, as buyers were looking for more fuel-efficient cars — which Honda was all too willing to provide. Hyundai came during the mid-’80s when retail prices were climbing and the Korean automaker offered less expensive mass transportation options. Small market toeholds in California first, and then other states, was the template each used to create greater sales.
Each automaker has built small sporty cars — perhaps Honda’s are more well-known here, while each has also done minivans, small and medium crossovers, as well as the customary sedans. Honda’s Ridgeline is an unconventional pickup, with a loyal following. Hyundai will have a similar offering next spring — to match the second-generation Honda product. Are you starting to see the parallels?
Yet, this week’s Santa Fe is different from the usual Hyundai mirroring of Honda products. The Santa Fe comes in two body styles; our 2.0T Sport is a five-passenger midsize crossover, while Hyundai also builds a three-row, seven-passenger Santa Fe that competes with the Honda Pilot, Toyota Highlander and other three row wagons. The shorter Sport is more closely aligned to battle the Ford Edge, Nissan Murano, Jeep Grand Cherokee, and its sister vehicle, the Kia Sorento. Honda builds nothing that naturally competes against the Santa Fe Sport.
Impressively, the Santa Fe Sport matches up quite nicely against its rivals, beating them all on price (no surprise there) as well as overall weight. All things equal, lighter vehicles generally drive better and return greater fuel efficiency than heavier competitors.
The Sport also delivers a comprehensive interior presentation that is pleasing to look at, simple to use and soft to the touch in those areas that a human will interact with the many textures and surfaces. With finer surfaces and better visuals than even Toyota’s updated Highlander, the Santa Fe is not embarrassed by its lower price — it just proves that more money doesn’t assure quality. 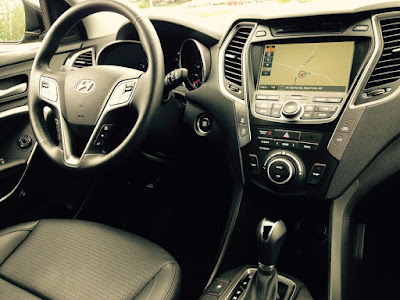 Several pieces stand out. In well-equipped AWD trim (still with a locking button for additional low speed traction), our Silver Santa Fe Sport carried the upgraded engine — the 2.0T two-liter Turbo four cylinder with 264 hp and 269 pound/feet of peak torque. While most competitors run V-6 engines, the Hyundai has a lighter in-line four aided by a smooth, fast-acting turbocharger that provides ample power for all driving needs. The car is swift, responsive, and very smooth with the six-speed automatic transmission capably handling ham-fisted throttle input. With base Sport weights around 3,700 pounds — front drive, 190-hp 2.4-liter four-cylinder engine — our 4,000-pound test car almost matched the EPA highway estimates during its week-long visit; 23.4 actual MPG against a projected 18/24/21-mpg.
Right behind the powertrain is the Hyundai’s cabin spacing, cabin comfort, and cabin appointments. Front seats were heated leather, with optional cooling added in Platinum trim, while the rear seats are also heated, slide back and forth for passengers or cargo, as well as recline separately for traveling naps. Access is excellent at all four doors, while the new programmable power liftgate also reacts to keyfob access in your pocket for hands-free opening acts. Add some clever hidden bins under the wide rear load floor and the Santa Fe seems like a midsize crossover designed by real drivers rather than a clinic of automakers.
As we have come to expect, the Hyundai is loaded with features — and at prices that undercut rivals by $3,000 or more very quickly. Everyone expects traction and stability systems today, yet we are seeing a lot more electronic driving aids like downhill brake assist & hill-start assist, direct injection for the engine, blind-spot detection, as well as a clear rear-view camera. The Santa Fe 2.0T has these pieces plus electroluminescent gauges (just like Lexus) LED exterior lamps, selectable steering wheel modes (for enthusiast drivers) rear cross-traffic alerts, lane change assist, as well as push-button ignition and keyless access. There are rear sunshades, while the climate system is automatic and the HD radio includes XM.
Click all of the options and you get 19-inch alloy wheels in place of the standard 18-inchers, automatic HID headlamps, a huge Panoramic sunroof, 8-inch touchscreen navigation, 12-speaker Infinity Surround Sound, heated steering wheel and power memory seats.
Santa Fe pricing starts at $25,825. Sport AWD 2.0T begins at $33,875, while our sample car priced out to $38,350.
In a marketplace surging with crossover sales, the Hyundai is holding its own, thick in a pack of offerings of four rivals behind the class dominating Grand Cherokee.
Makes perfect sense; the latest Santa Fe is a solid offering, an all-around pleasant example of Hyundai’s strengths and what the automaker has learned from others.
In addition, like these rivals, the Santa Fe is now made right here in the U.S. of A. right in West Point, Ga. Hyundai, you’ve come a long way, baby.