The 2016 Hyundai Tucson SUV that goes on sale this month looks like a real threat to the Ford Escape and Honda CR-V's status as the best compact SUVs on the market.

A 200-mile road test revealed that the Tucson offers a roomy, comfortable interior, a long list of appealing features and acceptable power. Its pricing and fuel economy appear to be very competitive with leading compact SUVs. 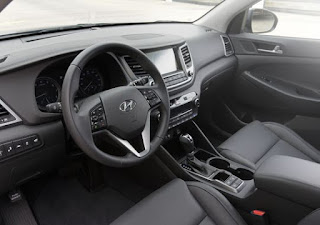 The more powerful 1.6L turbo powers both the most fuel efficient and the sportiest versions of the Tucson. The "Eco" fuel economy special gets better mileage thanks to reduced weight, smaller wheels and fewer available features.

The Tucson is shorter but wider than the Escape, CR-V and Toyota RAV4. It offers more passenger space, but a smaller cargo area than the Escape and CR-V.

The 2016 Hyundai Tucson's interior offers plenty of passenger space and features including a touch screen and navigation.

I recently spent a day driving a pair of well-equipped, all-wheel-drive Tucsons with the turbo engine and dual-clutch transmission.

The 1.6L engine's power is acceptable, but not exciting. Hyundai and other automakers have had customer complaints about dual-clutch transmissions, which can feel different from conventional automatics. The new seven-speed felt fine to me.

An impressive list of available safety features includes blind-spot alert and lane-departure alerts and automatic braking that can detect an impending impact with a pedestrian or vehicle and bring the Tucson to a halt.

Hyundai expects to sell about 90,000 Tucsons a year, about double what the old model did.