Review: Is the 2015 Hyundai Genesis Finally a Credible Luxury Sedan? 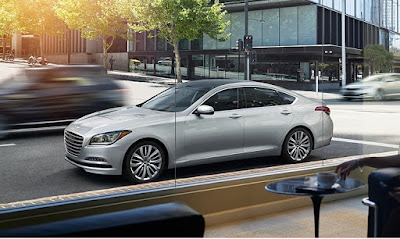 There are rumors that Hyundai will launch a separate luxury brand when it reveals its upcoming luxury SUV, but when the Genesis launched back for 2008, it made sense for the company to hold off on launching a new marque. Hyundai’s reputation was really only just starting to improve on the backs of competitive-for-the-price offerings like the Sonata and the Elantra. The Veracruz, meanwhile, had been launched to middling success as Hyundai’s first attempt at offering a slightly more premium vehicle. Spinning off a luxury brand would have been extremely risky.

Even without creating a Genesis sub-brand, building a rear-wheel-drive luxury sedan was a pretty serious gamble for Hyundai. The first generation Genesis had just as much of a chance of going down in history as a bigger failure than the Volkswagen Phaeton as it did of becoming a success. Somehow though, dealers were able to convince enough people to spend $40,000 on a fancy Hyundai that the company started work on a second generation.

But the Hyundai that launched the second generation Genesis is far from the same company that launched the first generation sedan. Its reputation in the U.S. has improved drastically in that time, and while the new Genesis is still large and expensive, the Equus is even larger and even more expensive. Combine all that with the success of the first generation sedan, and Hyundai had a license to make its successor more than just a luxury bargain. It could spend the money to turn it into a true luxury competitor.

So did Hyundai succeed at building a credibly BMW 5 Series competitor, or is the second generation Genesis one more example of a car that’s close but not good enough? A few weeks ago, Hyundai gave me the opportunity to test the V6 version equipped with New England-friendly all-wheel-drive, and I had the opportunity to find out.

One of the biggest criticisms of the first generation Genesis was that its styling was a bit bland and derivative. It certainly wasn’t unattractive, but its looks were forgettable at best. That’s been changed in the second generation’s design, with large headlights and an upright grille giving the Genesis a distinctive look. The styling is still fairly conservative, but it’s attractive in its own right. Some photos don’t always make the design look its best, but you won’t have that problem as much in person.

While I like the design, there’s no escaping that the Genesis is a very large car. Much like the Chrysler 300C that I also drove recently, it barely fit in my driveway and never quite felt like it was comfortable on Boston’s narrow roads. It did shine, however, in the comfort department. 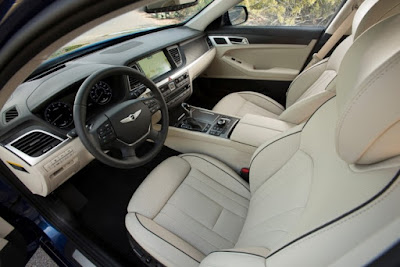 The aluminum accents were a nice touch, and the matte-finish wood trim gave the interior a high-end feel that paired well with the leather. Some of the interior plastics didn’t feel quite on par with the rest of the more luxurious touches, but nothing felt flimsy or poorly put together.  The seats ended up being surprisingly comfortable and fit my body exceptionally well. What can I say? Being a 50th percentile male has its perks.

I didn’t get a chance to road trip to New York City in the Genesis, but I gladly would have. It might have even been a more comfortable choice than the Chrysler 300C was.

I did, however, take it for a long drive one evening in search of stress relief and some better driving roads. Frustrated with the crowded streets around my house, my plan was to head in the general direction of the middle of nowhere and see where I ended up. It ended up being incredibly relaxing, partly because of how well the suspension ironed out the sea of imperfections that Massachusetts calls roads.

Even in sport mode, the Genesis never felt like a full-on sports sedan, but how much sportiness can you really expect out of a car that’s more than 16 feet long? It was confident and composed through any turn I tossed it into, but doing so always felt a bit out of character – like a dad doing a shot with his son at the bar on parents weekend before going back to sipping his glass of Eagle Rare. It’s not that he can’t handle it. He’s just a little too sophisticated for those kinds of shenanigans.

Under the hood, the 311-horsepower V6 felt perfectly-suited to the car. Hyundai offers a 5.0-liter, 420-horsepower V8 as well, but the V6 is the better choice. I had a chance to briefly drive the V8 version of the Genesis about a year ago, and while it’s certainly faster than the V6, the ride is too quiet and isolated to truly feel how much faster it is from the driver’s seat. If you’re considering a Genesis, save your money and go with the more fuel-efficient V6 instead. 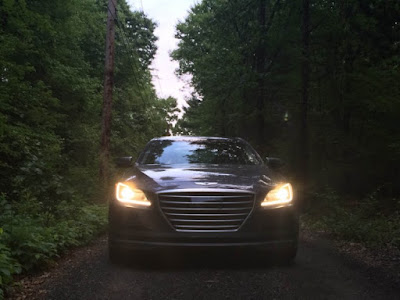 Much like the 300C, where the Genesis really shone was as a luxurious cruiser. You’d have to spend a lot more money to find a nicer place to spend several hours whether you’re aimlessly exploring New England back roads or rolling down an interstate. In fact, even though the Genesis is a Korean vehicle, it’s probably the 300C’s most direct competitor. After all, they’re both luxury-minded sedans from non-luxury brands built on rear-wheel-drive platforms. With a V6 and all-wheel-drive, their MSRPs are also $105 apart before you start adding options.

Once you do start adding options, the Genesis will probably come out a few thousand dollars more expensive, but even so, I would have a hard time recommending the Chrysler over the Hyundai. The 300C certainly isn’t a bad car, and anyone who likes its styling more than the Genesis is completely justified, but in so many areas, the Hyundai felt just a little bit better. All those little bits add up though, and after driving both back-to-back, the Genesis was definitely my favorite.

Heading upmarket, the comparisons definitely get a little more difficult. From purely a price perspective, the Genesis definitely beats the Germans. A base model BMW 5 Series starts right where a fully loaded, rear-wheel-drive Genesis V6 stops. You even can add all-wheel-drive to the Genesis and still spend less than you would on the least expensive Mercedes E-Class. Long term ownership will also save you even more money when you consider that Hyundai’s spectacular warranty applies to the Genesis as well.

If you want to make the logical choice with your money, you should definitely go with the Hyundai over the Germans. The thing is, though, spending more than $50,000 on a car isn’t a logical choice. I guarantee that no matter how many potential luxury sedan customers I recommend the Genesis to, the vast majority would still choose the German car they wanted in the first place. That’s unfortunate, because the Genesis really is a very good car.

By now, Hyundai has seen that the Genesis can sell. With a Genesis-based SUV coming soon, hopefully Hyundai can also see a case for spinning off its own luxury brand to sell its premium vehicles under. Perhaps that will be enough to earn the Genesis sedan the attention it deserves.