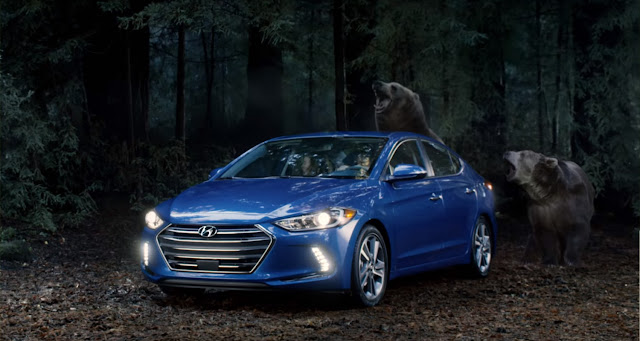 Hyundai's 'The Chase' ad has become the most-viewed Super Bowl 50 commercial on YouTube, topping ads from the likes of Mountain Dew, Pokemon, Doritos, Snickers and Mini, according to Google.

'The Chase' is one of four ads created by Hyundai and shows two hikers being chased by bears before escaping in their new 2017 Elantra thanks to the car's remote-start function. At the time of writing, it has been viewed more than 21 million times on YouTube.

Two other ads from Hyundai are also in the top 10 list compiled by Google with 'First Date' starring Kevin Hart in fourth place and 'Ryanville' with Ryan Reynolds sitting as the seventh most watched Super Bowl ad of 2016.

'First Date' is our personal favorite with comedic genius Kevin Hart playing an overprotective father stalking his daughter on her first date thanks to his Hyundai Genesis and its remote tracking system.

The only other automotive ad in the top 10 is Mini's '#DefyLabels” spot created to promote the new Clubman.

In total, ads and their teasers from Super Bowl 50 have been viewed over 330 million times on YouTube and during the Super Bowl itself, viewers watched a combined 300,000 hours of ads.