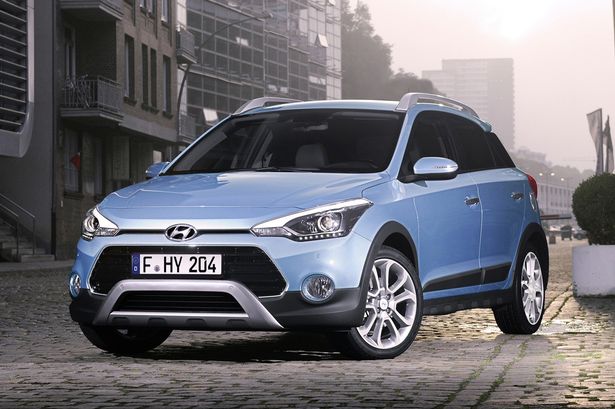 The person at Hyundai who came up with the idea of the i20 Active only deserves an extra Custard Cream with his coffee, but certainly not an all expenses paid holiday on the Isle of Wight.

Why? Because for the Korean firm to build this car was a no-brainer. Everyone is buying crossovers, whether they’re £30k Audis or £13k Renaults.

Hyundai is doing very well with its new Tucson but could really do with a car that sits underneath that in the price range.

There’s meant to be such a car on the way but there’s no sign of it yet. What to do in the meantime? Jack the i20 up on its suspension by 20mm and add a body kit that makes it look a bit more macho. Or in car marketing speak, turn it into a car for people who have an active lifestyle.

The result is not unappealing. It looks more distinctive than the ordinary i20 – which is an attractive looking car anyway – with its up-on-tiptoes stance, black cladding around the wheelarches and rubbing strips above the sills. All really for show, but the extra ride height will make going up farm tracks slightly easier.

We’re testing the i20 Active 1.0 T-GDI, priced at £15,225 on the road or £15,775 if you go for the optional Pearl paint finish. This model is fitted with Hyundai’s (shared with Kia) all new 1.0-litre three-cylinder turbocharged engine.

It’s available with two power outputs: 100bhp, which our test car is fitted with, and 120bhp. The former comes attached to a five-speed manual gearbox and the latter a six-speeder. We also drove an i20 Coupe with the bigger power unit.

Unlike some three-cylinder engines (Vauxhall’s for example), the Active’s isn’t fitted with balance shafts to iron out vibration. An honest Hyundai engineer at the car’s launch said that they didn’t fit them for cost reasons, but he could have got away with saying that the engine doesn’t really need them, because it doesn’t. You can certainly feel that it’s a three-cylinder but I like the uneven thrum as it adds character.

And the i20 can do with all the character it can get.

What’s really refreshing about the whole i20 range – and Hyundais in general – is the simplicity of the controls, instruments and displays. Need the USB socket? It’s right in front of you at the bottom of the center console along with two 12v sockets.

Our test car does without sat-nav and instead has Hyundai’s neat smartphone mount that slots into the top of the dashboard.

The 120bhp that we tried in the i20 Coupe certainly feels more punchy when you’re overtaking and it’s helped by sensible ratios in the six-speed gearbox. But the lower- powered version of the motor works well, too, and doesn’t feel a lot less powerful when you’re only pootling about.

Raising the i20 hatchback up 20mm to turn it into an Active has a noticeable affect on the cornering as there’s a touch more body roll and the steering feels less precise than it does in the Coupe. It’s not enough to make buying the Active an unwise choice, however.

The cosmetic add-ons simply give the i20 Active more showroom appeal and for many customers that will be enough. For others, particularly older customers, the extra height off the ground could make getting in the car easier.

The i20 Active is a handy addition to Hyundai’s catalogue, but what the company really needs is a proper crossover that costs around the same money – just take a look at rivals such as the Renault Captur and Mazda CX-3.