It isn't bigger, but it has grown up: Introducing the all-new 2017 Hyundai Elantra 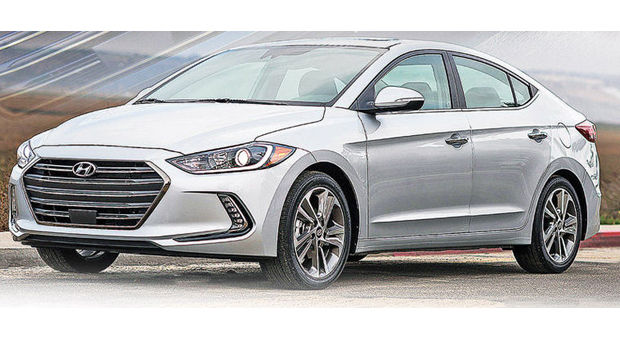 When you think of the major players in the compact-car category, the Elantra stands tall alongside the Honda Civic, Chevrolet Cruze, Toyota Corolla and Ford Focus.

How it reached this level is a testament to Hyundai’s spare-no-effort approach to designing and building a vehicle that is larger than it looks, provides more creature comforts than you would expect and offers plenty of driving enjoyment.

Hyundai has also proven that it’s fearless when it comes to re-engineering one of its top sellers. With each successive Elantra, the automaker has carried over little if anything from previous iterations and that certainly goes for the sixth-generation model that’s now on sale.

Although the car’s key dimensions have changed little from the previous model, the sheetmetal is quite different. The prominent hexagonal grille follows the same pattern as the mid-size Sonata, while the doors, fenders and rear deck are more subtly shaped. The Elantra’s newfound conservatism is in stark contrast to the past design brashness. It’s as if the car is aging at least as gracefully as its customer base.

There’s certainly nothing old about the Elantra’s interior that eschews the exaggerated dashboard for a more straightforward and grownup appearance. It’s an effect that Toyota uses to its advantage and one that Hyundai seems to be emulating. For passengers, a reshaping of the seats has yielded a bit more cabin space, although the new-for-2016 Honda Civic reigns supreme in this regard while the Toyota Corolla and Mazda3 also provide greater personal room.

A redesign of the Elantra’s platform has led to a stronger and stiffer body structure. It’s also lighter and, along with an all-new rear suspension, is designed to deliver a better driving experience plus added comfort and quietness for passengers.

The new Elantra brings with it a choice of two new engines that stress fuel economy over raw performance. The new base unit is a 2.0-liter four-cylinder that puts out 147 horsepower and 132 pound-feet of torque. This replaces the 145-horsepower 1.8-liter four-cylinder. The 2.0 can be connected to a six-speed manual transmission (but only on the base model), or an available six-speed automatic.

Optional — and available a few months after launch — is a turbocharged 1.4-liter four-cylinder that makes just 128 horsepower, but spools out 156 pound-feet of torque. This powerplant is exclusive to the Elantra Eco and comes only with a seven-speed automatic transmission.

The Turbo delivers the most torque and, with a little help from the transmission, also consumes the least amount of fuel. It’s rated at 35 mpg in combined city/highway driving, compared to 33 for the non-turbo 2.0. Those numbers aren’t tops in class, but they are competitive.

With either powerplant, you can get Hyundai’s Drive Mode Select that has Eco, Normal and Sport settings.

Elantra base pricing is pretty much unchanged from before and starts at $18,000, including destination charges. For that you get the SE model equipped with air conditioning plus the usual number of basic accessories.

That still leaves plenty of room for options, including a power sunroof, navigation system, heated rear seats, eight-speaker Infinity-brand audio system, proximity automatic trunk opening (it unlatches when standing close with the fob in your pocket), push-button start plus many high-tech safety features that have trickled down from more luxurious cars. Note that the Eco trim’s standard and optional content isn’t known yet, but will likely approximate that of the Limited.

The new Elantra might appear more buttoned-down than before, but it’s consistent with the kind of quality image that other modestly priced vehicles are projecting.