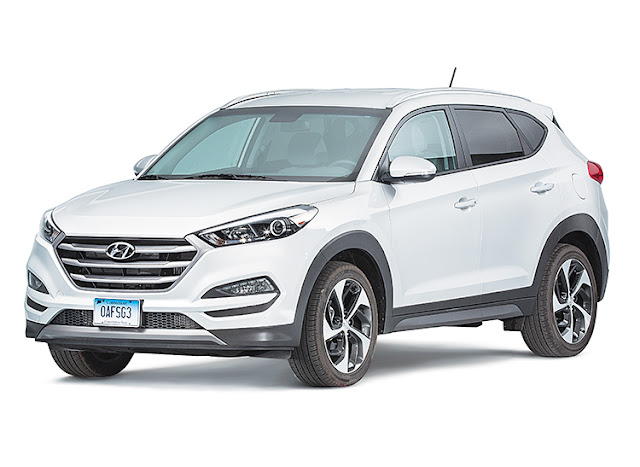 Unexciting but practical. Solid transportation that gets you from point A to point B. Those are the damn-with-faint-praise platitudes that some auto enthusiasts use to dismiss vehicles like the Hyundai Tucson. But many consumers don’t want—let alone need—the ‘wow’ factor. They seek a competent, workmanlike ride and a headache-free ownership experience. That everyday reassurance is what made Toyota the powerhouse that it is. Now Hyundai is trying on those same sensible shoes.

Although the exterior design of the Tucson hints at flash, the rest of this compact SUV is as generic as store-brand soda. But basic doesn’t mean bad. The Tucson’s 2016 redesign lifts it from a perennial also-ran right up to the forefront. It’s a centerfold for sensibility.

Two powertrains are available: a 2.0-liter four-cylinder with a six-speed automatic transmission that comes only on the base SE trim and a 1.6-liter turbocharged four-cylinder with a seven-speed dual-clutch automatic on the three uplevel trims. It might seem odd that more expensive versions get a smaller engine, but this is the new world order, with small turbo offerings usually the more satisfying alternative.

In terms of engine performance, the base Tucson SE is saddled with a poky 11-second 0-to-60 time as well as an underwhelming 24 mpg overall that’s matched by other, quicker competitors. Its shifting is often stiff, especially at wide-open throttle, which you’ll often use to get any exertion from the engine.

The Sport is quicker than the SE yet gets better mileage, tying the segment-leading Subaru Forester at 26 mpg overall. Its dual-clutch transmission quickly delivers thrust to the wheels, but it has a jarring wait-and-snap routine if you perform a rolling “California stop.” First you’re dead in the water while the clutches sort themselves out, then the turbo eventually spools up and bashes you with an angry shift from first to second gear.

Handling is responsive, nimble, and secure, with only subtle differences between the base SE and uplevel Sport models. In fact, in some ways the SE was sportier than the Sport despite its narrower 17-inch tires, particularly in at-the-limit handling on our test track. The Tucson’s ride is settled, and it absorbs most bumps and ruts—a big deal in a class where most entrants are jittery and uncomfortable. Braking is excellent.

The Tucson feels especially roomy and spacious for a compact SUV, with an open and airy cabin that offers easy access and a family-friendly rear seat. Head and knee room are generous; even short drivers can sit up high with a good view out the front. The interior is one of the quietest in this typically not-so-hushed category.

The seats are sufficient for urban romps, although there were some complaints about bottom cushioning needing more support on longer trips. The cargo area can swallow three large suitcases; a cargo cover costs extra.

In an era when infotainment systems are becoming inscrutable, the Tucson’s controls are a model of simplicity. The cabin trim is rudimentary but neat. All of the door-panel plastics are hard; the dashboard has some soft-touch material, but much of it is far away beneath the windshield, where no one will ever touch it. Components fit together well, with minimal gaps. Again, not flashy, just competent.

The Hyundai Tucson is an Insurance Institute for Highway Safety Top Safety Pick Plus, thanks to good crash-test results and an available slate of crash-avoidance features.

Most trims come equipped just one way, with only a choice of color and front- or all-wheel drive. Our SE, at almost $26,000, was quite spartan and lacked a power driver seat and lumbar adjustment. Heated seats and a power tailgate were appreciated on the Sport, but at almost $29,000, it lacked a sunroof and automatic climate control.

The most appealing combination would be the Sport’s turbo with the SE’s 17-inch wheels and regular automatic transmission. It’s too bad the best version is the one Hyundai doesn’t build.