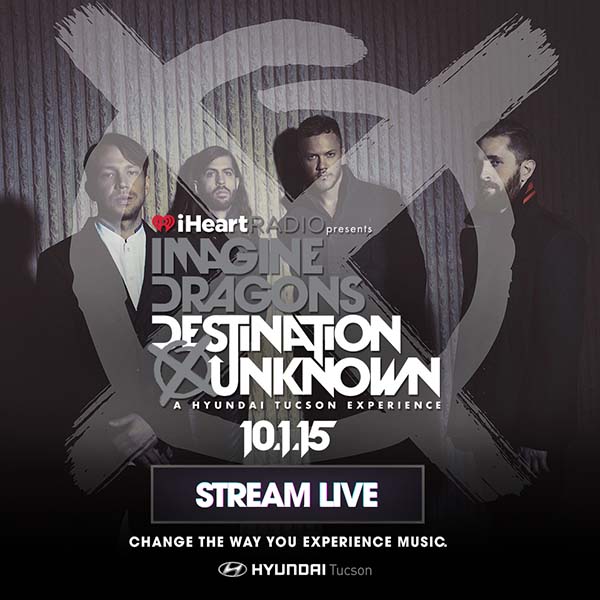 Using the hashtag #DestinationUnknown as a call-to-action on social platforms, digital banner ads and the radio ads, fans were alerted for a chance to win tickets to the secret Imagine Dragons show. Four "super fan" teams were then chosen from the pool of ticket winners to participate in the hunt and complete challenges to collect letters leading to the secret location of the concert. Each team solicited help from their social community in solving the challenges and posted the letters as a reward for the help. With each letter posted using #DestinationUnknown, fans online were able to help solve the mystery and also win a chance at VIP tickets to go to the show and meet the band. The special concert was also streamed live on Clear Channel Outdoor Americas' billboards in New York's Times Square. The event streamed on iHeartRadio and was broadcast on iHeartMedia Alternative, Mainstream Rock and Active Rock radio stations throughout the country.

The Hyundai Tucson Destination Unknown super fan experience was captured throughout the journey in two original videos now available on Imagine Dragon's Vevo channel, iHeartRadio's YouTube channel and iHeartRadio.com/DestinationUnknown, as well as Hyundai digital platforms.
"We are excited about the campaign because of the authenticity of the messaging when it comes to fan engagement," said Dominic Sandifer, president and co-founder of GreenLight Media & Marketing. "The Destination Unknown campaign with Hyundai, iHeartRadio and Imagine Dragons is an example of how GreenLight creates brand engagement through compelling content and brand storytelling, tapping into the passion points of various artists and cultural icons to create mutually beneficial partnerships and audience experiences."

About iHeartMedia:
With 245 million monthly listeners in the U.S., 87 million monthly digital uniques, over 75 million social followers and 196 million monthly consumers of its Total Traffic and Weather Network, iHeartMedia has the largest reach of any radio or television outlet in America. It serves over 150 markets through 858 owned radio stations, and the company's radio stations and content can be heard on AM/FM, HD digital radio, satellite radio, on the Internet at iHeartRadio.com and on the company's radio station websites, on the iHeartRadio mobile app, in enhanced auto dashes, on tablets and smartphones, and on gaming consoles.
iHeartRadio, iHeartMedia's digital radio platform, is the No. 1 all-in-one digital audio service with over 700 million downloads; it reached its first 20 million registered users faster than any digital service in Internet history and reached 70 million users faster than any other radio or digital music service and even faster than Facebook. The company's operations include radio broadcasting, online, mobile, digital and social media, live concerts and events, syndication, music research services and independent media representation. iHeartMedia is a division of iHeartMedia, Inc. (OTCBB: IHRT). Visit iHeartMedia.com for more company information.
About GreenLight Media & Marketing
GreenLight Media & Marketing, LLC is an award-winning entertainment studio and agency producing original content and marketing programs for a variety of media companies and brands. GreenLight's clients and partners have included The GRAMMY's, AOL, Fuse, Vibe, Spin, YouTube, Pandora, Hyundai, Under Armour, Intel, Logitech/Ultimate Ears, American Express, Gillette, Pacifico, Red Bull, Verizon and Constellation Brands, among others. Based in West Hollywood, CA, GreenLight is an independent entity within a network of sister companies that includes Red Light Management, ATO & TBD Records, and several major music festivals. GreenLight is the recipient of Ad Age's 2015 Small Agency Award: West.