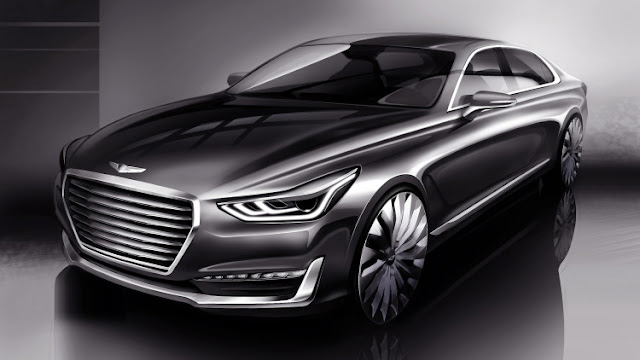 Hot on the heels of the announcement of the new Genesis luxury brand, Hyundai is rolling out the first model in its lineup, the G90. Previewed in this image, the sedan will replace the Equus at the top of Hyundai's lineup and launches next month in Korea. It will wear the EQ900 badge in its home market.

Penned in the company's new Prestige Design Division, the styling has obvious links to the new Genesis sedan (which will also get an alphanumeric nameplate) and the Vision G Coupe concept (which will likely lead to a production two-door). That means more straight lines than the curvier Equus, along with more upscale details. From the limited angles at which we're viewing it, the design appears to bear some similarities to other luxury automakers like Audi (around the headlights), Mercedes (at the tail), and even Bentley (towards the back of the greenhouse).

The G90 will kick off the launch of the new Genesis brand much in the same way that Toyota launched the Lexus brand, Honda begat Acura, and Nissan gave birth to Infiniti. The G90 will be the first of six new Genesis models to launch by 2020.

Woong-Chul Yang, Head of Hyundai Motor R&D Center and Vice Chairman of Hyundai Motor, said, "Genesis' new large luxury sedan G90 will deliver a concept of 'New Luxury' to our customers. The G90 sits at the pinnacle of the Genesis brand and demonstrates how we apply our human-centered values to give our customer true satisfaction in every aspect of the vehicle ownership experience."

As the Genesis brand's flagship model, G90 is a blueprint for change and innovation that will distinguish the Genesis brand. Majoring on 'human-centered' technology combined with engaging driving dynamics, G90 boasts a raft of world-best safety features and technological innovations to set itself apart in the luxury market.

Hyundai Motor created the Genesis brand for a new generation of discerning consumers. Capitalizing on its success in the fast-growing global car market, Hyundai Motor will launch six new Genesis models by 2020.

The launch of G90 is scheduled for early next month in Korea.
Source
Posted by Hyundai Dealer at 3:00 PM