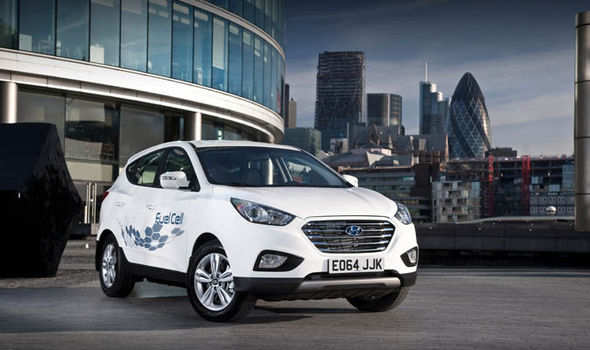 A Hyundai ix35 Fuel Cell – the world’s first commercially available hydrogen-powered car – has completed a 50-day driving challenge in London that covers all the routes included in the famous Knowledge that London black cab drivers have to know before obtaining their license.

The car drove, photographed and filmed every central London street, covering a total of 2092 miles, emitting nothing but water.

The car was fitted with special equipment and bespoke software that enabled it to capture 503,919 images, which have been used to create a 6m x 2m mosaic, a digital continuous image of all London’s streets, that depicts Oxford Street (voted as the most iconic street in London) and will go on display at City Hall in March 2016, as part of London’s Hydrogen Week.

A 200.5 second time-lapse video (marking the launch of Hyundai Motor UK in 2005) was also created.

The drive was mapped by the Ordnance Survey team that delivered the Olympic torch route, the first time the famous Knowledge has ever been routed as one continuous drive to cover every street.

A total of 127 drivers participated in the challenge including British Olympic boxing champion Nicola Adams, reality TV star Jamie Laing from Made In Chelsea, WRC driver and co-driver Thierry Neuville and Nicolas Gilsoul – and us at the Daily Express Motoring desk.

Despite the futuristic technology and use of hydrogen – the chemical energy from which is converted by the fuel cell into electrical energy – the ix35 Fuel Cell drove just like a conventional petrol or diesel version of the Hyundai crossover.

Apart from the fact that it is, like an electric vehicle, almost totally silent when in operation.

The ix35 Fuel Cell has 134bhp electric motor that allows it reach a top speed of 100mph.

Two hydrogen storage tanks, with a total capacity of 5.64kg, enable the vehicle to travel a total of up to 369 miles on a single fill, making it a practical green alternative to conventionally fueled cars.

Or at least it would be if there were more than the current four filling stations open to the public in the UK (at Heathrow, Hendon, Swindon and Teddington).
But our experience of driving the car around the streets of south-west London was completely positive: silent, safe, pollution-free and with almost no need to adapt your driving style.

Is hydrogen the future?

Perhaps, if someone invests in a refueling infrastructure.