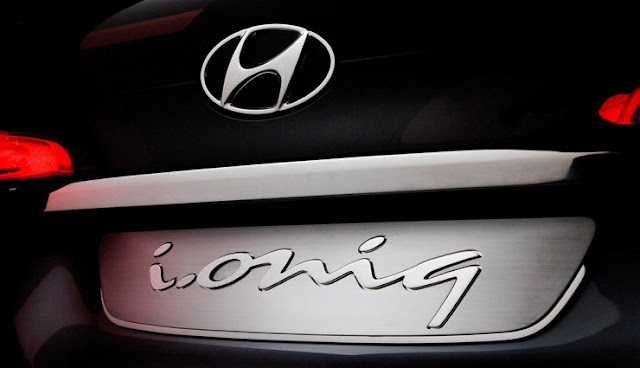 Over the next few years, Hyundai and Kia plan to launch a slew of new green models as part of a bid to take the number-two slot (behind hybrid powerhouse Toyota, presumably) in green-car sales.
One high-profile addition to the lineup will be a dedicated hybrid model for Hyundai designed to compete against the Toyota Prius. Like the Prius, it won’t be based on any existing model, although a new report claims it could borrow a name from a 2012 Hyundai concept car.

Hyundai Ioniq will be the name of the Prius-fighting hybrid according to AutoGuide, which claims to have discussed the matter with sources aware of Hyundai’s product plans. It also reports that Hyundai registered the name with the Korean Intellectual Property Office on June 5 of this year, and also applied to trademark the name with agencies in Europe, Malta, the U.K., and Canada in July. It reportedly applied for a trademark of the Ioniq name with the World Intellectual Property Organization at that time as well.

The name seems to come from a 2012 concept car called the i-Oniq. This was an extended-range electric car that used a 107-horsepower electric motor for propulsion, with a 1.0-liter three-cylinder gasoline engine acting as a generator. The i-Oniq was a small hatchback, so it’s at least in the same ballpark as the production hybrid, styling-wise. The hybrid is expected to be a five-door hatchback with aerodynamic styling, similar to its Prius rival.

The dedicated hybrid is just one of many new models that will appear over the next few years as Hyundai looks to expand its green-car lineup. The Korean carmaker will launch an all-electric model as well, and continue to sell hybrid and plug-in hybrid versions of the Sonata midsize sedan, and a fuel-cell version of the Tucson crossover (in California, at least).

Meanwhile, companion brand Kia will get its own version of the Prius-fighter hybrid, and an Optima plug-in hybrid that uses the same powertrain as the Sonata. It will also continue to sell its Optima Hybrid (which may get some updates as well), and the Soul EV electric car.