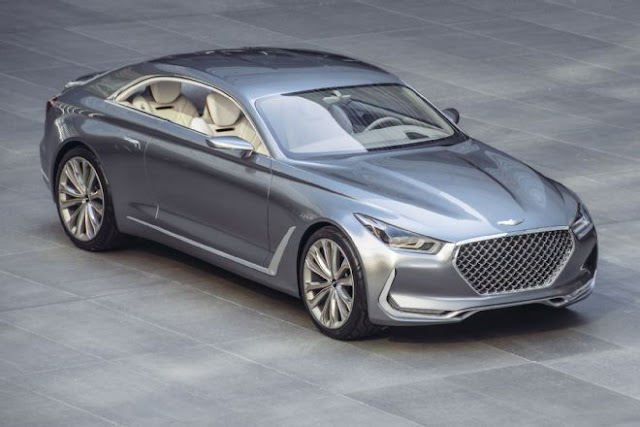 It was a nice occasion, totally unexpected: a chance to see a new concept car before any public presentation. The invitation was especially attractive since the car was coming from Hyundai, a firm with two top designers in charge, Peter Schreyer overall and Chris Chapman heading the California studio. Even so, my initial reaction to the car was, "How could this happen?"
Reflecting later, I know how: Someone unqualified got between the creators and the car. The best designers in the world can't save a project if an executive with more influence than design sense is somewhere in the decision tree, imposing his uninformed will as a sign of power. I know of a European project where the design's graceless rear was imposed by the chief executive, the awkward front by his successor. The result: essentially unsalable. I suspect something of the sort happened to the Hyundai Vision G.

That there should be a rear-drive coupe equivalent of the V-8 Genesis sedan is obvious, and there is surely a market for a car costing thousands less than roughly equivalent German-name coupes. But I wonder if the Vision G would sell well without a substantial styling cleanup. It has far too many lines, too many odd surface changes, and the derivative grille is too coarse. The glazing is also disproportionately small for such a big, bulky exterior, but that's the style these days, so someone must like it.
Still, I found the interior design really pleasant because of its simplicity and clarity. Colors, materials, and detailing were all superior. The quantity of knobs and buttons and switches was minimized, and if there was no particular excitement about the cabin, there was the strong sense it would be a good place to be on a long trip.
Others present at the unveiling of this car at the Los Angeles County Museum of Art (where Hyundai is a longtime sponsor) before its appearance on the concept lawn at Pebble Beach were nonplussed by something else. It seemed too small to so polarize Southern California's automotive journalists, people more exposed to automotive novelty than any group in the world. But about half freaked out over the location of the door handles.
They're on the body rather than the door panel itself. That seems very intelligent, as you normally stand outside the opening arc of the door and pull the door itself toward you, so it's between you and the opening. Unfortunately, you would go farther out in the street to go around the door and enter the car. That's not a pleasant prospect in heavy traffic. This door is powered open, like some SUV hatches, so you stand behind it then walk forward to enter, not getting any farther into traffic than the door itself. If manufacturers use a wireless network within a car to operate various functions (which I think will happen soon), the door latch and the handle need not connect in any way, not even by wire. To eliminate yards and pounds of a wiring harness would be a great progress. So the odd detail that caused the most negative commentary may well be the single most important feature of this Hyundai. 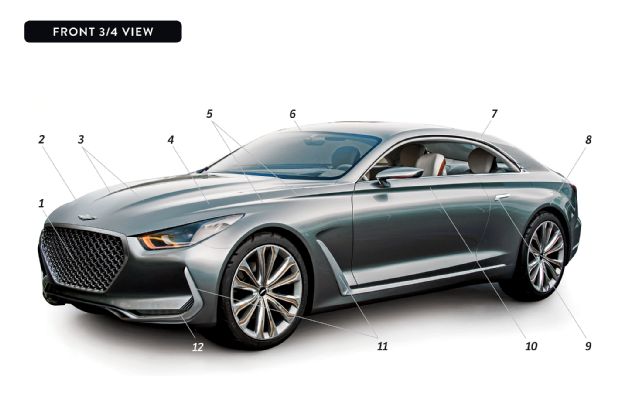 1. The grille: too big, too Bentley, so too bad. But the perimeter is actually rather nice and integrates with the headlamps better than most grilles do. So apart from the texture, give it a pass.
2.This badge, too, is reminiscent of a certain Cricklewood insignia. Isn't there some graphically resplendent Korean letter or sign that could proudly stand for Hyundai?
3. These lines defining a bulge on the hood are once again evocative of past British practice, this time by Jaguar.
4. This near-vertical wall fades before it reaches the grille rim (forward) or the A-pillar (aft).
5. A pair of confused and confusing lines, with the one on top of the front fender ending just below where one created by an undercut coming off the rear fender fades to nothing.
6. The windshield seems rather small for a big coupe. The lack of anything but a black band defining and separating it from painted surfaces seems a little cheap.
7. The roof profile is more sedanlike than the form that usually describes a true coupe. It does, however, allow really good rear headroom.
8. The flat band around the circular rear wheel opening terminates a bulge that comes from the rear fender profile imposed on the body side and stops at the rear door cut.
9. The defining feature for the naysayers and those not too deeply conservative in their design sense. Yes, I like it and hope to see it again on many cars.
10. The shadow created by the fairly tight radius in the metal above the undercut that starts at the forward peak of the taillight makes for a really nice spear shape on the body side, achieved without appliqué trim.
11. Similar brightwork elements frame the round wheel opening in a soft-topped parallelogram that appears created by the hockey-stick sill trim piece.
12. It's perhaps a bit convoluted, but the bumper brightwork is a rather nice graphic element on the dead-on front end. 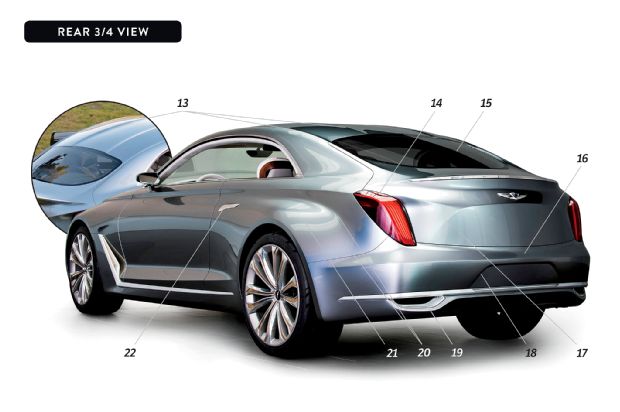 13. Four longitudinal ribs in the roof define the CHMSL bump and inset the roof from the body sides before fading into the decklid.
14. A very odd joggle in the skin above the taillight seems more mistake than feature.
15. The back light seems unreasonably small for a fairly big car like this and provides only very poor rearward visibility. A bump-up in the upper profile accommodates the CHMSL.
16. This soggy line from taillight to taillight is hard to understand. It might decrease the liftover height for the trunk, but it clashes with other curves above it.
17. Another really odd line, this flattened arc recalls the imitation "Continental kit" shape embossed on Lincolns for far too long, intersecting with the taillight opening rib.
18. The trapezoidal indent for the license plate is subtle but breaks up what could have been a clear horizontal band on a rather messy rear view.
19. The exhaust outlets under the horizontal bright trim strip look like the unconstrained work of the designers, a nice graphical composition.
20. Two negative surfaces intersect peculiarly. One separates the body sidewall from the bulge; the other, the bumper top surface from the bulge.
21. A pretty big bulge out of the body side to the wheel opening vertical band is not particularly attractive.
22. I don't question the placement. I do question the unusual irregular profile of the bright door command and its orientation, seemingly unrelated to any line or feature of the car.
23. The light-colored headliner gives a sense of spaciousness despite a rather small windshield and backlight. 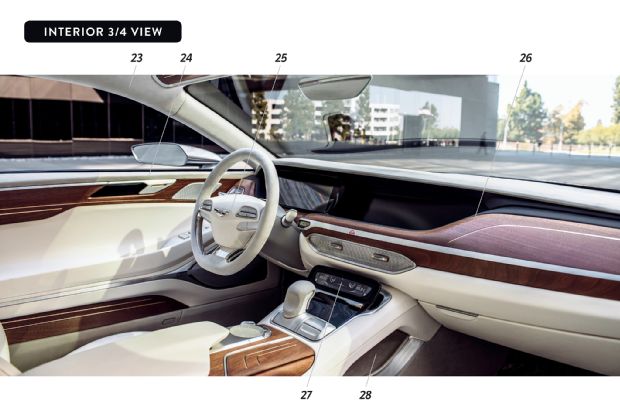 24. The side panel trim is refreshingly simple but also good in conveying a relaxed dynamic suggesting comfortable movement.
25. The steering wheel center recalls Spielberg's E.T. perhaps, but it's good not to have the perpetual center circle. Good design choice for a non-sports car.
26. Really refreshing main panel with clear horizontal lines to the glare shield and a sensuous wooden section that frames the read-out screens above.
27. So few knobs and buttons! I hope others will copy this drive for simplicity.
28. Apparently a little cubby for sunglasses, gloves, other small items. Good idea.
Source
Posted by Hyundai Dealer at 8:00 AM