Changes push 2016 Hyundai Tucson back in the pack 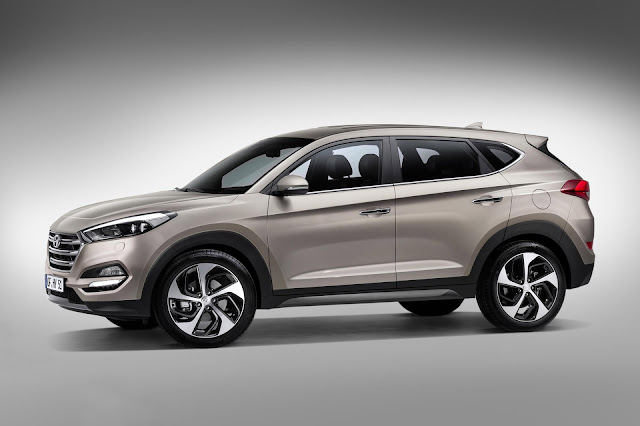 The ★★★ 2016 Hyundai Tucson Sport AWD takes a step back from the memorable styling that briefly distinguished Hyundai. The result is an SUV that blends into the pack, despite a roomy interior and competitive price.

The Tucson competes with SUVs like the Chevrolet Equinox, Ford Escape, Honda CR-V, Kia Sportage, Nissan Rogue, Toyota RAV4 and Volkswagen Tiguan. None of those SUVs  is intended for off-road use.

At 176 inches long, the new 2016 Tucson is 2.8 inches longer than its predecessor, but still smaller than all its key competitors except the Tiguan and Sportage, both of which will soon be replaced by new models. Despite that, the Tucson has one of the roomiest passenger compartments in the increasingly popular class of compact SUVs. The Tucson’s cargo capacity ranks roughly in the middle of the segment, well behind leaders like the RAV4, DR-V and Escape.

The Tucson’s looks are unremarkable. Its profile is similar to most of its competitors. The big hexagonal grille and Hyundai badge make it recognizable from the front.

The hatchback opening is wide and accommodating. Mine had what Hyundai calls a “smart” tailgate. It’s supposed to open hands-free when a person bearing the key fob stands near the Tucson’s rear bumper for a few moments. That’s useful when you’ve got an armload of groceries or dry cleaning, but it frequently malfunctioned during my test. The tailgate opened unbidden when I walked behind the Tucson to get to the driver’s door. I had to close it before I could drive away. It’s a small, but annoying fault.

The passenger compartment is roomy and comfortable. The front seat has plenty of storage, with a big bin in the center console. Inexplicably, Hyundai chose not to put USB, auxiliary and 12-volt outlets in that bin, where phones and music players would be secure and out of the way while you drive. Instead, they go in front of the shifter.

The controls include buttons and dials for some audio and climate controls. The five-inch touch screen on Tucsons without a navigation system is too small for use in a moving vehicle.

The 1.6-liter turbocharged engine delivers the most power and highest fuel economy. Its output of 175 hp at 5,500 rpm is relatively typical of the segment. The engine’s 195 pound-feet of torque from 1,500 to 4,500 r.p.m. beats the competition. The seven-speed dual-clutch automatic transmission worked fine, but it’s likely to earn complaints from customers who don’t realize that a dual-clutch, or DCT, automatic transmission is mechanically different from the automatic transmissions most Americans are familiar with, despite the fact that they both shift automatically, without the driver doing anything.

The Tucson is quiet on the highway. Acceleration is acceptable, particularly using the sport mode. The ride is comfortable. It handles fine on sweeping country roads, with nicely weighted steering.
The combination of the small turbocharged engine and DCT help the AWD Tucson Sport score 24 m.p.g. in the city, 28 on the highway and 26 combined in EPA tests. The combined rating is better than comparable models of the Equinox, Escape, Sportage, RAV4 and Tiguan. It’s worse than the CR-V and Rogue, both of which use yet another type of automatic transmission, the continuously variable CVT. The Tucson and all its competitors but the Tiguan use regular gasoline. The VW needs premium to get its rated power and fuel economy.

The Tucson can tow up to 1,500 pounds, which puts it in the middle of its competitive set.
That sums up the Tucson: a middling vehicle that commits no cardinal sins, but does little to rise above the crowd.

Posted by Hyundai Dealer at 9:00 AM