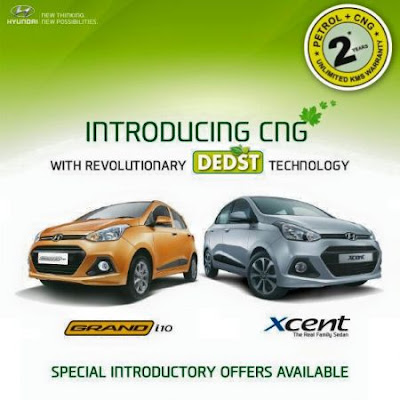 South Korean auto major Hyundai has introduced the CNG version of its popular sedan Xcent and hatchback Grand i10 in India silently to cash in on the festive season.

The Xcent and Grand i10 get the DEDST (Dual ECU Dynamic Sequential Technology) CNG Kit, which will be covered under company warranty. The company has not revealed the prices of the CNG kit. However, the dealers have started accepting the orders for the CNG kit.

Originally launched in petrol and diesel variants, Hyundai Grand i10 petrol variant packs a 1.2-litre Kappa engine, which can churn out a higher power of 70bhp and 116 Nm torque. In CNG as well, both will come powered by the same. There will not be other changes in the model. Hyundai Grand i10 is also available in LPG variant, apart from diesel and petrol models.

Recently, Hyundai India also offered cash discounts on its Grand i10 hatchback, Xcent compact sedan and Verna sedan. The petrol variant of popular hatchback Grand i10 was offered at a discount of Rs 43,000, while the diesel variant got a discount of up to Rs 40,000.