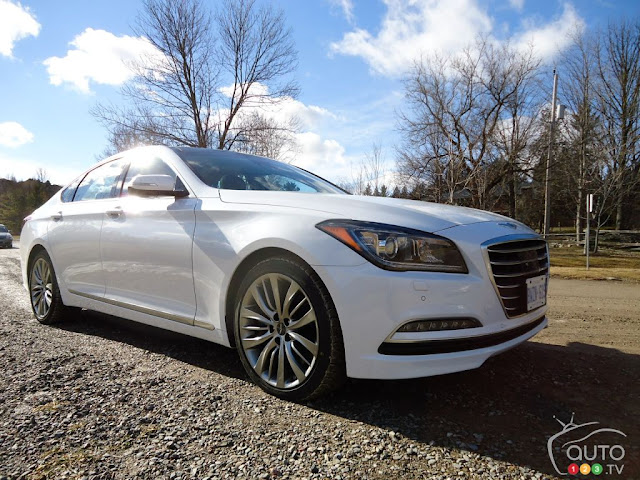 There are several phrases in the English language designed to make one feel good. “I love you” and “Congratulations, you’ve just won the lottery” spring instantly to mind. For the true car enthusiasts out there, there’s a certain surge of pride that accompanies the words: “Wow, is that your car?”

I know this to be a fact, as I experienced this several times during the week I spent with the new 2016 Hyundai Genesis 5.0 Ultimate.

Each time, I fought back the urge to say “Well, yes” and truthfully replied: “Actually, I’m a journalist and I’m given these vehicles to test.” Yet, this simply started a whole round of further questions like: “Who makes that car?” and “How much is it worth?”

So, before you join in the conversation, let me address a few questions…

What is the Hyundai Genesis?

The Hyundai Genesis originally debuted in 2008 at the New York Auto Show and drew instant attention. It was the first in a lineup of luxury sedans from what perhaps appeared to be an unlikely source. So bowled over were the automotive media that not only was the Genesis listed in Motor Trend's 2007 "Top Ten Cars Worth Waiting For," but it also went on to win the highly coveted 2009 North American Car of the Year Award and the AJAC’s 2009 Canadian Car of the Year Award. 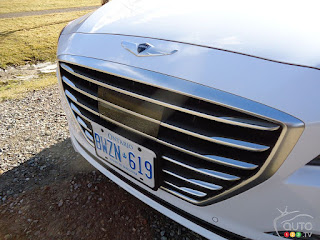 Since then, Hyundai has evolved and perfected its product to the point where the Genesis is often now compared to the likes of BMW and Mercedes-Benz.
However, the Genesis has simultaneously suffered from what might be called “Emblem Status,” which is perhaps why the company recently announced its plans to separate this luxurious sedan from the Hyundai family and establish a standalone Genesis brand.

What makes the 5.0 Ultimate so special?

Well, the second generation, launched for 2015, truly upped its game. The Genesis has always been a great product from the start, and marketed at an almost unbelievable price point. However, if you dug around, you could perhaps locate the odd disappointment here and there. The window switches were somewhat crude to the touch, and certain interior finishes were not exactly top drawer. All relatively minor details when you recalled the asking price of the first Genesis, yet these were noted by critics, so the Hyundai designers went back and took another look.

The new Genesis has become a product that’s truly worthy of comparison to other fine automotive brands while still maintaining its incredible price advantage. It’s a winning combination, delivered by a brand that is no doubt on a mission to prove itself.

The 5.0 Ultimate edition is the epitome of this line of thinking ― jam-packed with every conceivable feature one would expect from a vehicle in its price category.

From its sculptured exterior, with HID headlights and stunning, 3-dimensional LED taillights, this luxury sedan simply oozes class. However, its beauty is not only skin deep. As you slide into its premium Nappa leather seats, you’ll wonder why you’ve never considered a Genesis before. Glide your hand across that microsuede headliner and open-pore, natural walnut fascia or play with its amazing 9.2” 720HD touchscreen navigation/display unit. Or if you’re in the mood for music, crank up the 900W Lexicon audio system. This is a product that would do rather well in a game of car trumps.

If you’ve done what I’ve just mentioned, you’ll probably feel like going for a drive. You won’t need a traditional key, so long as you’ve popped the handy credit card-sized command device into your wallet beforehand. This is a nice touch, especially when you consider how many high-end competitors still make owners fiddle around with some sort of key-like device.

The 2016 Hyundai Genesis 5.0 Ultimate fires up and idles with a delightful burble. A 5.0L DOHC V8 tends to do this. It genuinely sounds playful, yet in a muted manner, in consideration of its status. That is until you make good use of its 420 horsepower and 383 lb-ft of torque, together with its HTRAC all-wheel drive system and 8-speed SHIFTRONIC automatic transmission. Play with the paddle shifters on the Genesis, and driving becomes a pile of fun. Not quite a BMW M5 or an Audi S6, but with a price tag shy of $65k, it will surprise and perhaps shock even the most jaded automobile connoisseur.

We then come to the handling part of the equation. Again, while not quite on the same level as the German products I’ve mentioned above, the Genesis 5.0 Ultimate is seriously impressive for a vehicle so affordable. In fact, with four available drive modes and Continuous Damping Control (CDC), I constantly found myself thinking, for the price, this is almost unbelievable!

What about safety features?

When you add in its 5-year/100,000km warranty, the 2016 Hyundai Genesis truly offers outstanding value for the money, and in so many ways. Sure, your friends may not instantly recognize the logo, but with many car brands lowering their pricing on entry-level models these days, perhaps that’s a good thing.

One thing’s for sure, those who do will instantly recognize you for being a super-smart shopper who goes all-out for the best deal. That should make you feel good, but maybe not as much as listening to all those people say: “Wow, is that your car?”