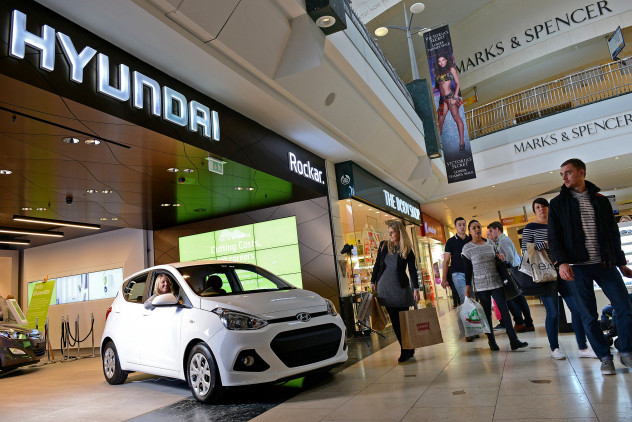 Hyundai is planning to become a top-five player in the UK car market, and Tony Whitehorn says it’s all about reacting to customers’ changing desires.

Hyundai has seen rapid growth in the UK over the past few years, and its strategy is to cement its place in the top tier of the country’s motor manufacturers.

In what Tony Whitehorn, president and CEO of Hyundai UK, calls “an interesting business dynamic” where the “product is ahead of our brand”, he says people are pleasantly surprised when they first get into a Hyundai.

Any business wants to have a top reputation, but he adds that there’s something positive to be had when expectations are exceeded.

“When people get into our vehicles, they are surprised. In a way that’s nice because our conversion rate is enormous,” he says.

The high rate of conversion from potential customers to Hyundai owners has helped the company enjoy a period of strong growth in the UK over the past few years.

“We’ve had a meteoric rise and we’ve been the fastest growing car manufacturer in the UK during that time,” says Mr Whitehorn.

“A major reason for getting where we are today is product. It doesn’t matter how strong you are or how good your brand is. At the end of the day, if your product is no good then everything else is hollow.

“We’ll get more out of what we’ve already got by brand segmentation.”

As far as drawing up a strategy is concerned, both competitors and consumers can have an influence, but Mr Whitehorn insists it’s the latter that really holds all the cards, and he uses the issue of propulsion as an example, with the demand for electric, fuel-cell, hybrid and plug-in hybrid vehicles driving the market.

But Hyundai, which moved into the UK market in 1982 and hit total sales of a million by the end of last year, has also been innovative in how it sells its cars. Historically, you cannot buy a new car on the internet without talking to a dealer but now customers can visit a Hyundai shop – its “Rockar” project – and buy one there, as well as visiting one of its 165 dealerships.

“There’s much more going on the internet, so we were the first company in the world to open a store, just like an Apple store, in Bluewater, and we also now have one in Westfield Stratford,” says Mr Whitehorn.

“We have four of our products there, there are tablets in there, and people can buy the car straight from the tablet

In terms of challenges on the horizon for the industry, Mr Whitehorn pinpoints a couple of unknowns.

“The key for any business is stability,” he says.

“On the Brexit side, if there’s some uncertainty as we lead up to June 23, everybody is going to be a little bit worried. The great thing about the UK at the moment is the stable economy. The trouble is between now and the June 23, people are a little unsure.

As far as interest rates are concerned, again it’s the slight fear of the unknown.

“One of the reasons why the car market is so strong overall is because more and more people now buy cars on finance,” Mr Whitehorn says.

Then there’s the issue of emissions – something that has had a lot of publicity recently.

“Any manufacturer that produces only petrol or diesel vehicles needs to wake up because the consumer is going to be looking for different methods of propulsion,” Mr Whitehorn says.

The well-documented Volkswagen scandal has brought mixed fortunes for companies such as Hyundai.

The evidence suggests that someone who has always opted for one of the VW brands might now look elsewhere for a new vehicle, playing into the hands of its competitors. But, as with the Toyota recalls a few years ago, there is also a flip side for the wider industry.

“The negative side of it is that people are saying, ‘It’s a focus on emissions, so let’s look at the whole of the car industry’,” says Mr Whitehorn.

“It does cascade into the industry, and there’s more skepticism, although there is a positive for the brands other than those that are being focused on.”


Source
Posted by Hyundai Dealer at 9:42 AM