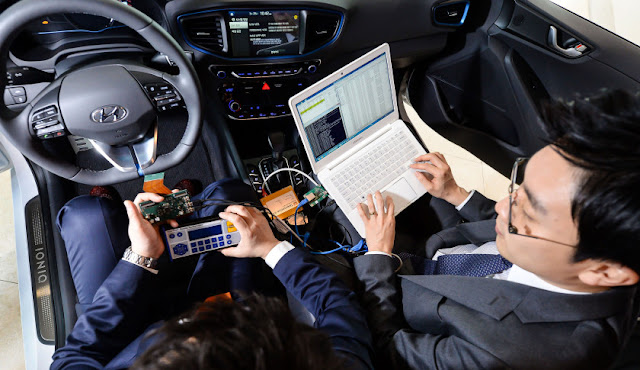 Because autonomous driving and other smart car features can’t exist without high-speed data.

Hyundai Motor Company is partnering with IT and networking equipment company Cisco to help develop the next generation of Internet-connected car services, which relies on lots of data shared at high speeds.

The partnership, which will focus on a network that will speed up and improve the transfer of large amounts of data within the vehicle, is part of the Hyundai’s wider strategy of working with tech firms to create a connected car platform for its vehicles. Hyundai and Cisco say they also aim to make communication between the numerous systems within a car more effective. For instance, an advanced driver assistance system that has automated brakes and lane steering needs to be able to communicate with cameras and sensors as well as send information to the driver through a dashboard display in the car.

For autonomous driving to progress, these systems have to communicate efficiently with each other and the driver in real time.

Earlier this month, Hyundai outlined its plan to develop smarter cars that can receive and use data faster than ever before. The automaker needs to be able to transfer data at high speeds to roll out several next-gen features in its cars, including the ability to remotely diagnose and fix vehicle maintenance issues and to communicate with city and road infrastructure—a key development for self-driving cars. Hyundai is also developing a “smart traffic” feature, in which the car will pick a better route based on real-time data on traffic and road conditions as well as security and data management for all elements of the car.

Are Internet-connected cars worth the risk?

In recent years, automakers have thrown a lot of technology into cars in a bid to catch up to the functionality of smartphones, on which people have come to rely. But adding more technology hasn’t always translated into car sales. It’s no longer enough to have a car with Wi-Fi or a Bluetooth connection that allows a driver to pair their smartphone to the car.

Now automakers are focused on doing more with the data they’re capturing from drivers to develop tech and Internet-connected features in the car that are easy to use, intuitive, and integrated with other apps or services. Just a few weeks ago, Toyota announced a new entity named Toyota Connect, which will use Microsoft’s cloud computing platform Azure to crunch data and help develop new products for drivers, businesses with car fleets, and even dealers.